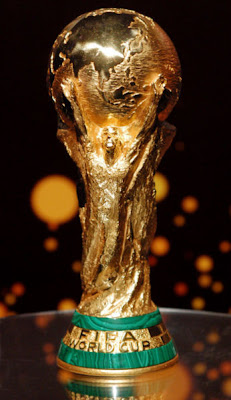 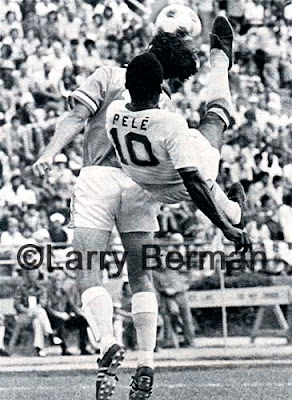 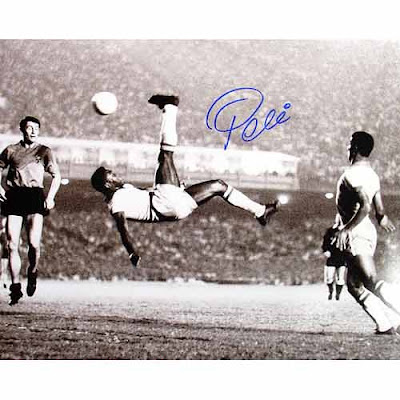 One poor little Brazilian grew to become the name and face of soccer around the world. Pele, the international champion soccer star, spent his youth kicking rocks, dribbling balls made of rags, and daydreaming of soccer greatness.Edson Arantes do Nascimento was far from that soccer stardom as he struggled through school and spent every free moment playing with his team, the Shoeless Ones - a natural name for a group of boys who simply could not afford shoes (Lesa Cline-Ransome).
Pelé's life story is the ultimate soccer dream. He began as a poor boy from the slums in Tres Coracoes, Brazil but earned fame and fortune through his talent on the pitch. Pelé's father, Dondinho, was very influential in his son's success. Dondinho was a former footballer and made sure to pass over his knowlege to young Pelé. This paid off and by the age of 15, Pelé was signed by Santos. His international debut followed just a year after on the 7th of July 1957 against Argentina at the legendary Maracanã stadium. Merely at the age of 17, Pelé was recruited to Brazil's World Cup squad. At World Cup 1958 in Sweden, he first gained attention after his goal against Wales which clinched Brazil to the next round. Pelé proved that he wasn't a fluke in the following match, scoring three goals on France. By the tournament's final, Brazilian coach Vicente Feola was confident in the talented 17-year old. His two goals at the 1958 World Cup final ascertained his status as a soccer superstar. 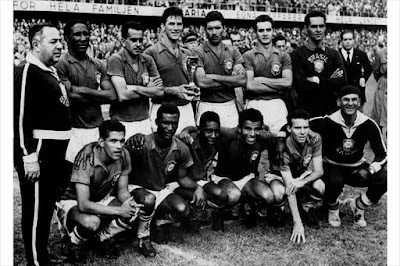 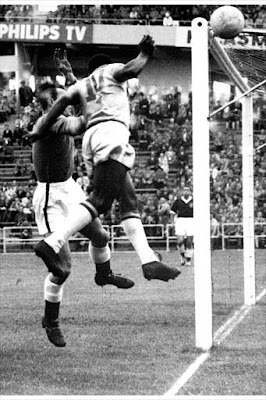 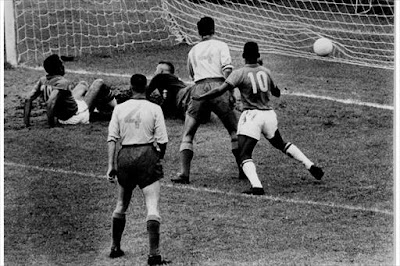 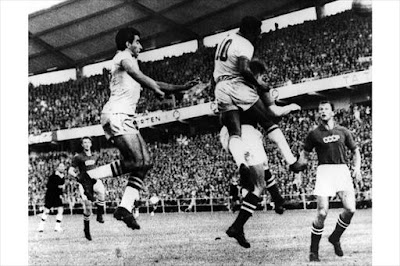 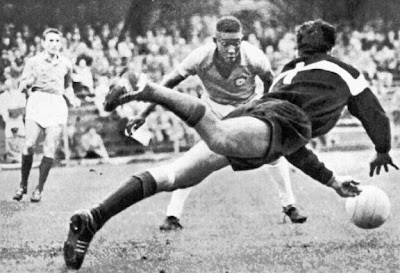 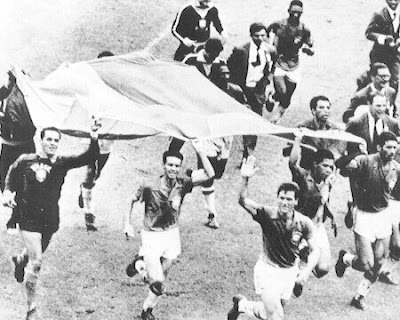 At the 1962 World Cup in Chile, Pelé missed out most of the tournament due to an injury. Brazil still managed to win the trophy. At World Cup 1966, Pele was once again was forced to permanently leave the pitch after being ferociously tackled.
After England 1966, many began to doubt the Brazilian soccer player and his superstar status. He made a triumphant return at Mexico 1970 by dazzling audiences worldwide. This was the first World Cup broadcast in color and was shown across an unprecedented number of countries. In front of over 100,000 spectators at Azteca Stadium and millions of TV viewers, Pelé scored the first goal of the 1970 World Cup final. That opened the floodgates to Brazil's crushing 4-1 victory and reclaimed Pele as the "King of Soccer". 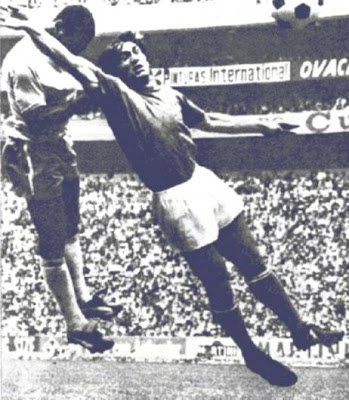 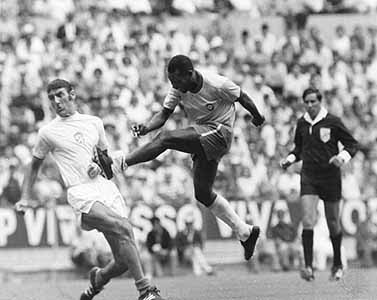 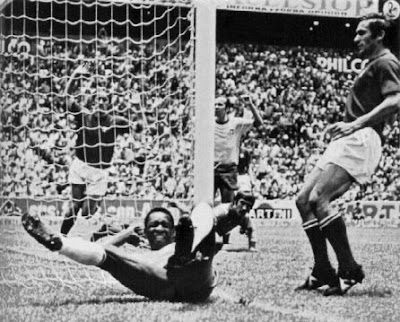 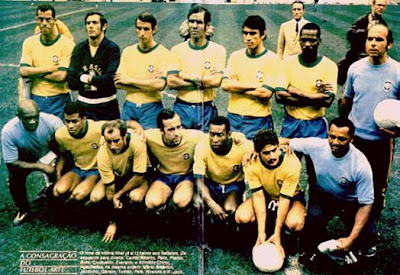 Later in the 1970's, Pelé was signed by the New York Cosmos in the North American Soccer League. He eventually retired as the only player with over 1000 goals in professional football. Pele was the first commercial superstar of non-commercial soccer (expertfootball.com). 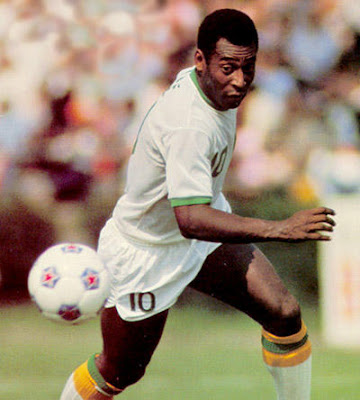 Born Edson Arantes Do Nascimento (better known as Pelé) is known as a legend and the best soccer player to ever play the game. An average-sized man, he was blessed with speed, great balance, tremendous vision, the ability to control the ball superbly, and the ability to shoot powerfully and accurately with either foot and with his head.


During his career he played in 93 full internationals for Brazil and in all first class matches scored a remarkable 1,280 goals, second only to Artur Friedenreich, another Brazilian, who holds the world record with 1,329.
He scored an average of a goal in every international game he played--the equivalent of a baseball player's hitting a home run in every World Series game over 15 years.
At the club level he shattered records in Brazil. He scored 127 goals for Santos F.C. in 1959, 110 in 1961 and 101 goals in 1965, and led the club to two World Club championships. Pelé also holds the world record for hat tricks (92) and the number of goals scored on the international level (97). His statistics are all the more amazing when compared to today's top players who can barely score more that 30 goals in a season.
In many ways, Pelé was the complete athlete. With his skill and agility, he could have played in any position on the field, but he chose on wearing the number-10 shirt as an inside-left forward. He had great balance, which enabled him to dribble effortlessly around defenders, and his heading ability was remarkable.
On Pelé's retirement, J.B. Pinheiro, Brazil's ambassador to the U.N., said, Pelé had "spent 22 years playing soccer, and in that time he has done more for goodwill and friendship than all of the ambassadors ever appointed."
He was the 1978 recipient of the International Peace Award, and in 1980 he was named athlete of the century. In 1993, Pelé was inducted into the National Soccer Hall of Fame and is the former ambassador of sports in Brazil. He has also done extensive work for children's causes through UNICEF. In 2000, Pelé was named second for the "Sportsman of the Century" award (Ozzie Gonzalez, latinosportslegends.com)
Heroes walk alone, but they become myths when they ennoble the lives and touch the hearts of all of us. For those who love soccer, Edson Arantes do Nascimento, generally known as PelŽ, is a hero (Henry Kissinger).

Pele Biography:
1940 - Edson Arantes do Nascimento, born on the 23rd of October, in Três Corações, Brazil), best known by his nickname Pelé, is a former Brazilian football (soccer) player, and is regarded by many as one of the greatest footballers of all time.
1956 - Joined the Santos Football Club and stayed with the club helping the team to nine championships in 18 years.
1958 - Brazilian Cup final was perhaps his most famous match, with Pelé scoring two goals in Brazil's 4-2 win over Sweden.
1966 - First marriage to Rosemeri, with whom he had three children.
1969 - Scored his 1000th career goal on the 19th of November, in game in Rio de Janeiro; he went on to score over 1200 goals in his professional career.
1974 - Played his last game for Santos on the 3rd of October.
1975 - Became more famous in America, when he came out of retirement to play for the New York Cosmos of the infant North American Soccer League.
1977 - Retired again after leading the Cosmos to the NASL championship.
1994 - Second marriage to Assiria on the 30th of April and the couple have two children.
1999 - Was named Athlete of the Century by the world's combined National Olympic Committees, though he never played in the Olympics himself.
2000 - Named Footballer of the Century by FIFA. The award was intended to be based upon votes in a web poll, but after it became apparent that it favoured Diego Maradona, many observers complained that the Internet nature of the poll would have meant a skewed demographic of younger fans who would have seen Maradona play, but not Pelé.
(Source: s9.com) 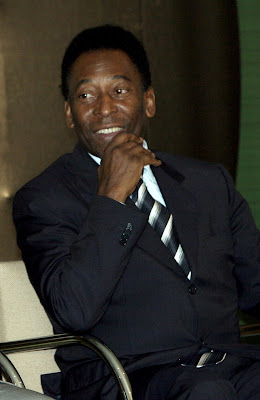