Albrecht Dürer (pronounced [ˈalbʀɛçt ˈdyʀɐ]) (May 21, 1471 – April 6, 1528) was a German painter, printmaker and theorist from Nuremberg. His still-famous works include the Apocalypse woodcuts, Knight, Death, and the Devil (1513), Saint Jerome in his Study (1514) and Melencolia I (1514), which has been the subject of extensive analysis and interpretation.
(From Wikipedia, the free encyclopedia) 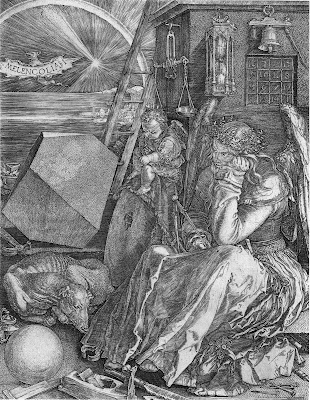 
The Knight, Death and the Devil
Copper engraving, 1513-1514
Private collection
From Wikipedia, the free encyclopedia

The self-portraits of Duerer that give us the greatest insight into his character and beliefs. The first, drawn when he was just 13, depicts the soft features of a young boy, sketched with great confidence and skill. Duerer was rightly proud of his achievement and years later he added the inscription: 'This I drew, using a mirror; it is my own likeness, in the year 1484, when I was still a child.'
Duerer's first painted self-portrait dates from 1493, when he was 22. In this work, quite possibly painted as a gift for his fiancée, his features are still youthful and he appears bashful. 'Things with me fare as ordained from above', the artist inscribed at the top of the picture.
(From artchive.com) 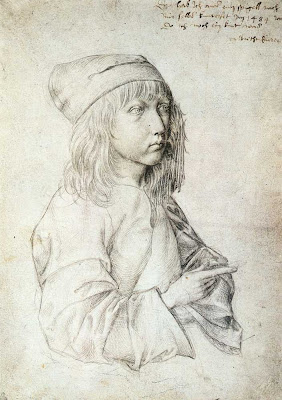 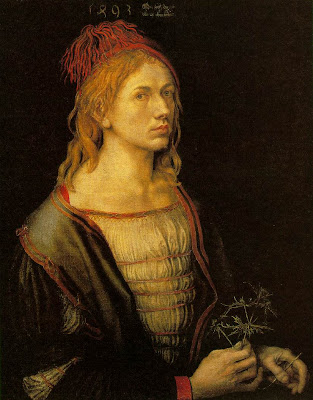 Duerer's self-portrait of 1498 reveals a transformation. Dressed in elegant clothes, he stands up much straighter and is a highly confident young man. Beside him is a window, overlooking a distant Alpine landscape. The view is a pointed reminder that the well-travelled Duerer had recently returned from Venice - one of the leading centres of the Renaissance. His face is painted with great realism - evidence of his skill. Konrad Celtis, the humanist scholar and friend of Duerer's, once repeated a story based on an anecdote of the Roman writer Pliny, saying that Duerer's faithful dog had barked and wagged its tail when it first saw a newly-completed self-portrait of its master. This, perhaps, is the picture which had once so excited his dog.
(From artchive.com) 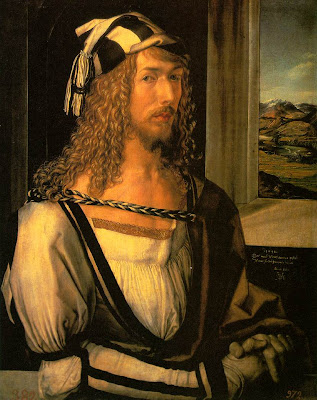 The final painted self-portrait, dated 1500, is inscribed: 'Thus I, Albrecht Duerer from Nuremburg, painted myself with indelible colours at the age of 28 years.' Although the artist has depicted himself in a Christ-like pose, this was no gesture of blasphemy. It was an acknowledgement that God had made Christ and Man in his own image. Artistic talent therefore ultimately derives from God. After this work, no other painted self-portraits survive, although he is known to have given one to the great Italian artist Raphael (1483-1520).
(From artchive.com) 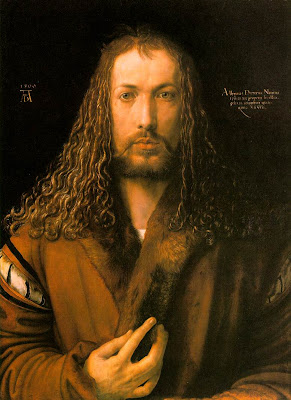 Self-Portrait at 28
1500
Oil on panel
Alte Pinakothek, Munich
From artchive.com 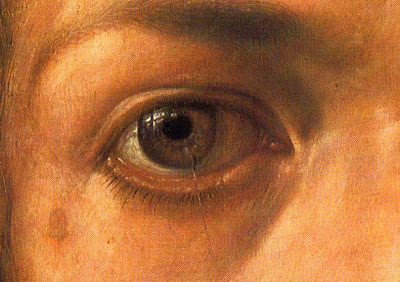 Detail of the 1500 Self-Portrait
From employees.oneonta.edu

The most celebrated of Dürer's many self-portraits is this painting, made when he was 29 and renowned throughout Europe. Facing strait forward, wearing a brown robe with a dark brown fur collar and ornamental notches on the sleeves, he is delicately grasping the fur of the collar, and he seems to be showing a tiny bit of a white (possibly Fruit-of-the-Loom) T-shirt under the coat.
- A.J. Smith, oinkst@arn.net © 19 Aug 2002, Nicolas Pioch
"Duerer drew several self-portraits. These include an unusually frank one of him in the nude. A few years later he made a small sketch of his body with his hand touching a spot near his spleen (Kunsthalle, Bremen). In what may have been a note to a doctor, or perhaps a comment on his melancholic state, he added the inscription: 'I am pointing to it with my finger: that is where it hurts.'
"Sometimes Duerer depicted himself in a painted altarpiece. On occasions he appears in his role as artist, proudly holding a board with his name and a few details about the work. At other times he gives a figure in an altarpiece his own features, such as the drummer who is mocking the afflicted Job or King Melchior in a Nativity scene. But despite this abundance of different self-portraits, the three paintings which Duerer did when he was in his twenties most affect the way we view the artist. To us he seems eternally youthful, his curly locks of hair cascading over his shoulders."
- Martin Bailey at artchive.com
The Apocalypse, properly Apocalypse with Pictures (Apocalypsis cum Figuris) is a famous series of fifteen woodcuts by Albrecht Dürer of scenes from the Book of Revelation, published in 1498, which rapidly brought him fame across Europe. The series was probably cut on pear-wood blocks and drew on theological advice, particularly from Johannes Pirckheimer, the father of Dürer's friend Willibald Pirckheimer. Work on the series started during Dürer's first trip to Italy (1494-95), and the set was published simultaneously in Latin and German at Nuremberg in 1498, with much of Europe anticipating a possible Last Judgment at 1500. The most famous print is The Four Horsemen of the Apocalypse (ca. 1497–98)[2], The lay-out of the cycle with the illustrations on the recto and the text on the verso suggests the privileging of the illustrations over the text. The series brought Dürer fame and wealth as well as some freedom from the patronage system, which, in turn, allowed him to choose his own subjects and to devote more time to engraving. In 1511 Dürer published the second edition of Apocalypse.
(From Wikipedia, the free encyclopedia) 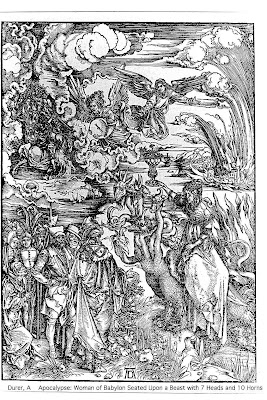 The Apocalypse
The Woman of Babylon (AKA Whore of Babylon)
Source kunstunterricht.de
From Wikipedia, the free encyclopedia

In this scene, the woman or whore of Babylon rides a seven-headed dragon, leaving a trail of destruction behind her, including (on the right) a riverside city in flames. 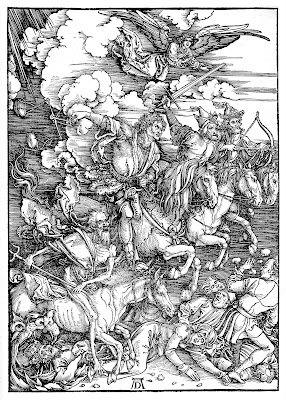 The Four Horsemen of the Apocalypse
From Wikipedia, the free encyclopedia

The third and most famous woodcut from Dürer's series of illustrations for The Apocalypse, the Four Horsemen presents a dramatically distilled version of the passage from the Book of Revelation (6:1–8): "And I saw, and behold, a white horse, and its rider had a bow; and a crown was given to him, and he went out conquering and to conquer. When he opened the second seal, I heard the second living creature say, 'Come!' And out came another horse, bright red; its rider was permitted to take peace from the earth, so that men should slay one another; and he was given a great sword. When he opened the third seal, I heard the third living creature say, 'Come!' And I saw, and behold, a black horse, and its rider had a balance in his hand; … When he opened the fourth seal, I heard the voice of the fourth living creature say, 'Come!' And I saw, and behold, a pale horse, and its rider's name was Death, and Hades followed him; and they were given great power over a fourth of the earth; to kill with sword and with famine and with pestilence and by wild beasts of the earth." Transforming what was a relatively staid and unthreatening image in earlier illustrated Bibles, Dürer injects motion and danger into this climactic moment through his subtle manipulation of the woodcut. The parallel lines across the image establish a basic middle tone against which the artist silhouettes and overlaps the powerful forms of the four horses and riders—from left to right, Death, Famine, War, and Plague (or Pestilence). Their volume and strong diagonal motion enhance the impact of the image, offering an eloquent demonstration of the masterful visual effects Dürer was able to create in this medium.
Dürer trained himself in the difficult art of using the burin to make engravings. It is possible he had begun learning this skill during his early training with his father, as it was also an essential skill of the goldsmith. The first few were relatively unambitious, but by 1496 he was able to produce the masterpiece, the Prodigal Son, which Vasari singled out for praise some decades later, noting its Germanic quality. He was soon producing some spectacular and original images, notably Nemesis (1502) and The Sea Monster (1498) with a highly detailed landscape background and beautiful animals. He made a number of Madonnas, single religious figures, and small scenes with comic peasant figures. Prints are highly portable and these works made Dürer famous throughout the main artistic centres of Europe within a very few years.
(From Wikipedia, the free encyclopedia) 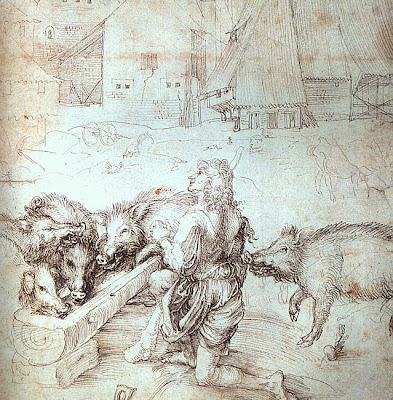 The Prodigal Son
Engraving, 1520
British Museum, London
This image is courtesy of the Art Renewal Center.

Dürer made large numbers of preparatory drawings, especially for his paintings and engravings, and many survive, most famously the Praying Hands (1508 Albertina, Vienna), a study for an apostle in the Heller altarpiece. He also continued to make images in watercolour and bodycolour (usually combined), including a number of exquisite still lifes of meadow sections or animals, including his "Hare" (1502) and the Great Piece of Turf (1503, both also Albertina).
(From Wikipedia, the free encyclopedia) 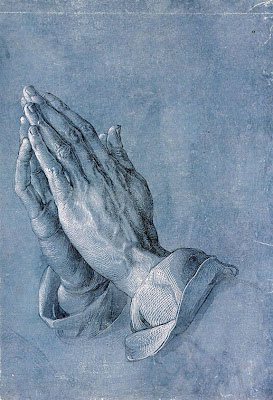 The Praying Hands
From Wikipedia, the free encyclopedia

The most often reproduced and widely known work of the German artist Albrecht Dürer is the gray and white brush drawing on blue-grounded paper, entitled the "Hands of the Apostle," generally known as "The Praying Hands"
This 1508 sketch was a preliminary study for an altarpiece commissioned by Jakob Heller (1460-1522), a wealthy merchant, member of the town council, and mayor of Frankfurt.
Dürer finished the sketch in detail, to be copied exactly in the final painting of the altarpiece. Only the central panel depicting the Assumption and Coronation of the Virgin was executed by Dürer himself. Dürer worked for 13 months on the final painting, determined to make it so sound and beautiful "that it will remain bright and fresh for five hundred years."
Unfortunately, the central panel of the altarpiece was sold a century later by the Dominicans to Duke Maximilian of Bavaria, and in 1729 was destroyed by a fire. A 1614 copy of the Heller alterpiece, done by Jobst Harrich of Nuernberg (c. 1580-1617) has survived. So too, the preliminary sketches that Dürer had prepared for the final painting have survived.
(Magnus Es Tu Domine by Josquin Desprez (c. 1440-1521), The Favorite Composer of Martin Luther at barefootsworld.net) 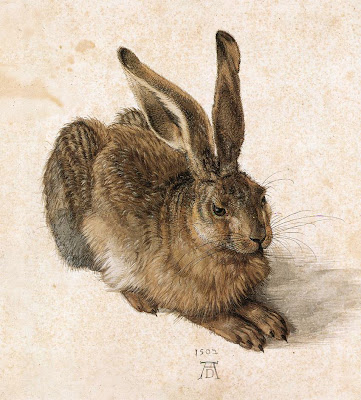 A Young Hare, 1502
Watercolor and gouache on paper
From Wikipedia, the free encyclopedia 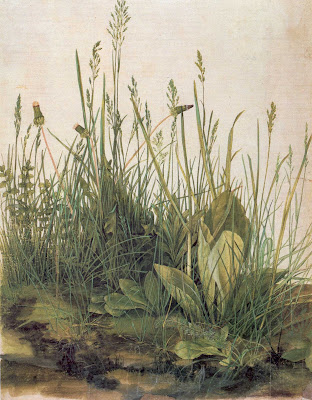 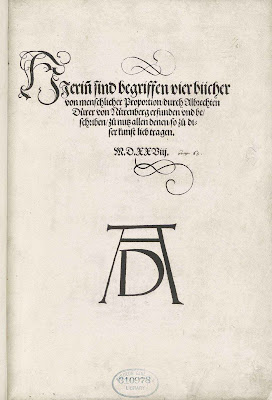 Beginning at least as early as 1512, Durer became portraitist to the rich and famous of his time, including Emperor Maximilian I, c. 1518, and Christian II of Denmark, 1521. Other sitters included Jacob Fugger and other prominent merchants, clergy and government officials. An early chalk and watercolor portrait by Durer, 1494-5, appears to copy Gentile Bellini's profile painting, now lost, of Queen Caterina Cornaro (B-31) following her surrender of her throne in Cyprus and retirement to her native Venice. Maximilian, however, had little in the way of wealth to pay for Dürer's work and he asked the councillors of Nürnberg to exempt Dürer from taxes as compensation. He then asked the councillors to pay Dürer a pension on his behalf, which certainly did not please them. From about 1515 the councillors tried to avoid paying this pension. Dürer met Maximilian personally for the first time in 1518 and, probably from one sitting in Augsburg, painted Maximilian's portrait. The following year Maximilian died and this was the final excuse for the councillors to refuse to make any further payment, saying that the new emperor Charles would have to agree to the pension.
(From Wikipedia, the free encyclopedia) 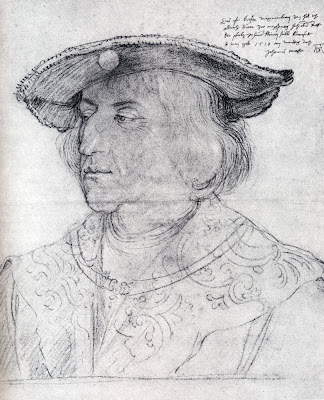 Emperor Maximilian I
Charcoal on paper, 1518
Private collection
This image is courtesy of the Art Renewal Center

Posted by BEAUTIFUL PAINTINGS at 9:31 PM