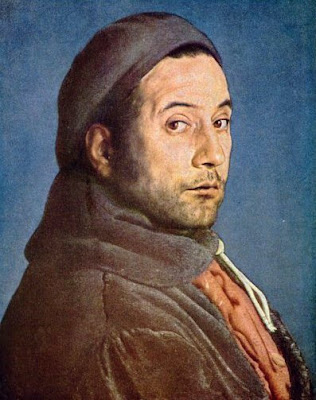 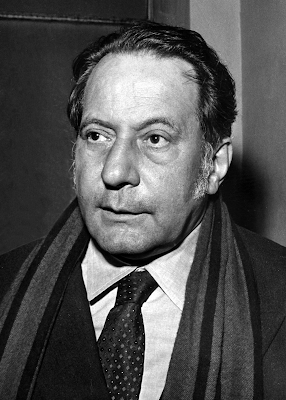 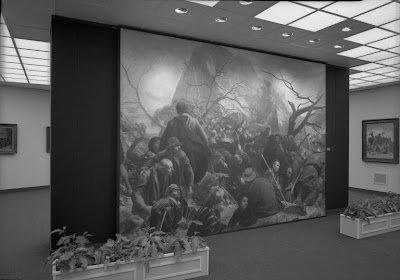 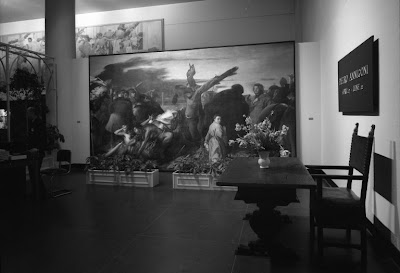 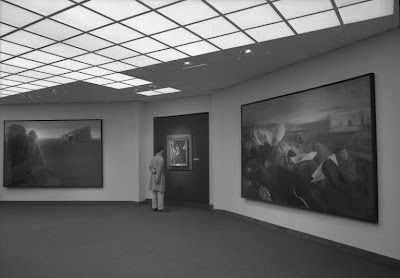 Born in Milan on June 7, 1910, Annigoni moved to Florence with his family in 1925, where he attended the Scuole Pie Fiorentine on via Cavour. He displayed considerable talent at a young age, and in 1927, he was admitted to the Academy of Fine Arts in Florence. There, he received training from some of the most acclaimed artists of the time, such as painter Felice Carena, sculptor Giuseppe Graziosi, and engraver Celestino Celestini.
In 1930, he participated in his first public exhibit in Florence, as part of a group of other painters, and in 1932 he held his first individual show, at Florence's Palazzo Ferroni. His artworks were very well received and earned him not only the prestigious Trentacoste award, but also the recognition of his contemporaries, like that of fellow painter Giorgio De Chirico, a lifelong admirer of Annigoni's work.
In these years, he traveled extensively throughout Italy and northern Europe. A solitary, alienated figure, Annigoni was very much disengaged from the dominant culture. However, during his travels he discovered he was not alone in rejecting the modernist ideals of the time, and he developed friendships with other artists who, like him, sought to defend the merits and importance of Realism.
(National Portrait Gallery, London) 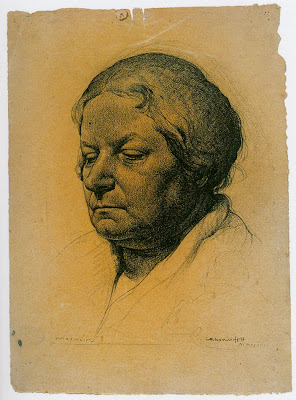 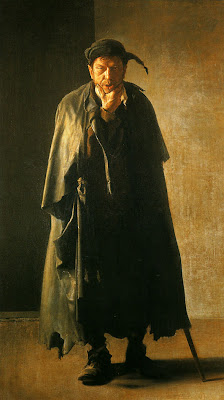 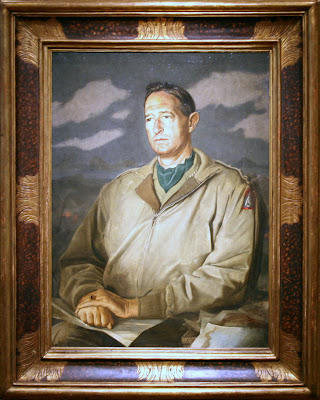 General Mark Clark (above) acquired his first distinction of World War II by leading a reconnaissance mission to Morocco in preparation for the Allied invasion of North Africa in late 1942. As Fifth Army commander and then as head of all Allied forces in Italy, he went on to play a central role in finally overcoming the stiff German resistance there; in May 1945 he had the satisfaction of accepting the surrender of German forces in Italy. Clark never let rank keep him from the front lines, and his frequent ventures into combat zones earned him the deep affection of many an enlisted man.
At one point, Clark lost his temper with Pietro Annigoni's progress on this picture and stormed out of the studio, leaving his army jacket. Although Annigoni ultimately delivered the portrait, he kept Clark's jacket for use as a painting coat.
(From cliff1066™'s photostream at flickr)
In 1947, Annigoni signed the Manifesto of Modern Realist Painters along with seven other artists, including Gregory Sciltian, Alfredo Serri and Antonio and Xavier Bueno. Annigoni often proclaimed his disdain for the superficial social and artistic trends of the twentieth century: ‘I am convinced that the works of today's avant-garde are the poisoned fruit of a spiritual decadence, with all the consequences that arise from a tragic loss of love for life'. It was in this period-the late-1940s-that Annigoni made some of his greatest and most important works.
(National Portrait Gallery, London) 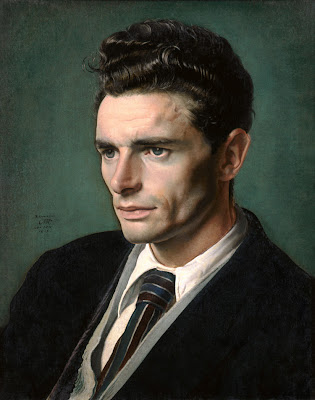 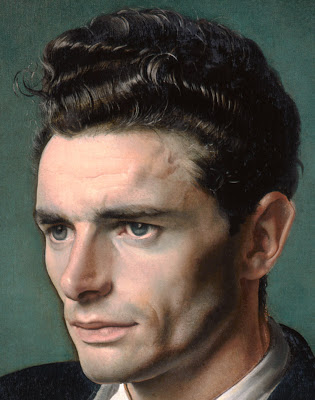 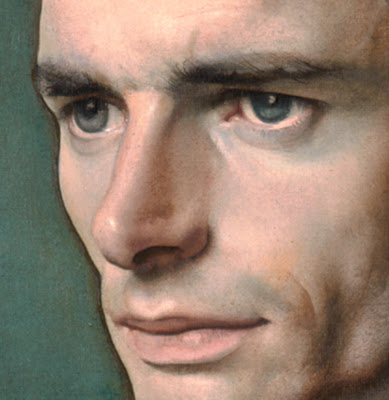 Portrait by Pietro Annigoni
From classicalrealism.com

Soon thereafter, he became noticed in Britain and participated in an exhibition held at the Royal Academy in London in 1946. His works were very well received and marked the beginning of a series of exhibitions in the U.S. and Europe that earned him widespread international acclaim.
In 1955, at the climax of his career, Annigoni painted a portrait of Queen Elisabeth II. The romantic portrayal of the young Queen made him the ‘unofficial' portraitist of the royal family and the English nobility. He went on to paint the portraits of many other important international figures, including the Shah and Empress of Iran, Princess Margaret, Italian shoemaker Salvatore Ferragamo, Florentine author Luigi Ugolini, ballet legend Dame Margot Fonteyn, American actress and poet Vanna Bonta (as a girl), and the Maharani Gayatri Devi of Jaipur.
(National Portrait Gallery, London) 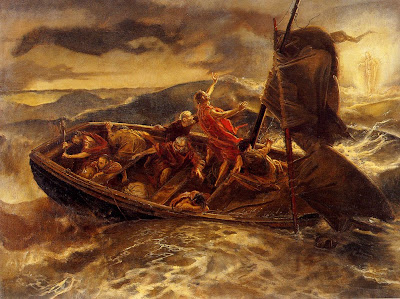 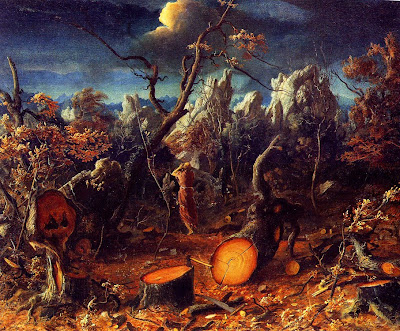 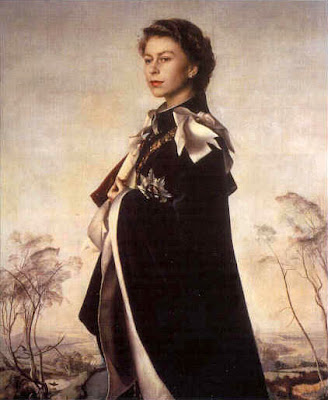 Bernard Berenson, the great, near-legendary art historian (known, in his lifetime, as the “infallible” Bernard Berenson), whose work literally defined modern scholarship in Renaissance painting, called Annigoni “. . . the greatest painter of the twentieth century.” After Annigoni painted his first portrait of Queen Elizabeth II, in 1954, he was the portrait painter of the age. Everybody who was anybody wanted to be painted by him, and he lived up to his reputation, painting masterpiece after masterpiece of interpretive portraiture. His frescoes are less well known, but they are extremely powerful; many are the equal of anything painted in the Renaissance. 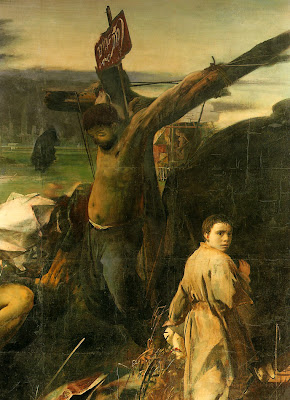 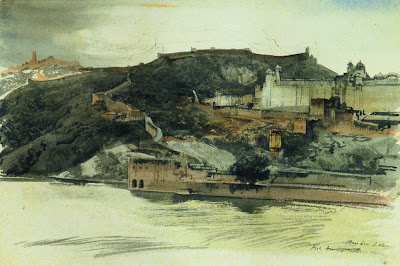 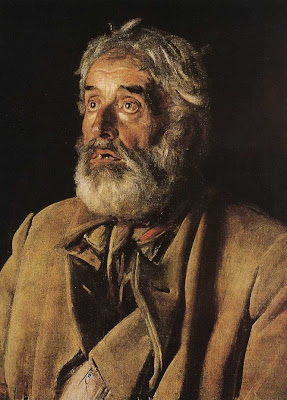 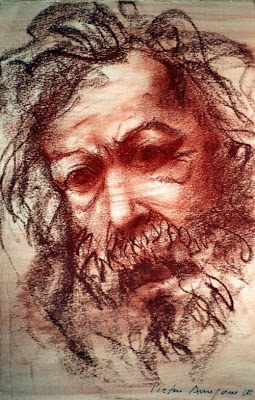 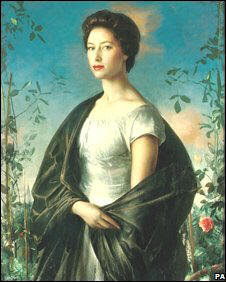 Annigoni’s portraits of the British royal family have been much in the news lately. Queen Elizabeth recently purchased a portrait of herself, painted by him in the early 1970s, and his portrait of Princess Margaret sold at auction, in June, 2006, at Christie’s, for £680,000.
(Angel Academy of Art)
The travels of Pietro Annigoni's famous portrait of Princess Margaret have come full circle. Her son, Viscount Linley, who put it up for auction three years ago, now has it hanging in the drawing room of his former council flat home in Chelsea.
For the Queen's cabinet-maker nephew, it is the final admission that when he put the painting up for sale with the rest of his mother's effects at Christie's - the auction raised a staggering £14 million - he made one of the biggest mistakes of his life.
Only at the last minute - and after public criticism that he was selling the Annigoni, reckoned by art experts to be the most important portrait ever painted of the late Princess - did he dig into his own pocket and buy it back. It cost him £680,000 on top of the £3,000 he spent having copies made.
He kept one for himself, another went to his sister, Lady Sarah Chatto, and the third was a gift for the Queen.
Until recently, Linley, who loaned the original to the National Portrait Gallery a year ago, had great sport suggesting the Portrait Gallery had been lent merely a copy, and that he had kept the real one at his home.
Says one recent visitor to Linley's apartment: 'David found it amusing to suggest the copy on his wall might be the real thing. If you are not an expert, who can tell?'
Last week, the Annigoni, painted in 1957, was returned to David Linley. The copy, meanwhile, has been delivered to the Royal Ballet School in Richmond, where Margaret was once president.
Linley's father, the Earl of Snowdon, is puzzled by the events. 'I didn't even know the painting had been loaned to the National Portrait Gallery,' he tells me.
Says ex-Army major David Bird, whose firm Family Copies created the Annigoni imitations for around £1,000 each: 'We create copies which are almost impossible to tell apart from the original. Many customers have copies on the walls of their stately homes and the original paintings are locked away in vaults.'
(From Mail Online, Associated Newspapers Ltd, 17th March 2009) 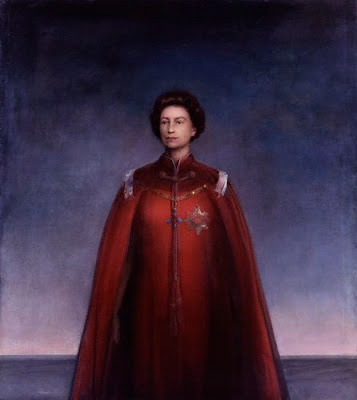 The trustees of the National Portrait Gallery commissioned the Italian artist Pietro Annigoni to paint a new portrait of the Queen in 1969. The Queen herself had expressed a preference for the artist who had painted her once before in 1954; two years after her coronation. Annigoni's second portrait, paid for by the art dealer Sir Hugh Leggatt, took 10 months and 18 sittings to complete. During this period the artist produced the sketch displayed here. This stark and monumental composition proved to be a startling contrast to Annigoni's earlier portrait of the young queen, which was glamorous and romantic. He explained his changed approach: 'I did not want to paint her as a film star; I saw her as a monarch, alone in the problems of her responsibility'. The unveiling of the portrait in 1970 generated enormous press and public interest.
(National Portrait Gallery, London) 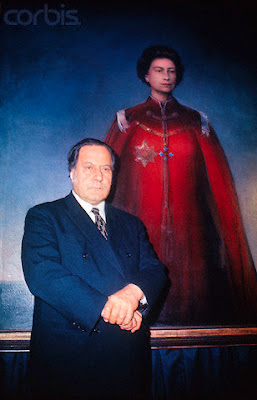 Annigoni was practically a household name in the UK, back in the day, after his portraits of Queen Elizabeth II were unveiled. He painted other members of the British Royal Family too. His two portraits of the Queen, some years apart, gathered a lot of publicity. Whereas the first was greeted warmly the second was heavily criticised at unveiling, but has, in later years, garnered praise.
(twilightstarsong.blogspot.com) 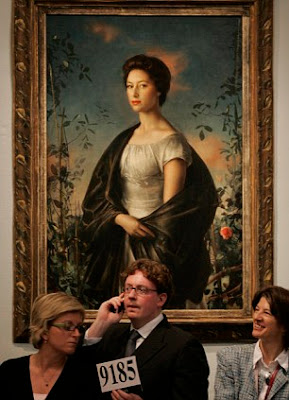 Wheeling and dealing, 2006
The auction of the Annigoni portrait of Princess Margaret
Viscount Linley later bought back the picture for £680,000

In the 1960s, Annigoni was commissioned seven covers for Time magazine, including, in 1962, a portrait of U.S. President John F. Kennedy, who was the magazine's Person of the Year, and in the same year, a portrait of Pope John XXIII. Other noted subjects were Ludwig Erhard and U.S. President Lyndon B. Johnson for Time covers in 1963 and 1968, respectively.
('Italy's greatest misunderstood artist' by Brenda Dionisi at The Florentine, issue no. 99/2009 / April 9, 2009) 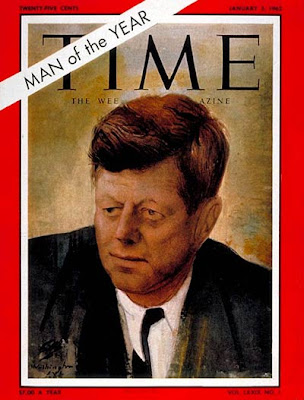 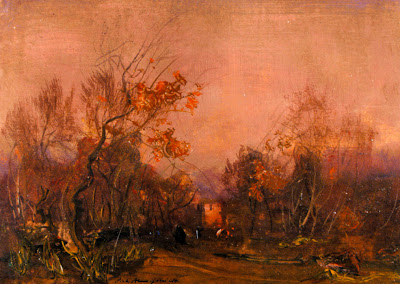 Many of Annigoni's subjects were powerful, illustrious characters - popes, royalty, aristocrats. His portraits of American presidents have graced the covers of Time magazine. In later life, grown weary of portrait painting, he retired to Italy and resumed his earlier passion - painting church frescoes. He once said "I get a little bored with human vanity. I honestly prefer these old saints of mine."
Although he gained acclaim as a painter of royalty, Annigoni chose his subjects from a cross section of humanity, painting what interested him. He was not impressed by pomp and ceremony, and maintained relationships, never losing the common touch from his early days as a struggling artist.
(twilightstarsong.blogspot.com)
Annigoni was something of a rebel - or perhaps reactionary would be a better description. He rebelled against most of his contemporaries - artists who were involved in modernism, abstract art, surrealism - all trying new ideas. Annigoni preferred to stay with tradition and realism. He challenged the modernists in essays, alienated critics - yet flourished.
"I am convinced that all the work of the avant-garde today is the poisoned fruit of one of the worst spiritual decays with all the consequences of a tragic loss of love for life" - Annigoni.
(twilightstarsong.blogspot.com)
Shaken by critics, and by a car accident that killed his best friend and left Annigoni with a mutilated left ear, he was comforted by Rossella Segreto, a Neapolitan model he had met in 1966. Annigoni's estranged first wife, Anna, by whom he had two children, died in 1969, but he and Rossella did not marry until 1976 (a year after she divorced her lawyer husband). Rossella was dubious about the match—"for young people such an age difference means nothing; for him it could have been a psychological handicap."
"She is very honest and spontaneous, even rude and irritating," says Annigoni. Until he found her, he reflects, "I had a lot of contact with women and girls without being serious about any of them." Rossella, he admits with just a touch of macho, has kept him "more faithful."
After reigning as the world's prince of portraiture, Annigoni retrenched in Florence, where he was raised (his father managed the local phone company). His studio ("a stable," chides Rossella) and elegant apartment in a Medici palace are on different sides of the Arno, and he commutes by foot across the Ponte Vecchio. Until it is warmer, he will continue to do sketches and preparatory work before returning to the scaffold and frescoes.
(By Fred Hauptfuhrer at PEOPLE magazine, April 02, 1979 Vol. 11 No. 13)
On November 14, 1975, Annigoni was conferred the Cavaliere di Gran Croce Ordine al Merito della Repubblica Italiana. In May 1988, he underwent emergency surgery for a perforated ulcer, but he never fully recovered. He died in Florence five months later, of kidney failure. He is buried in the Porte Sante cemetery at the Basilica di San Miniato al Monte, Florence.
('Italy's greatest misunderstood artist' by Brenda Dionisi at The Florentine, issue no. 99/2009 / April 9, 2009)

Posted by BEAUTIFUL PAINTINGS at 9:41 AM