"ONE OF THE FOREMOST WOMAN PAINTERS IN NEW YORK"

Jane Peterson (Illinois 1876 – 1965 Kansas) was recognized as one of the foremost women painters in the United States. Her works are housed in museums such as the Metropolitan Museum of Art, the Museum of the City of New York, the National Museum of Women in the Arts and Hirshhorn Museum in Washington D.C.
She attended the Pratt Institute and later studied at the Art Students League in New York with Frank Vincent Dumond. Following her studies, Jane Peterson was offered several teaching posts, none of which she would keep long. Instead of confining herself to the American art scene, she decided to continue her education in Paris, Venice, London and Madrid, where she studied with such notable artists as Jacques Emile Blanche, André Lhote, and Joaquin Sorolla.
Through her instruction Peterson developed vision unique in American art. She went on to influence later American artists in a teaching position at the Art Students League, beginning in 1913. Her works are a blend of Impressionist and Expressionist styles, combining an interest in light and in depiction of the spontaneous moment with the use of broad swaths of vibrant color. She is well known for her vivid, richly painted still life, and beach scenes created along the Massachusetts coast.
(From alazraki.com) 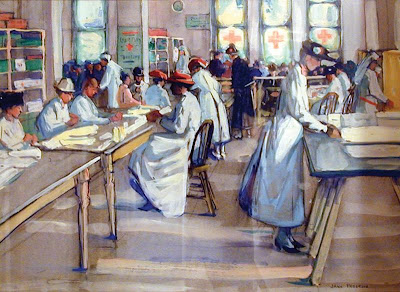 The Red Cross
From sheldonartmuseum.org 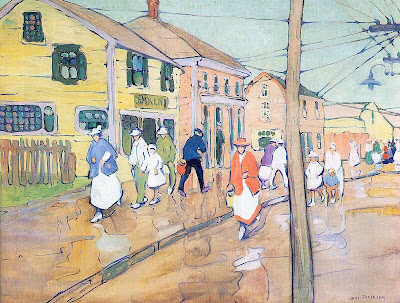 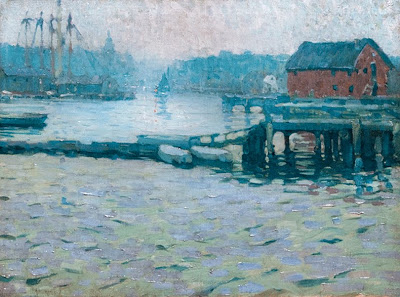 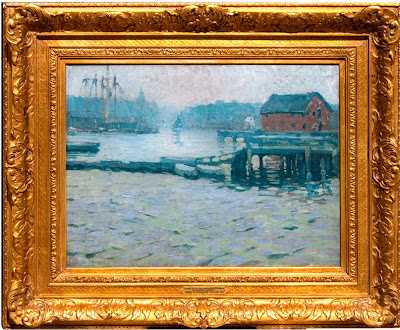 As a woman, her life was much more independent and adventurous than most of her contemporaries, and she traveled widely to paint. Jane Peterson has an individualistic style, with bold color combinations and unique designs, and her canvases intermingle Fauvist and Impressionist tendencies with academic drawing.
Internationally known writer and astronomer Percival Lowell exhibited Peterson’s work in Paris and secured her first one-woman exhibition in Boston which led to a near sell-out exhibition in New York City. By 1912, Peterson had many rich patrons…..
Traveling and painting with Sorolla, Louis Comfort Tiffany, John Singer Sargent, Childe Hassam and Maurice Prendergast, Peterson was in an influential art entourage and made it evident she could paint with the best of the male painters.
(stateoftheartgalleryandsculpturegarden.com)

Figures Along a Venetian Canal, Summer
Oil on paper mounted to canvas, circa 1903-1909
From piercegalleries.com

Figures Along a Venetian Canal, Summer (above) was painted circa 1903-1909 and shows dramatically how influenced Peterson was by the bold exciting colors that were being experimented with by members of the Paris Fauvist movement. In this oil painting Peterson is a fine draftsman as well as colorist. With broad, sweeping strokes of pure color she juxtaposes light against dark, while at the same time with the use of various tones and hues of white and off-white pigments a viewer's eyes scans the entire picture from the two bonneted female figures at the right of the picture, to the figures along a canal bridge to the stucco building in the distance. The day is bright and filled with sunshine but tall buildings that line the canal give shade and shadow, allowing the picture to develop depth and charm.
(piercegalleries.com)

A Landing along Grand Canal, Venice
Oil on board, ca. 1910
San Antonio Museum of Art
gift of Mrs. Wylie F. Creel in memory of Dr. Wylie F. Creel
From samuseum.org 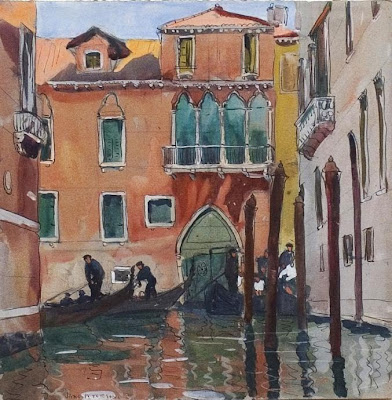 Peterson was delighted by the various artist colonies and new artistic freedoms Europe provided. She decided to prolong what was only to be a summer vacation into a permanent stay in Paris. She admired the emerging modern approach to color, form and imagery, but did not adopt these techniques, staying faithful to her own individual style.
Venice (above) is a charming example from Peterson’s time there, depicting a number of gondoliers navigating the canals. This scene conveys her skill in rendering the complexities of light, shadow and reflection, and she creates a harmonious composition by eliminating unessential detail, keeping outlines loose and using a rich, colorful palette.
(owengallery.com)

During World War I, Peterson painted war-oriented subjects that were exhibited and sold (or donated) to promote Liberty Loans and the American Red Cross efforts. In 1924, Peterson’s "Toilette" received rave reviews at the New York Society of Painters and a one-woman show on Fifth Avenue sold-out. By this time, she had won numerous awards, was a Fellow at the National Academy of Design and a member of many art clubs including the American Watercolor Society, Audubon Artists, Pen & Brush Club, and the National Association of Women Artists.
In 1925, "The New York Times" characterized Peterson as “one of the foremost women painters in New York.” Known for her colorful, post-impressionistic paintings of Gloucester streets and harbor on Cape Ann; palm trees along the Florida coast; street scenes in Paris, Istanbul and New York City; boating views in Venice, Italy and elsewhere, Peterson also painted floral subjects and dynamic genre-like-portraits.
(stateoftheartgalleryandsculpturegarden.com) 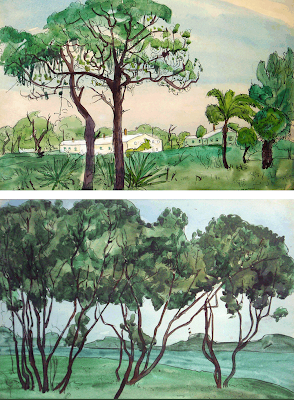 Landscape near Palm Beach (pair)
Watercolor & gouache on paper mounted on board
From alazraki.com

Landscape near Palm Beach (above) is an excellent example of Peterson’s landscapes in the vicinity of Palm beach, where she lived and worked. The wonderful color and light mood of the pair recalls the influence of her teacher Sorolla, but Peterson’s tendency to simplified, almost abstracted forms and flat planes of color gave her a unique interpretation of such scenes and put her in step with modern trends in America.
(alazraki.com) 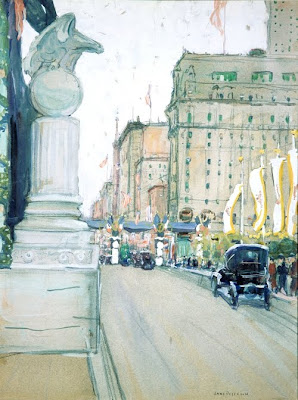 After marrying in 1925, Peterson devoted most of her time to painting floral subjects. The artist painted in her beautiful gardens at her estate in Ipswich, New York. In 1946, she wrote a how-to book on painting flowers---“Flower Painting”.
(artandinfluence.blogspot.com)
One of the factors she considered part of her success was her chosen status as a single woman. For nearly three decades she had been able to focus solely on her art. Finally, at the age of 49, Peterson married a wealthy widower named M. Bernard Philipp. For the next five years, until his death in 1929, the couple spent winters in New York City and summers at his Rocky Hill estate in Ipswich. Unable to travel and paint in exotic places as was her habit, Peterson began to paint flowers instead. Every summer for the next quarter of a century the artist planted, cultivated, and then painted zinnias, peonies, and petunias at Rocky Hill. By the time she died in 1965, Jane Peterson had come to be known more for her Ipswich flower paintings than for her views of Paris, Constantinople, Turkey or any of the other exotic locales she had visited in her younger days.
(From escapesnorth.com) 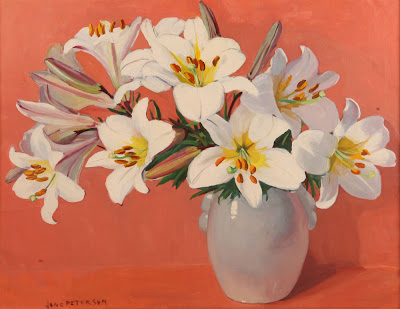 Lilies
Oil on canvas
From mcdougallfinearts.com 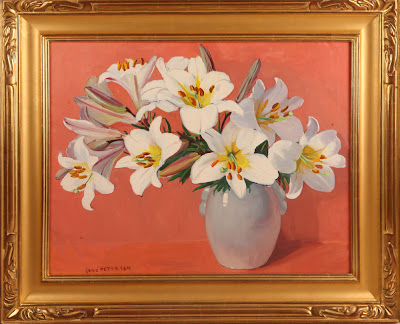 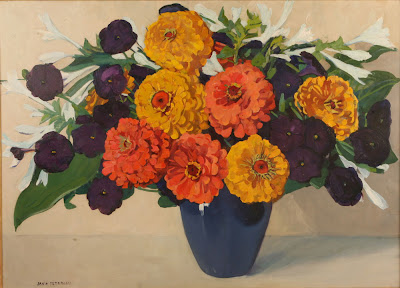 Zinnias and Pansies
Oil on canvas
From mcdougallfinearts.com 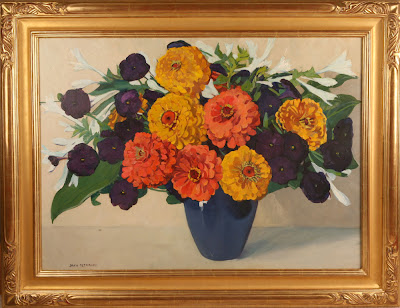 Zinnias and Pansies (framed)
Oil on canvas
From mcdougallfinearts.com 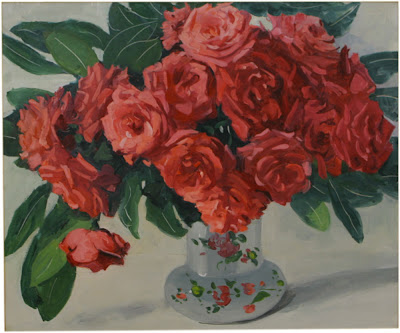 Still Life of Roses
Oil on canvas
From mcdougallfinearts.com 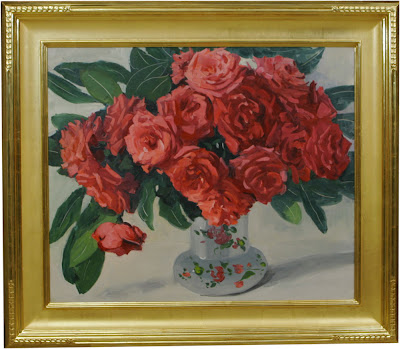 Still Life of Roses (framed)
Oil on canvas
From mcdougallfinearts.com 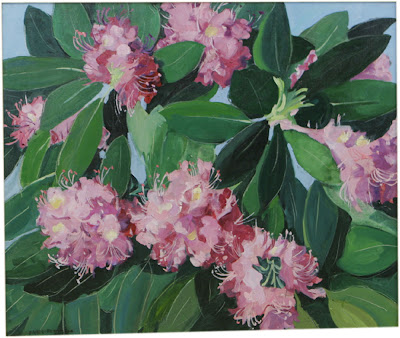 Rhododendrens
Oil on canvas
From mcdougallfinearts.com 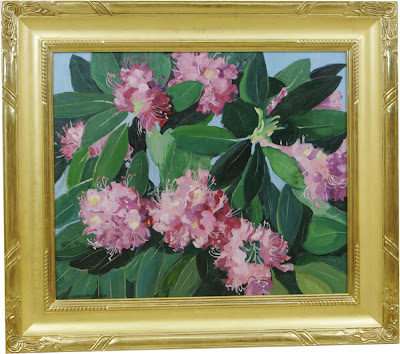 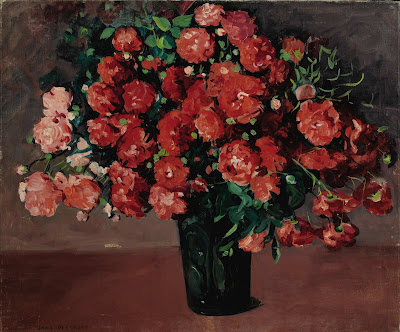 Because of her unique palette, energetic brushwork and appealing subjects, Jane Peterson is one of the most sought after painters in the art world. She is admired and praised for developing an individualistic style, intermingling bold color combinations and for creatively constructing unique designs in masterfully rendered avenues of pigment. Canvases with aspects of Fauvist and Impressionist tendencies rank among her finest work.
(piercegalleries.com)
In her lifetime, Jane Peterson had over 80 one person shows. She was a Fellow at the prestigious National Academy of Design and a member of many art organizations, including The American Watercolor Society, The Allied Artists of America, The National Association of Women Artists and the Pen and Brush Club.
Jane Peterson died at an old age in 1965.
(artandinfluence.blogspot.com)

Posted by BEAUTIFUL PAINTINGS at 10:33 PM