Ste. Genevieve, Missouri
a mural in the Missouri State Capitol
Source Transferred from wikipedia made by User:A. Balet
Author Americasroof at wikipedia
From Wikipedia

The Taos Society of Artists was an organization of visual artists founded in Taos, New Mexico in 1915 and disbanded in 1927. The Society was essentially a commercial cooperative, as opposed to a stylistic collective. However its foundation was important in the development of the tiny Taos art colony into an international art center. The six founding members included:
• Bert Geer Phillips
• Ernest L. Blumenschein
• Joseph Henry Sharp
• Oscar E. Berninghaus
• E. Irving Couse, the Society's first president
• W. Herbert Dunton

Later members included Julius Rolshoven, Walter Ufer, William Victor Higgins, B.J.O. Nordfeldt, and others. The structure of the Society was modeled on the Society of Western Artists, and an artist must have worked in Taos for three consecutive years, which promoted long-term investment in the area. Contemporary evidence, notably in the letters of Marsden Hartley who arrived in 1918, indicate some tension between the already-established Society, and the relative newcomer modernists in the social orbit of Mabel Dodge Luhan.
(Wikipedia) 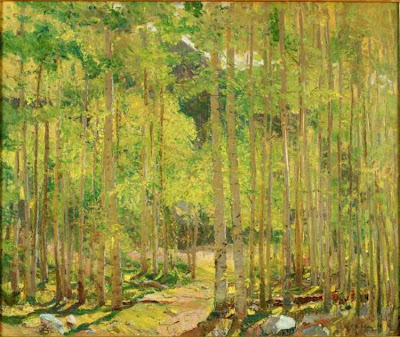 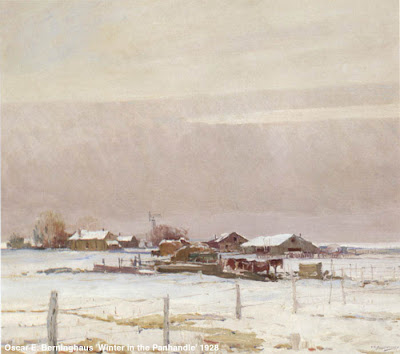 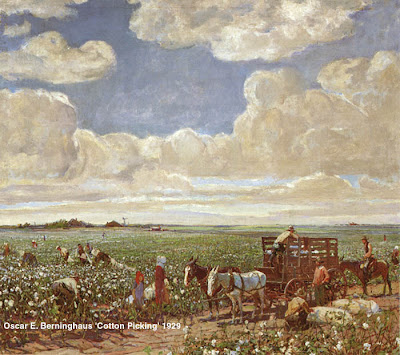 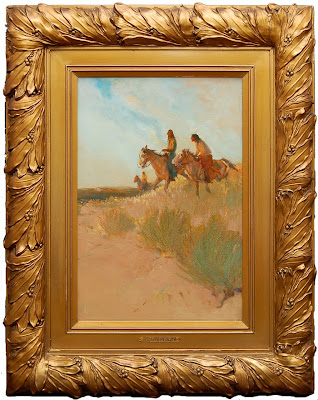 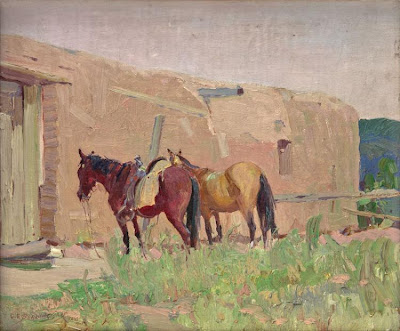 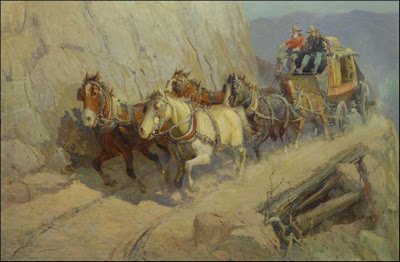 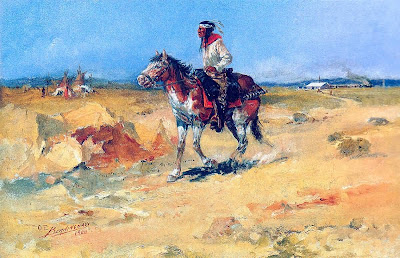 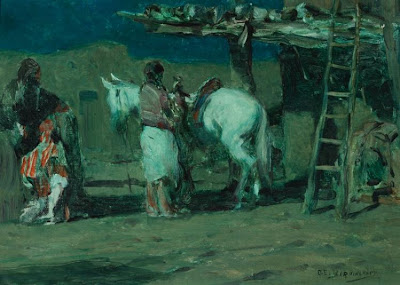 The Corner in the Pueblo
Jackson Hole Art Auction
From AskART 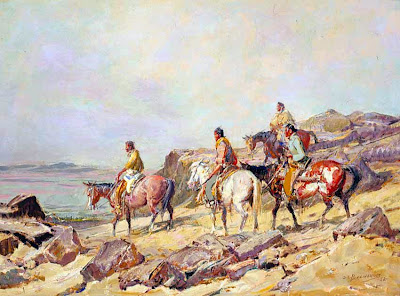 Indians In Rocky Landscape
From American Gallery's photostream at flickr 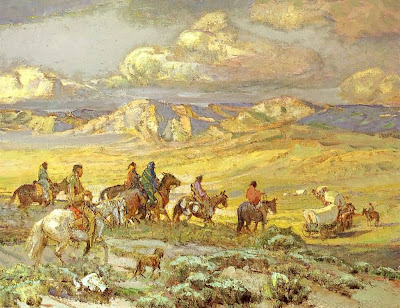 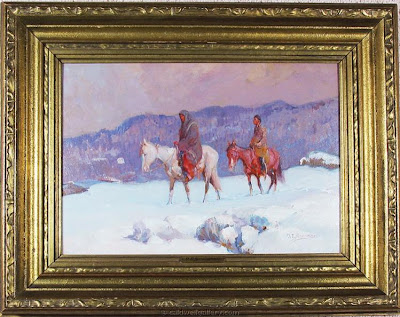 The light and landscape of the region captivated Berninghaus and, even when wintering in St. Louis, the sights and scenes of Taos were his primary subject matter. This ability to paint what he could not see in front of him, as he did when painting Taos natives from his studio, was both an intellectual conceit and a hard-earned talent picked up on sketching trips. Berninghaus believed that art was an emotional exercise, not a representational one. "The painter must first see his picture as paint-as color-as form-and not as a landscape or a figure. He must see with his inner eye, then paint with feeling, not with seeing." To this effect, Berninghaus took liberties with color and form in his pieces, omitting details when he desired and painting impressionist riffs on the landscape in the background at times.
Along with Berninghaus, Phillips, Blumenschein, Buck Dunton, E.I. Couse and J.H. Sharp all joined this group, whose aim was to market their artwork in traveling exhibitions, as there were no galleries in Taos to sell their work at the time. The traveling shows were a great success, and galleries in many American cities drew significant crowds to the work of these artists, whose combination of technical, academic skill and a sympathetic approach to the exotic people and landscapes of New Mexico were of great interest to the urban populace of the day.
It was also a financial boon to many of the Taos artists, who were able to sell many paintings to railroads, travel companies and large corporations in order to fund their fine art endeavors. Berninghaus was lucky enough to have a major account with Anheuser-Busch, whose steady patronage was a great help to him economically, allowing him to rent space in two different cities and, eventually, to move out of St. Louis entirely.
His relationship with the Pueblo Indians in the area was also a crucial element of his success. He had access to the Pueblo above and beyond almost every other artist in the area. He had a number of true friends within the Taos Indian community and was actually allowed within the kivas of the Pueblo, an honor usually not extended to white men. In exchange for access, the Taos Indians had a degree of control over Berninghaus' compositions, allowing him to paint the dances and rituals they felt it was appropriate to reproduce.
Berninghaus lived year-round in Taos for twenty-seven years, painting hundreds of pictures of the mountains, forests and people of the area. By the end of his career, he was able to paint without visual aids, creating portraits of people long since aged or dead from memory.
(oeberninghaus.net) 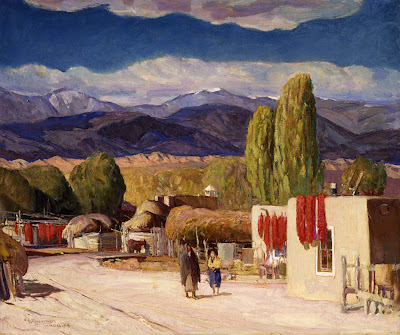 Berninghaus once stated that “the painter must first see his picture as paint—as color—as form. He must see with an inner eye, then paint with feeling, not with seeing.” In Red Pepper Time (above) the mountains rise dramatically behind the town of Lavacita, New Mexico, and the animated texture of the desert plateau becomes a tapestry of dark paint. The red of the newly harvested peppers, set against the pueblo's dull buff wall, rivets our attention. While such vividness is certainly an accurate evocation of the pepper's strong flavor, the painting's colorful contrasts also infuse an everyday scene with strong emotional content.
(oeberninghaus.net) 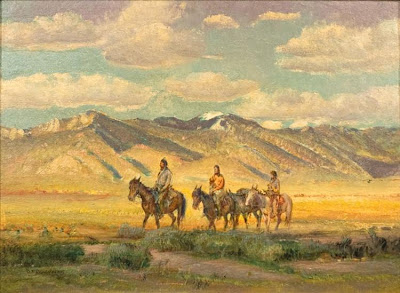 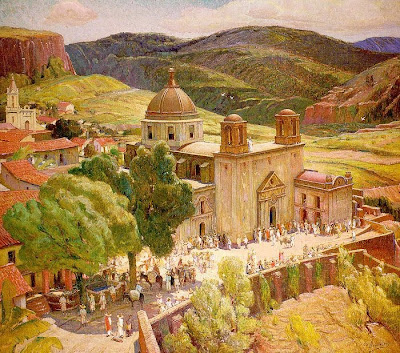 The painting (above) was done by the American painter, Oscar Edmund Berninghaus in 1949 about the same time the following photos (below) were taken: 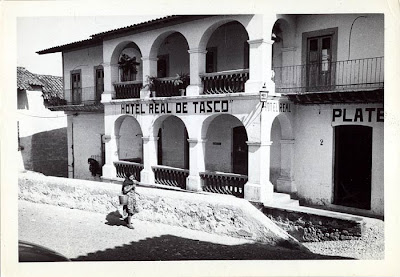 We are at the Spratling retail store, on the only straight and level street in town, Oh yes, the jail was just over that wall, now it's the 'Passaje' of the silver merchants. 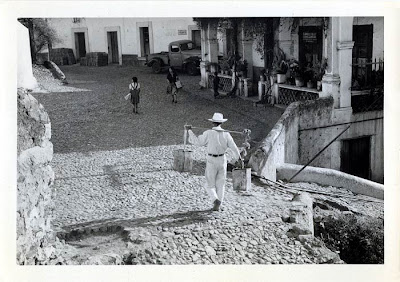 In front of the old Palacio Municipal lies what was once called 'Plazuela de las Carnicerias'. To the right is the stairway Callejon Ex-Rastro (slaughterhouse) which leads down to plazuela Las Estacas. 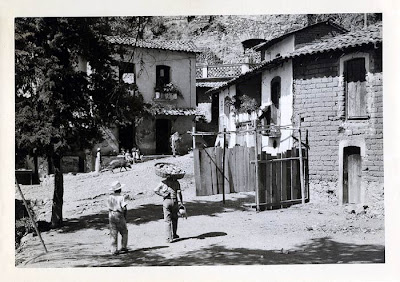 La Discordia shrine is just behind us, that's Calle Escobar leading off to the right. 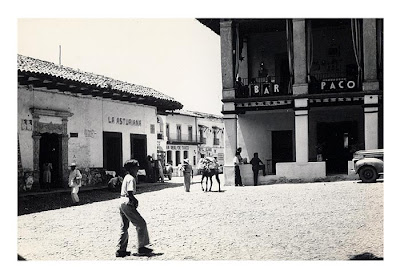 Paco's Bar has been a fixture of the zocalco for many years. Looks really quiet back then. Here it is during a recent busy Easter Sunday afternoon. 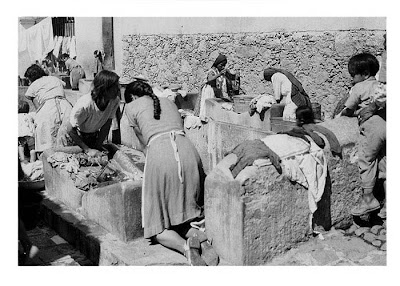 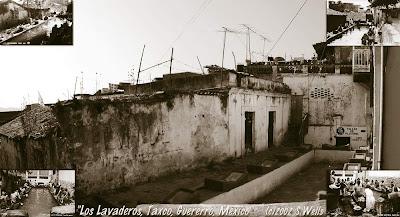 The communal laundry view may be the most photographed Taxco postcard, next to the Santa Prisca 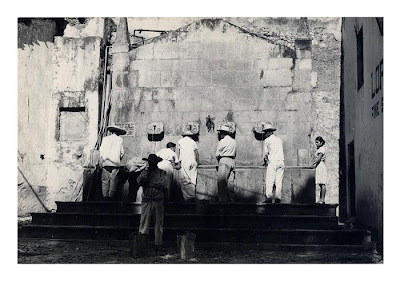 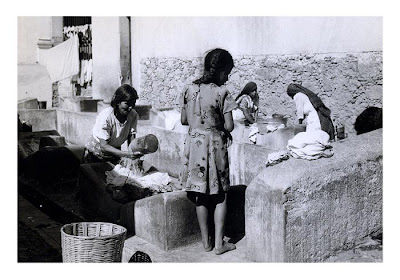 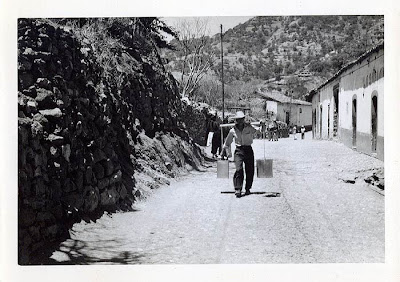 Water has always been a problem and remains so today, you will see drinking water being carried all over town, in pick-up trucks today. 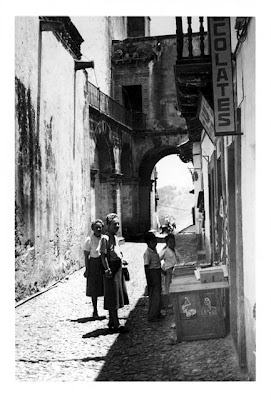 Looking east on Callejon de los Arcos alongside the Santa Prisca. We are about to enter the old newspaper stand that is still there today! 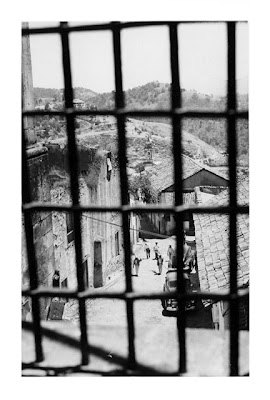 Looking east through a window towards the Veracruz, off in the distance is the Capilla at the Hotel Mision property 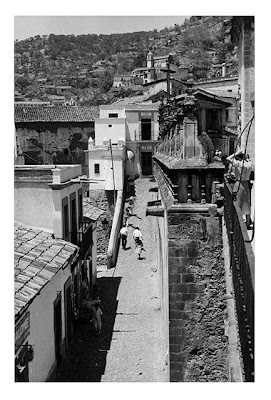 Callejon de los Arcos and the Passaje del Toril, at left, with wide, long stairs to accommodate a donkey's decent. We are standing above Los Arcos. Ojeda is on the hillside.
(All Photographs and Texts, above, by anonymous ©2002 Pernel S. Thyseldew at DigThatCrazyFarOutPlanetMan)

When Oscar Berninghaus succumbed to the effects of a crippling heart attack on April 27, 1952, a certain period of Southwestern Art effectively ended with him. One of the leading figures of the Taos Society of Artists and an artist whose success was hard-won, his passing represented the beginning of the end for the original painters of Taos and New Mexico. At 77, he was one of the elder statesmen of the New Mexico art community, whose body of work, in the words of artist Rebecca James, was "a magnificent document of the Southwest, painted as no one else has put down in this country. It is suffused with tenderness, is straight and tough as a pine tree, strong as a verb."
(oeberninghaus.net)

Posted by BEAUTIFUL PAINTINGS at 9:02 AM