The Amsterdam artist, Pieter Jacobsz Codde (Dutch, 1599-1678), was mainly known as a portrait painter, although his indoor scenes were also popular. His family portraits exude the same carefree atmosphere as his brothel scenes.
(rijksmuseum.nl)
Codde was a technically skilled painter. He is said to have studied with Frans Hals, but it is more likely that his training was with a portrait painter, inn-keeper, actor and art-dealer Barent van Someren (1572–1632) or possibly with Cornelis van der Voort (1576–1624).
In 1623 he married the 18-year-old Marritje Arents. In the summer of 1625, on a party, organized by Van Someren on his estate, Codde got into a fight with his friend, the artist Cornelis Duyster. It ended with bloodshed as the two hit each other in the face with jars. Already in 1631 Codde lived the Sint Antoniesbreestraat, then a fashionable street with many painters. In 1636 the couple divorced after he was accused of raping the maid; because nothing could be proved he was only locked up for one night. His wife went living with Pieter Potter, their neighbor and the father of the painter Paulus Potter.
(en.wikipedia.org) 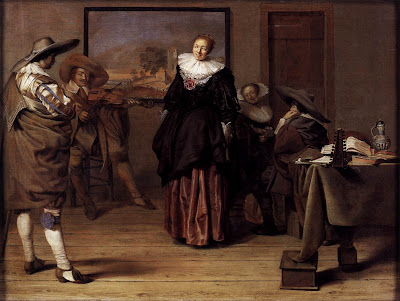 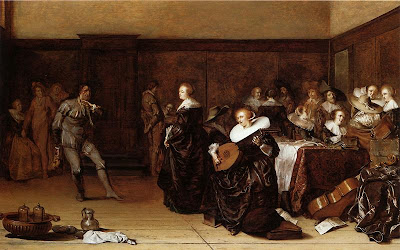 Most of Pieter Codde best remembered works were executed in Amsterdam and were small-scale paintings. They were distinct in their silvery-gray tonalities, and many were musically themed, such as his first known genre work, Dancing Lesson (Louvre, Paris) from 1627, Musical Company of 1639, The Lute Player (Philadelphia Museum of Art) and, Concert, a piece now in the Uffizi Gallery. (Kren and Marx, Web Gallery of Art) The other piece by Codde in the Uffizi Gallery is a genre work, Conversation. Codde also painted historical religious works, such as his, Adoration of the Shepherds.
(virtualuffizi.com)
It is possible that Codde studied with a portrait painter, perhaps Barent van Someren or Cornelis van der Voort (1576–1624), since most of his earliest works, from the period 1623–7, seem to be portraits. He was particularly productive in the 1620s and 1630s, painting mainly interior genre scenes. After the mid-1640s only portraits and a few history paintings are known. It is not known how long he remained active as a painter.
(artnet.com) 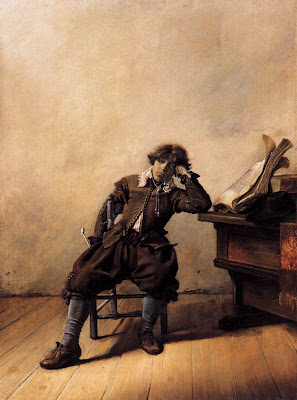 A Young Student at His Desk: Melancholy
Source wga.hu
From en.wikipedia.org 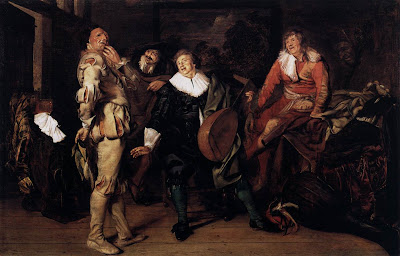 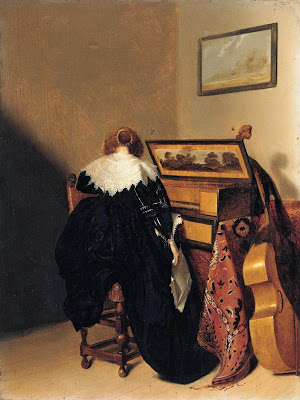 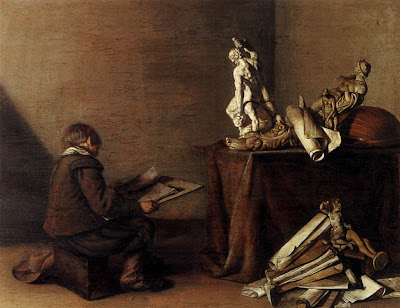 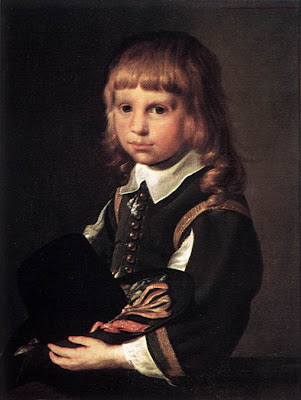 Portrait of a Child
Oil on canvas
Staatsgalerie, Schleissheim
From Web Gallery of Art at wga.hu 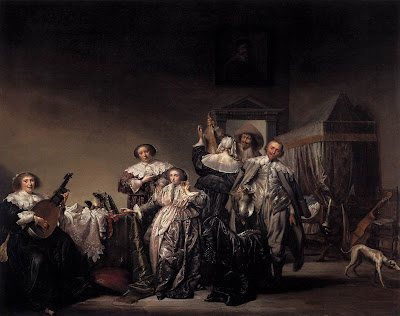 Return of the Hunters
Oil on panel, 1633
Rijksmuseum, Amsterdam
From Web Gallery of Art at wga.hu

Gathered in a tall, spacious room is a festively-attired company. A few women are sitting at a table; two men have just entered. The one behind is greeted by one of the women; he proudly holds up a hare. His companion presents two partridges, also shot. This work by Pieter Codde is known as the 'Return of the Hunters'. The men, however, are not dressed as hunters and so the word 'hunting' is clearly intended metaphorically and means the 'pursuit of love'. The erotic implications - of the large bed in the corner, for instance, and the hunters' catch - would immediately have been plain to a seventeenth-century viewer. At the time 'hunting the hare' and 'fowling' were metaphors for making love. The partridge furthermore was regarded as 'the most lascivious of all birds'.
In the 17th century partridges had a bad reputation when it came to the erotic. In his book 'Iconologia of uytbeelding des verstands' - the iconography or illustration of reason - (1644) Cesare Ripa says that this bird is supreme in displaying 'unbridled lust and limitless lewdness'. Ripa claimed that 'cock partridges were so frenzied in treading their hens and aroused to such heights of lechery, that they often broke the eggs their hens were laying, since when they were laying them it was impossible to go on mating with them.' As for the hens it was also necessary to repeat the process in order to get more eggs. of all birds'.
(rijksmuseum.nl)

A well-to-do citizen (above), fashionably dressed with a wide, lace collar, with one arm cast nonchalantly over the back of a wooden chair. In the other he holds a walking stick. The subject is probably Nicolaes Hasselaer (1593-1635). Hasselaer, who owned a brewery in Amsterdam, was a member of the city's upper class. He was a governor, or regent of the Civic Orphanage, a man of status. Hasselaer is known to history as the militia major who quelled the riot of sailors demanding a share in the booty from the Silver Fleet, the Spanish treasure fleet of 1628. The Dutch word 'regent' (from the Latin 'regere', to govern) refers to governors at every level, from the local orphanage to the civic or provincial administration of the Civic Orphanage, a man of status.
(rijksmuseum.nl)

From her clothes it is clear that this woman (above) is a woman of considerable status. She is well-to-do and fashionable: her dress is richly ornamented, around her neck is a Millstone ruffs. The millstone ruff is a round collar made of pleated white linen. It was fashionable in Holland from the late 16th century to about 1625. They began small, but became increasing broad until finally resembling millstones. Manufacturing such large ruffs was a complicated and time-consuming task for the specialists who made them - mostly Flemish or Dutch women. A ruff like this required a great deal of material, sometimes as much as 15 meters. Usually cambric was used, a fine linen often decorated with bobbin lace. After washing and starching, it was gathered or pleated and set on a collar and then ironed into circular shapes with 'pipe' irons. These costly collars or ruffs were worn by the well-to-do, both men and women. And a cap covers her dark hair. The painting is a pendant or companion piece, of a portrait of a man, probably the Amsterdammer Nicolaes Hasselaer. Hasselaer was married to Sara Wolphaerts van Diemen (1594-1667). Presumably, therefore, she is the woman in the picture. The word pendant comes from the Latin 'pendere', meaning to hang. A pendant is a counterpart: a painting intended to hang together with its pair. They are often of the same format and with identical frames. Most pairs of paintings feature married couples. Sometimes, indeed, the background continues from one painting to the next.
(rijksmuseum.nl)
In 1636 Codde was commissioned by an Amsterdam militia company to finish a work which his famous colleague Frans Hals did not want to complete. In the 'Meagre Company', as the militia piece is called, the styles of both painters can be recognized. Pieter Codde has tried to blend his style with that of Hals; however his own style remains recognizably smoother.
(rijksmuseum.nl)

'Just to see that painting would make the journey to Amsterdam worthwhile' wrote Vincent van Gogh in 1885, after having seen this work in the Rijksmuseum. He particularly liked the 'orange banner in the left corner,' he had 'seldom seen a more divinely beautiful figure'. The painting that caused such a sensation was the group portrait of the crossbowmen's militia under Captain Reinier Reael, painted by Frans Hals and Pieter Codde in 1637. The painting has been known for centuries as the Meagre Company. The portrait of the company of Captain Reinier Reael is usually known as the Meagre Company. The nickname was given in 1670 by Jan van Dijk who wrote about this militia unit: '. That since all of them are wisened and thin, they should properly be called the Meagre Company because the figures portrayed all appear remarkably thin.
(rijksmuseum.nl)
Art historian and restorer Jan van Dijk found this militia portrait by Frans Hals and Pieter Codde so 'barren and frail', in 1758, 'that they might rightfully be called the Meagre Company'. Since then this militia portrait has been known by that name instead of the exact title: Officers of the Company of the Amsterdam Crossbow Civic Guard under Captain Reynier Reael and Lieutenant Cornelis Michielsz Blaeuw.
Frans Hals was commissioned to paint the portrait of Captain Reynier Reael and Lieutenant Cornelis Michielsz Blaeuw of the Amsterdam crossbowmen's guild together with their militiamen. He was to paint the piece in Amsterdam, where the members of the company lived. For Hals, who lived in Haarlem, this involved regular trips to the capital. In fact he was rarely to make the journey at all. In 1636, three years after receiving the commission, he had still only completed part of the painting. Eventually the militiamen took him to the task. In reply he responded, as the preserved documents state, that it had been agreed he would begin the portraits in Amsterdam and complete them in Haarlem. The representatives of the guild, however, claimed that they had even offered six guilders extra per portrait on the condition that Hals travels to Amsterdam to paint the men's bodies as well as their faces. Hals was to receive 66 guilders per person upon completion of the painting, a total of 1,056 guilders for the whole work. Despite the high rate, Hals could no longer be persuaded to make the journey to Amsterdam. He suggested that the unfinished work be brought to Haarlem, where he would complete the sitters' attire. Then he proposed to finish painting the faces, assuming that the militiamen did not object to travelling to Haarlem. By now the dispute had become so heated that the guild decided to ask another artist to complete the painting. The task fell to Pieter Codde, a strange choice since Codde's paintings were usually small and meticulous. Codde lived in Amsterdam, though, and may even have been a member of the militia company.
Frans Hals painted the general outlines of the composition and completed some of the faces and hands, but only the ensign on the left, with the shiny satin jacket, is entirely by his hand. Pieter Codde painted the costumes and the portraits which Hals failed to complete.
(Web Gallery of Art at wga.hu)
The present work conforms to a type of group portrait known as the “militia company”, which is widely found in Dutch art in the sixteenth and seventeenth centuries. Such companies, made up of volunteer members of the urban elite, existed in Holland from the late sixteenth century, assembling when their services were required. They commissioned group portraits of this type, the most famous of which is Rembrandt’s Night Watch (1642), to hang in their headquarters. During the period that the present canvas was painted these companies were still occasionally involved in military conflicts and played a role in the struggle for independence from the Spanish Monarchy.
Within the context of the Museo del Prado, it is worth noting the existence of an interesting parallel in Spain. In the same way that Hals and Codde’s painting can be considered a vehicle for visual propaganda that emphasised the willingness of those depicted to defend the Dutch Republic, a number of works executed at the court in Madrid during this period exalt the virtues of the Spanish forces. One such work is Velázquez’s Surrender of Breda, painted in 1634-35, at exactly the same time as the present work, which celebrates the capture of the Dutch city of Breda by the troops of the Spanish king. This work by Frans Hals and Pieter Codde is an expression of pride by one side in the conflict, while Velázquez’s canvas conveys comparable sentiments on the part of the other.
(museodelprado.es)
Pieter Codde was buried on 12 October 1678 in Amsterdam.

Posted by BEAUTIFUL PAINTINGS at 8:35 AM