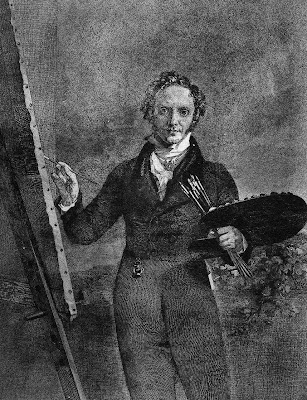 George Dawe at work
Author Райт (гравюра на стали), автор рисунка неизвестен
Source dlib.rsl.ru
From WIKIPEDIA
George Dawe (6 February 1781, St James's, Westminster – 15 October 1829, Kentish Town) was an English portraitist who painted 329 portraits of Russian generals active during Napoleon's invasion of Russia for the Military Gallery of the Winter Palace. He relocated to Saint Petersburg in 1819, where he won acclaim for his work from the artistic establishment and complimentary verses by Pushkin.
He was the son of Philip Dawe, a successful mezzotint engraver who also produced political cartoons relating to the events of the Boston Tea Party. One of his brothers was Henry Edward Dawe, also a portraitist.
(WIKIPEDIA)
Dawe was known in Europe as a fashionable portraitist and master of engravings. He also produced canvases on historical and mythological themes as well as genre paintings in the spirit of sentimental Romanticism. Dawe painted portraits of English generals who distinguished themselves in the Battle of Waterloo. In 1818 the artist was present in Aachen at the Congress of the heads of the states that entered the Holy Alliance. There he was introduced to Alexander I and the Russian emperor invited him to Russia to work on the portraits for the War Gallery of 1812 in the Winter Palace.
(hermitagemuseum.org)
He collected old masters and studied modern and classical languages, philosophy and literature. He also studied anatomy as part of his pursuit of a better understanding of the human form and also undertook human dissections in his own home as well as attending operations to improve his knowledge of the human body.
His classical painting subjects won much praise and were the making of his early reputation but he was more interested in financial success and sought portraiture commissions which were lucrative and which brought him into contact with high society. However, the direct way in which he promoted his own work was not approved of by artistic society and brought considerable criticism from his contemporaries, one of whom was Constable who painted a background for a Dawe portrait on at least one occasion.
(wapedia.mobi)
Dawe originally trained with his father as an engraver. He later became interested in painting and went on to study at the RA. He produced canvases on historical and mythological themes, as well as genre paintings in the spirit of sentimental Romanticism. He enjoyed the patronage of the Duke and Duchess of Kent and also that of Princess Charlotte and Prince Leopold. In 1819 he travelled with the Duke of Kent on a tour of Europe. His painting of portraits of military staff and diplomats brought him to the attention of Tsar Alexander I, who commissioned him to paint the portraits of the senior military staff, who had led the Russians in their resistance to Napoleon’s invasion.
(drawpaintsculpt.com) 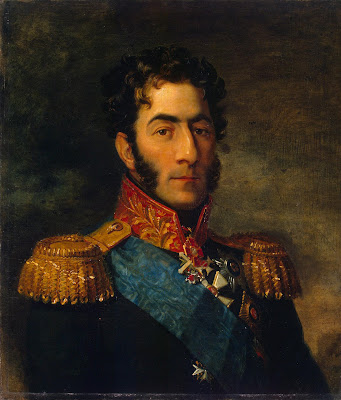 Portrait of General Pyotr Bagration (1765-1812)
Oil on canvas, 1825
From oceansbridge.com
The artist managed to create a memorable image of one of the most glorious Russian military leaders (above). Pyotr Bagration (1765-1812) was a prince, descended from the Georgian ruling family, but without a powerful patron or money to buy a position, and thus he began his military career as an ordinary infantry soldier. It took him 11 years to reach the rank of Major, being promoted solely thanks to his military talents. He was famed for remaining cool-headed in the most dangerous situations and for always taking calm, measured decisions; at the same time he was renowned for great personal bravery. Both Count Alexander Suvorov and Mikhail Kutuzov, the most famous of all Russian military leaders, placed Bagration in the most dangerous situations, where they knew it would be necessary to fight against overwhelming odds. He made his name during the Russo-Turkish War of 1787 to 1791, and went on to fight in Suvorov's Italian and Swiss campaigns (1799), against Napoleon in 1805 and 1806-7, and in the Russo-Swedish War of 1808-9. But the peak of his glory was the Battle of Borodino on 26 August 1812, which determined the outcome of the war against Napoleon. The battle lasted 6 hours and Bagration received a fatal wound, dying three weeks later. In this portrait, Bagration is shown wearing a general's uniform decorated with a pattern of oak leaves embroidered in gold thread: this uniform was worn before going into battles which were to be decisive.
(hermitagemuseum.org) 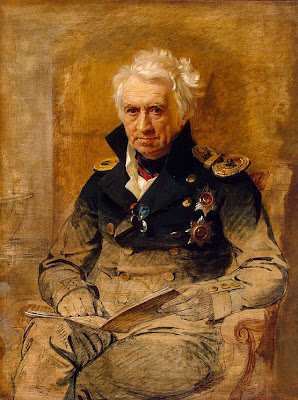 Dawe’s unfinished Portrait of Admiral Alexander Shishkov
From drawpaintsculpt.com
The Portrait of Admiral Alexander Shishkov (above) is one of the best canvases George Dawe produced in Russia apart from his main work to order - the portraits of Russian generals for the War Gallery of 1812. For some unknown reason the portrait remained unfinished. Dawe not only precisely conveyed likeness but also revealed the imperious, vigorous and stern character of his sitter.
Alexander Shishkov (1754-1841) was an outstanding statesman and man of letters. In his youth he several times navigated as a naval officer. In 1795 he published a Nautical Dictionary in Russian, English and French. In 1810 Shishkov initiated the foundation of the "Conversation of the Lovers of Russian Language" society. During the Russian campaigns against Napoleon in 1812-14, Shishkov accompanied Alexander I and wrote for him all the manifestoes, decrees and speeches, which promoted the raising of patriotic feelings. He occupied important state posts as President of the Russian Academy of Sciences, Minister for Education (1824-28) and member of the State Council. He adhered to conservative views in politics.
(hermitagemuseum.org) 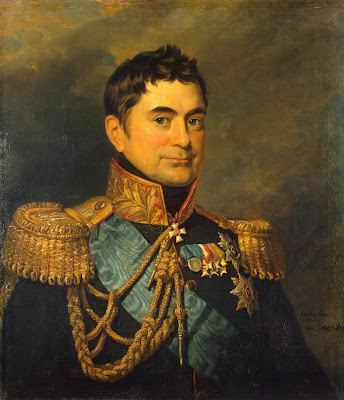 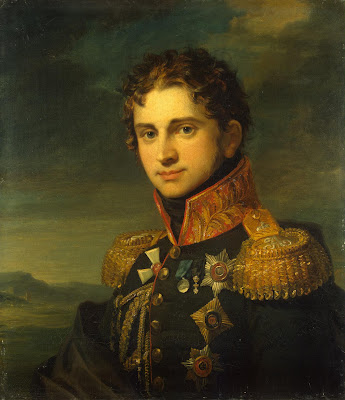 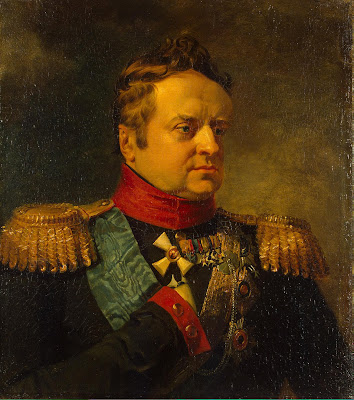 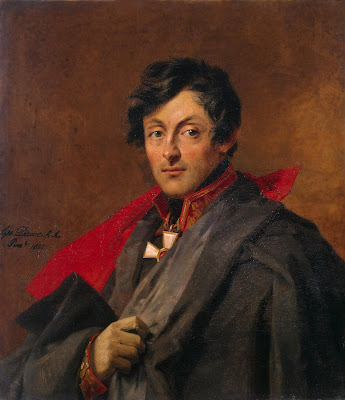 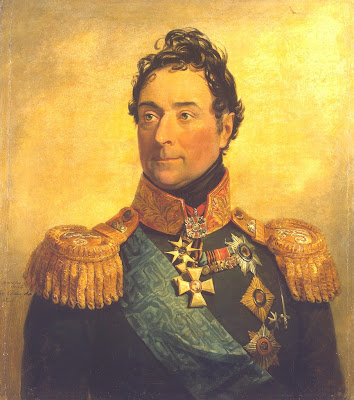 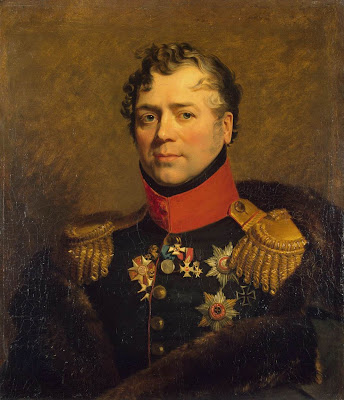 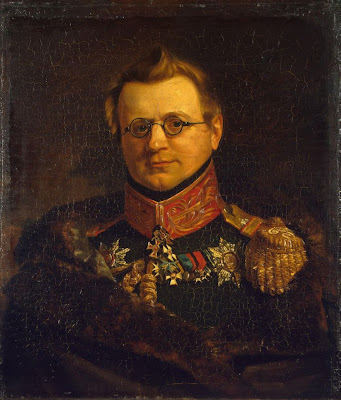 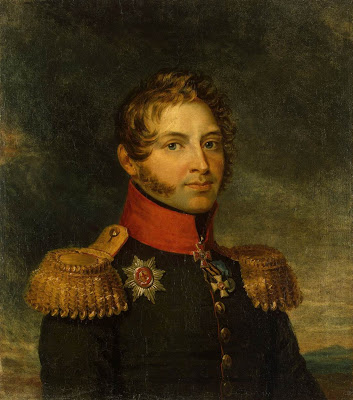 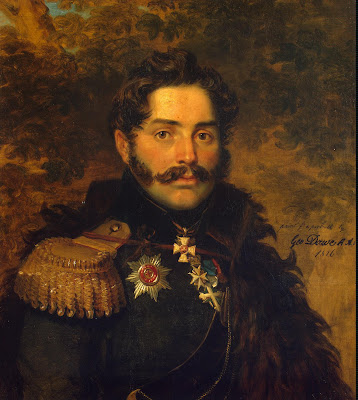 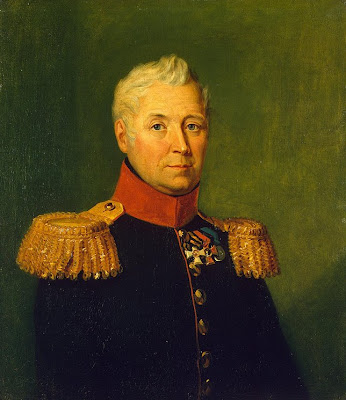 Portrait of Andrey Maslov
From arthermitage.org 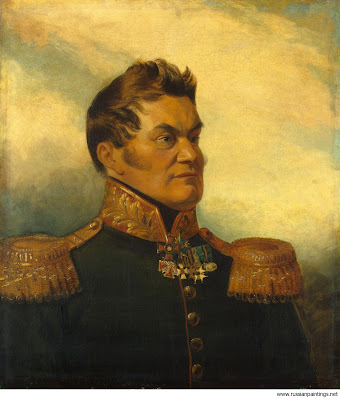 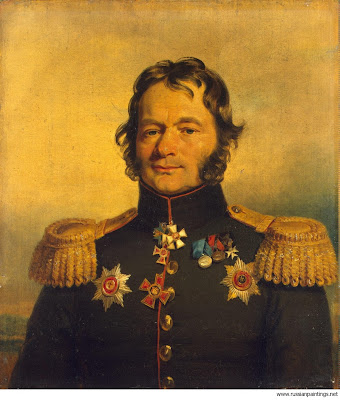 Portrait of Vasily G Kotenetsky (1769-1831)
From io.ua
The glorified military commanders of the Patriotic War of 1812 look down on us from the portraits on the walls of the War Gallery of 1812 with their handsome and brave faces "full of military courage", as Alexander Pushkin wrote about them. The dark fabric of their uniforms sets off their bright military decorations and the irridescent moire of the ribbons of their orders. The heroes painted by George Dawe with great virtuosity look amazingly alive.
Emperor Alexander I personally approved the list of generals, presented by the General Staff, whose portraits were to adorn the War Gallery of 1812. These were 349 participants in the Patriotic War of 1812 and the campaigns abroad of 1813-1814 who held the rank of general or were promoted to general shortly after the end of the war.
During the 10 years of their work George Dawe and his Russian assistants Vasily (Wilhelm) Golike and Alexander Polyakov had created 333 portraits which were put up in 5 rows on the walls of the Gallery. For various reasons 13 portraits remained unfinished. Instead of them there are frames with the names of the generals.
The whole of Russia knew the names of those whose portraits were placed in the War Gallery of 1812. One could write a heroic ode to each of them.
(hermitagemuseum.org)
Dawe became an international celebrity throughout Europe and mixed with the Russian intellectual elite. Among others he met and knew were Pushkin who wrote a poem about him entitled "To Dawe Esq." In 1826 Nicholas I invited him to his coronation ceremony and in 1828 he was officially appointed as First Portrait Painter of the Imperial Court.
He returned to England in 1828 and stayed for several months. During this time he exhibited many of his recent works and George IV was among those to whom they were privately shown.
(wapedia.mobi)
Dawe collected Old Masters and studied modern and Classical languages, philosophy and literature. He also studied anatomy and undertook human dissections in his own home, as well as attending operations to improve his knowledge of the human body.
He returned to St Petersburg in February 1829 to produce a life-size portrait of Grand Duke Konstantin Pavlovich, but became unwell with breathing difficulties, following a serious cold. He suffered from pulmonary weakness, following a childhood illness. He returned to London in August 1829 and died on 15 October at the Kentish Town home of his brother-in-law, Thomas Wright.
(drawpaintsculpt.com)
Dawe is now the least celebrated of the major late Georgian portrait painters in spite of being compared in his lifetime with both Thomas Lawrence and Jacques-Louis David. Undoubtedly, his removal from London at a vital period of his career left the field entirely clear for Lawrence, whose only clear rival he was. Dawe certainly made a rapid impression in Russia with Pushkin dedicating the following verse to him:
Why does your wondrous pencil strive
My Moorish profile to elicit?
Your art will help it to survive,
But Mephistopheles will hiss it.
Draw Miss Olenin's face. To serve
His blazing inspiration's duty,
The genius should spend his verve
On homage but to youth and beauty.
(MASTERART at masterart.com)


Posted by BEAUTIFUL PAINTINGS at 12:17 AM