THE STAFF OF MYTH

Gentlemen with Golf Club
From largesizepaintings.blogspot.com 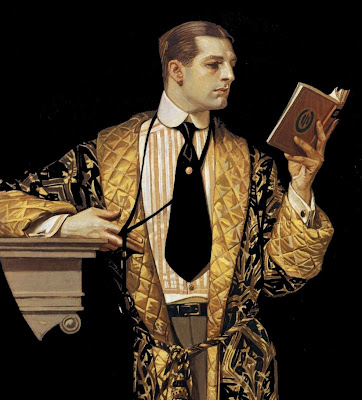 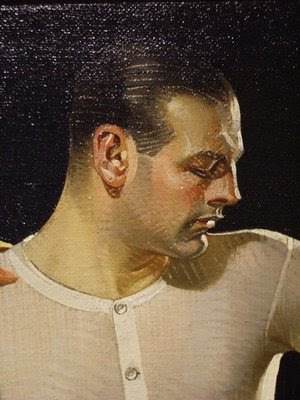 Joseph Christian Leyendecker met Charles Beach in 1903, when the young model from Cleveland first posed for him. The artist was impressed not only with Beach's handsome face and physique, but also with his ability to hold poses for extended lengths of time. Their relationship lasted until Leyendecker's death. Over the next thirty years, Beach's image as the "Arrow Man," as well as Leyendecker's other representations of him, became one of the most widely circulated visual icons in mainstream American culture. In this capacity, Beach became the symbol of American prosperity, sophistication, manliness, and style.
(Patricia Juliana Smith, glbtq arts at glbtq.com) 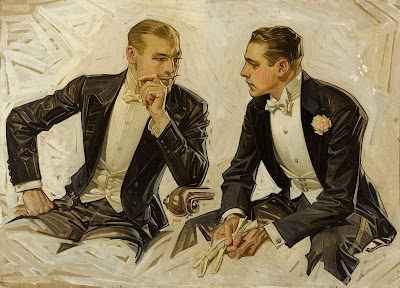 Joseph Christian Leyendecker's art was always immediately recognizable after 1905. He developed a distinctive brush technique and a unique use of highlights within shadows. Some of his originals appear almost unfinished because he let the underpainting show through to represent the brightest highlights.
(JVJ PUBLISHING at bpib.com)
To cross-hatch in oil paint, Joseph and his brother, Frank concocted a “secret formula” – a mixture of oils and turpentine – that was coveted by other artists. When mixed with paint, it enabled a slashing stroke without the brush going dry. It provided the speed and dexterity of pencil, with the graphic impact of color. The Leyendeckers were, essentially, drawing with paint. Leyendecker was a keen commercial strategist. In evaluating how to best promote himself and his work Leyendecker believed that his greatest impact as an artist was creating images easily reproduced, immediately recognized and broadly distributed for audiences by the millions to appreciate. He made certain that upon seeing his work people would say, “That’s a Leyendecker!”. Indeed, since recent advancements in the technology of printing and distribution had made illustrations a staple of the rapidly-expanding magazine industry, it’s fair to say Leyendecker became the most successful commercial artist in American history. From there he poured forth an amazing quantity of illustrations, covers and advertisements. Putting a color illustration inside a magazine was then a logistical nightmare. Color demanded special paper and printing care. Issues of magazines were practically designed around the color plates, which had to be collated between signatures or else individually glued in. One magazine, Delineator, came up with an idea: a feature comprised of a half dozen color plates that integrated text and art. By moving the text into the illustration, Delineator could insert this group between two signatures. Inserting the plates as a group incurred no more binding expense than if one sheet was inserted (it was done by hand). Other magazines quickly followed with similar color sections. This new ability to reproduce color illustrations took the magazine industry by storm and the Leyendecker competed strongly for works that merited the expense.
(5election.com) 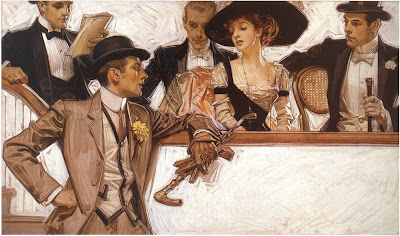 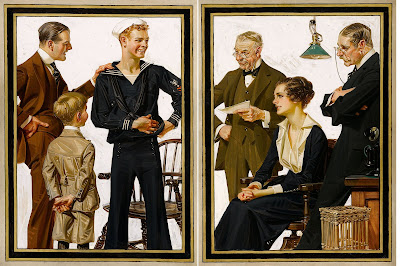 An elegant lifestyle
From williamwray.blogspot.com 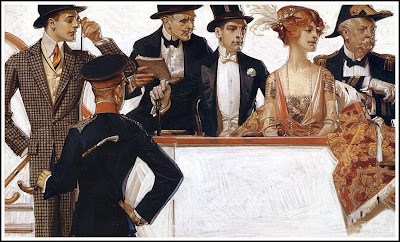 The Arrow Collar Man
From RADIKAL FOTO at radikal.ru

His style was marked by wide, deliberate brush strokes and remarkable eye for detail and non-detail. He obviously worked very fast, carefully illustrating the important aspects of the subject while washing the unimportant with spontaneous splashes of color and texture. Since he had to generate lots of art very quickly, he would keep 'parts' of paintings handy as sketches, and many times incorporate those into more than one painting. He was known to draw heads of Arrow shirt models as recreational sketching, leaving the neck areas blank for adding in collars later. The most wonderful part of his art were the images of people, their expressions and posture. He didn't just paint people. His subjects were always dramatic, and posed in active/interactive positions, many times under great stress. His women were beautiful, his men were handsome and the incorporation of children, angels, animals and all kinds of floral embellishments made each painting a fascinating vision.
(Fred Showker , DT & G design at graphic-design.com) 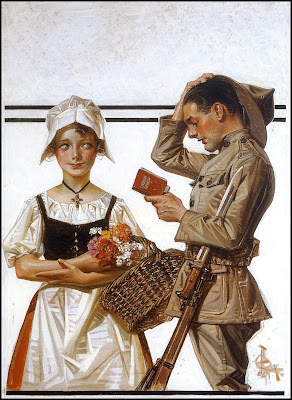 Soldier and French girl
From RADIKAL FOTO at radikal.ru 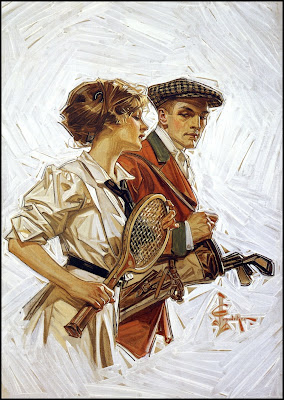 Golf or Tennis 1910
From markroutt.wordpress.com 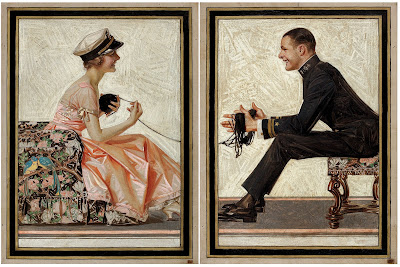 Leyendecker's technical skill and originality were beyond reproach, or even reach. His draughtsmanship was perfect, and his great speed could accelerate to meet deadlines. His secret paint formula and legendary aloofness added to a mystique that often seemed the stuff of myth. Though Leyendecker was a magician with the paint brush, it would be uninstructive to compare him to other great painters of his era. His aims were not theirs. As a graphic designer, however, he was one of the greatest.
The advertisements and magazine covers Leyendecker created are strong, lean and logical, usually with a whimsical flavor and complemented by his flashy style. The final product was a buzzing latticework of juicy brushstrokes which belied their arduous preparation. As with good magicians, Leyendecker showed his audience only what he wanted them to see. Each published painting was the distilled product of a great amount of work. Once satisfied with his pencil sketch of an idea, Leyendecker would pose models in costume and directly paint oil on canvas, sketching the figures in various positions until the pose was just right. As a point of pride, Leyendecker always worked with models, dismissing the use of photographic reference as a wrongheaded distraction. His sketches have a lively spontaneity; they also map his thought process. Some consider them better than the finished paintings. No matter how well Leyendecker's preliminary figure sketches came out, he always painted a more refined final version after the model was dismissed. This method allowed him to extract the essence of the figure, to change it from a person into a personage. Not only holiday symbols, but every character Leyendecker used underwent his refinement process, becoming an icon of itself.
(Roger T. Reed, TFAO at tfaoi.com) 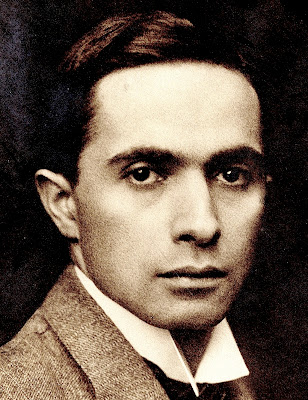 Leyendecker's last years were sad. The ascendancy of photography meant he had to go himself to peddle his gorgeous paintings to art editors, which he had never done before. He died at home of a heart attack in 1951 with Beach close at hand. The funeral was held in the studio of Leyendecker's home. The pallbearers were virtually the only ones present with Rockwell being one of the pallbearers, the rest of whom were JCL's male models. The New Rochelle newspaper reported, however, that a funeral mass was held at Blessed Sacrament at ten o'clock, July 28, 1951. Having made and spent a fortune, Leyendecker was buried in an unmarked grave in Woodlawn Cemetery at 233rd Street in The Bronx, New York. The grave was marked by the director of The Haggin Museum in California several years later.
(digitalconsciousness.com)

Posted by BEAUTIFUL PAINTINGS at 2:30 AM