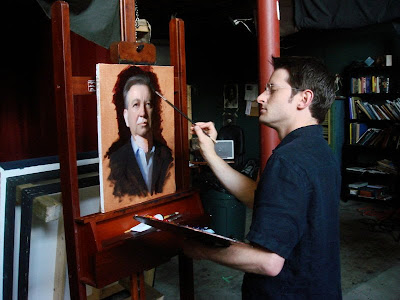 In the late 1980s, on a family trip from Burlington, VT, to New York City, young Adrian Isaac Gottlieb came face to face with his first Rembrandt. Today, at 36, he can’t quite recall which one it was among the Met’s works by that paragon among old masters, but he still feels its impact powerfully and precisely. “The sum of all its components came across as larger than life,” Gottlieb says. “It spoke to me of his ability to see beneath the surface of form and texture to the human spirit. And I felt that was the greatest type of art there was: to take something that you paint and make it so real that meeting that person or seeing that thing or going to that place would seem superfluous.” More than two and a half decades later, Gottlieb is well on his way to fulfilling that artistic goal. Though the modest, soft-spoken painter would never be so grandiose as to suggest his works rank among those of the artists he most admires, he has deliberately, meticulously set about to learn his craft as painters of centuries past learned it. The result: works likely to stop viewers in their tracks, much like the young artist himself was riveted all those years ago; paintings of present-day subjects rendered with both striking accuracy and a depth of spirit worthy of an old master.
(Norman Kolpa, SouthwestArt at southwestart.com) 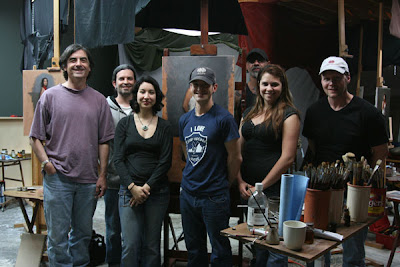 Born and raised in Vermont, Adrian Gottlieb’s talent and observation skills were evident from early childhood. He worked from his imagination, from life, from rented taxidermy specimens, and copied 19th century zoological drawings and portraits, building an early foundation for the pursuit of representational expression. By 15, Adrian had exhibited in the state capitol and been recognized by Vermont's Governors Madeline Kunin and Dr. Howard Dean. His painting of Abenaki Tribal Council members won second place in the Congressional Art Competition and was purchased by the University of Vermont for permanent exhibition. In 1993, Adrian was chosen a first place winner of the Young Inventors and Creators of America Award, sponsored by The Foundation for a Creative America; a Div. of the US Patents, Trademarks, and Copyright Offices. The award culminated in a ceremony and exhibition held at the Jefferson Building of the US Library of Congress in Washington, DC and a commendation from Vice President Al Gore.
(waterhousegallery.com) 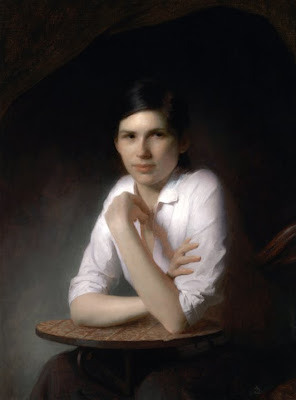 The Penitent Sarah
From waterhousegallery.com 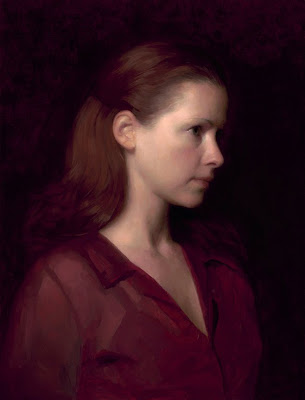 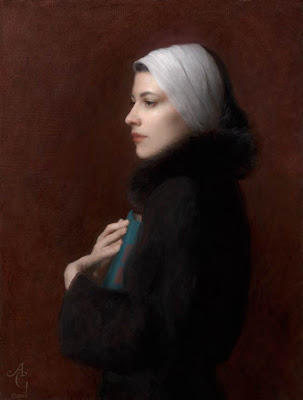 Adrian Gottlieb began Atelier study during his undergraduate years at Carnegie Mellon University College of Fine Art and Rochester Institute of Technology, School of Art & Design. Inspired by realist imagery from an early age, Gottlieb became increasingly aware of the dearth of training in hands-on methods and techniques. He enhanced his university studies by attending Charles H. Cecil Studios Summer Intensive programs for three summer terms. Under the tutelage of Charles Cecil, Gottlieb was first exposed to the near lost drawing and painting techniques developed from the Renaissance through the Boston School.
Following the 1998 Summer Intensive, Gottlieb returned to the US to pursue independent study in gross anatomy and anatomical drawing (RIT and Rochester University Medical School). He earned his BFA (with honors) later in 1998 and immediately enrolled in the Intensive Drawing Program offered by the Florence Academy of Art in Italy. He was later invited to remain at the FAA. He completed the Painting and Drawing program in 2001. After serving as an instructor from 2000 to March 2002, Gottlieb left the academy to focus on advanced techniques and a personal style and vision.
During 2002, he was chosen first place winner of the Art Renewal Center (ARC) annual international scholarship competition and was awarded "honorarium" which made possible his one-on-one study of advanced composition with expatriate classical realist painter Maureen Hyde during 2002/2003. Adrian returned to the US during the summer, 2003 and was invited to help develop a classical realist curriculum to be offered at the Los Angeles Academy of Figurative Art in California.
(artvt.com)
Adrian Gottlieb’s works have been exhibited at the Panorama Museum in Germany, the Oglethorpe University Museum of Art in Atlanta, Georgia and the Pasadena Museum of California Art, California. His paintings are in private and public collections throughout the United States, in Europe and Scandinavia including the renowned Wilton House collection in Wiltshire near Salisbury, England. Painting directly from life, Gottlieb assiduously avoids the use of photographic reference material or optical aids.
(waterhousegallery.com)
The followings are the Four Stages of Verdaccio taught by Adrian Gottlieb (All images from underpaintings.blogspot.com and articles from artistnetwork.com): 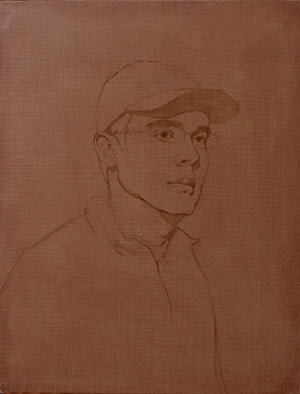 
2. “In this step I build up the piambura, or white base, thinly so that the finished painting will have a luminous and translucent effect. It’s important that I create a good value relationship and blueprint of the form right from the beginning.” 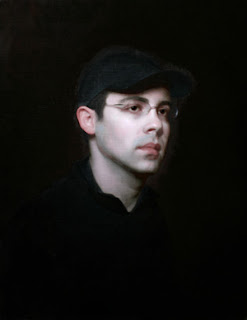 3. “The Verdaccio technique, which uses a verdaccio layer is particularly advantageous for a bright figure against a relatively dark background. I fully model the forms, using temperature variations (cool and warm) between blue-greens and reds. I keep the painting too light (in value) so when I glaze the piece, the tone will fall back down.” 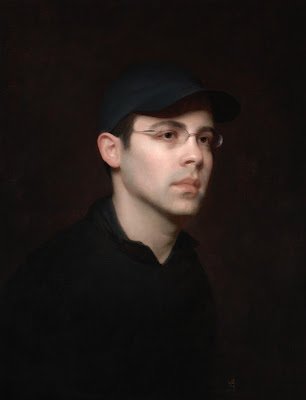 4. “You can see the results of the primary and secondary glazes, executed in thin layers, using lakes of color that are similar in degree of transparency and tint. I then apply straight color to work out the exact color notes and establish the relationship between figure and ground in Portrait of Gregg.” -Adrian Gottlieb. 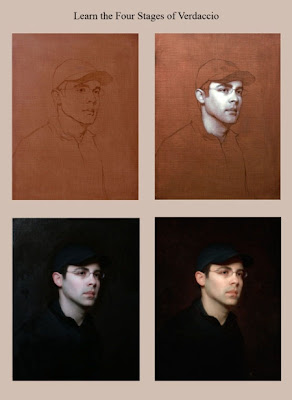 The four stages of Verdaccio Technique
Under painting technique in preparation for final glazing
From gottliebstudios.com

“To quote Ingres, drawing is truly "three and a half quarters of painting." Whether one plans to create a drawing or a completed painting, the principles are much the same. One looks to capture form, the rhythms of the contour, anatomy, gesture, and value. When the planned result is a painting, the only additions are color and the texture lent by brush strokes."
"Creating a realist painting is fairly simple to describe. Conversely, creating a good realist painting is difficult to accomplish. Bearing in mind the requirements of the above-mentioned drawing concepts, the idea is to bring about a fully unified piece in color. More so than in drawing, the basis of a successful painting lies in the creation of illusion: the illusion of volume, the illusion of distance and space, the illusion of light, and even the illusion of color itself. Throughout the process, I strive to define and attain the precise color/values of the background, the shadow shapes, the darkest darks, the lightest lights (I try to add color even for the brightest highlight) the basic lights, and the transition tones. Ultimately, all of these will serve as a blueprint for the painting. I dedicate as much time as is necessary to ensure I meet these criteria."
"At the end of each painting session, I soften most of the edges. This makes it easier for me to work back into the painting at the beginning of the next session. Many of the colors will have dried and the oils will have settled to the bottom of the layer, leaving the top layer of pigment unsaturated. The result is a matte effect; the layer is so dull that the proper color/values cannot be judged. These absorbed areas must be oiled out or retouched. While some painters prefer using walnut oil or Damar retouch varnish, my technique is to apply copal retouch varnish in order to re-saturate the colors. Medium can accomplish this just as well when I intend to work back over a passage."
"One of the goals of the naturalist painter is to accomplish the most information using a minimal number of brush strokes. This is much easier said than done. It is simpler to apply more brush strokes than necessary; however, in doing so the painting will inevitably develop a tortured appearance. This goal forces the artist to constantly refine brush stroke technique. My current palette for flesh consists of lead white, lead tin yellow, yellow ochre, vermilion, transparent red oxide, pyrol ruby red, cobalt blue, transparent sepia, olive green and ivory black. I mix all colors on the palette before application. Mixing color directly on the canvas can produce a muddy color and texture. It can technically also result in more vibrant colors, but I find that mixing the colors on the palette first produces consistently cleaner colors. When mixing any color, I limit the number of source colors to four or less. Any additional source colors can negatively affect the purity of the final color. Ideally, one uses only as many colors as one absolutely needs. It is essential that my finished pieces appear to glow. If the painting does not appear to emit its own source of light, I find the piece to have a dissatisfying and dead feel.” – Adrian Gottlieb.
(adriangottlieb.com) 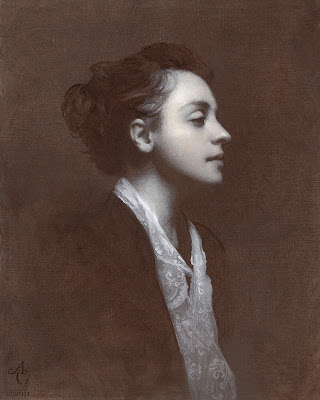 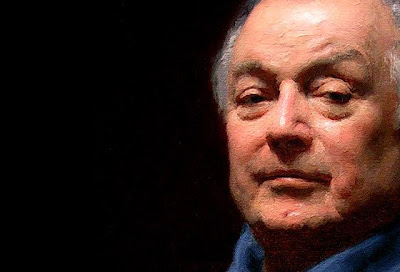 Detail of the Photographer
Portrait of Jim French
From gottliebstudios.com

Viewing Gottlieb's paintings in person, one is immediately struck by the painterly quality of his work. While he has expanded his themes to include varied subject matter, Gottlieb’s passion remains centered on figurative compositions. It is in this genre that Gottlieb excels, infusing the two-dimensional surface with a luminous and quality that conveys the illusion of life-force. His works can be found in both private and public collections throughout the United States and Europe. He has exhibited at the Panorama Museum in Germany, and the Oglethorpe University Museum of Art in Atlanta and the Pasena Museum of Fine Art, in addition to galleries across the United States and exhibitions in Italy and is regularly invited to participate in the California Art Club's Annual Gold Medal Juried Exhibition. Adrian Gottlieb is currently represented by S.R. Brennen Galleries in Palm Desert, California, Scottsdale, Arizona and Sante Fe, and Galerie Michael in Beverly Hills, CA. He is invited annually to particiupate in the "Great American Figurative Artists" exhibition presented by the Waterhouse Gallery in Santa Barbara, CA.
(adriangottlieb.com)

Posted by BEAUTIFUL PAINTINGS at 1:01 AM