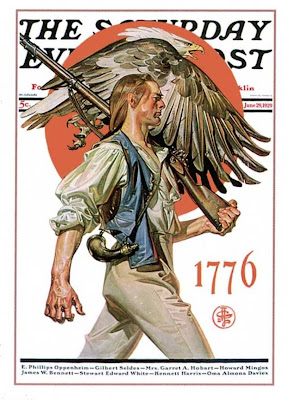 Although the terms militia and minutemen are sometimes used interchangeably today, in the 18th century there was a decided difference between the two. Militia were men in arms formed to protect their towns from foreign invasion and ravages of war. Minutemen were a small hand-picked elite force which were required to be highly mobile and able to assemble quickly. Minutemen were selected from militia muster rolls by their commanding officers. Typically 25 years of age or younger, they were chosen for their enthusiasm, reliability, and physical strength. Usually about one quarter of the militia served as Minutemen, performing additional duties as such. The Minutemen were the first armed militia to arrive or await a battle.
Although today Minutemen are thought of as connected to the Revolutionary War in America, their existence was conceived in Massachusetts during the mid-seventeenth century. As early as 1645, men were selected from the militia ranks to be dressed with matchlocks or pikes and accoutrements within half an hour of being warned. Unfortunately, one thing the Minutemen lacked was central leadership. This disadvantage would lead to their dissolution.
In February of 1775 Concord was one of the first towns to comply with the order to create Minutemen companies out of the militia. Of approximately 400 militia from Concord's muster rolls, one hundred would also serve as Minutemen. When a battle took place Minutemen companies from several towns combined their units. An officer from the 43rd Regiment of Foot was sent to the North Bridge in Concord with a number of light infantry. Minutemen from Concord, Acton, Littleton, and other towns combined forces. After a few volleys were fired, the British light infantry retreated back to the Concord Common area. Lacking central command, with each company of Minutemen loyal to their own town, they did not pursue the redcoats. In the running battle that ensued fifteen miles back to Boston the Massachusetts militia would see their last action as Minutemen in history. The militia would go on to form an army, surrounding Boston and inflicting heavy casualties on the British army at Bunker and Breed's Hill.
(Andrew Ronemus at ushistory.org)
The Battle of Lexington and Concord was made up of two battles that began on April 18th, 1775. British troops were sent to Concord to capture John Hancock and Samuel Adams, but both men had been warned about the British attack. The night of April 18th, Paul Revere rode through Concord warning everybody about the British attack. So when the British came in to take and attack the Rebels, the Minutemen, Americans who were "ready to fight in a minute," were waiting to attack at Lexington. The Americans were withdrawing when someone fired a shot, and the British troops started to fire at the Minutemen. The British then charged with bayonets. Nobody knows who shot first. "Don't fire unless fired upon. But if they want a war let it begin heres" said Captain John Parker, commander of the Minutesmen.
The British killed many Minutemen and wounded many more in this Battle at Lexington. The rest of the Minutemen scattered into the woods. After this fight, the British found out that Hancock and Adams had escaped. So the British marched towards Concord looking for ammunition. As the British went to look at a nearby farm for weapons, they ran into a group of minutemen at Concord's North Bridge. There was a big fight, and the Minutemen made the British retreat. The Minutemen tried not to let the British retreat, but the retreat was successful. The Battles of Lexington and Concord were battles that took many lives. By the end of the day, British troops had lost 273 soldiers, while the Colonists lost only 94. 18 of these Colonists had died during the battle at Lexington. The Revolutionary War had begun. Ralph Waldo Emerson, a famous poet, called the Battle of Lexington "the shot heard 'round the world," because this battle began the Revolutionary War. His poem is on a monument by Concord's North Bridge.
(library.thinkquest.org)
Actually, the concept of minute-men existed in America as early as the 17th century, while the term itself came into use in 1759 during the French and Indian War. The title "minute-men" was formally adopted the year before the American Revolution started. At that time, in October of 1774, the Provincial Congress of Massachusetts voted to enroll 12,000 men under the title of Minute-Men — volunteers who would be ready at a minute's warning to take to the field with arms. After Congress authorized a Continental Army under the command of George Washington, minutemen units eventually ceased to exist. But their contribution as a trained and battle-hardened corps of veterans was an important and significant force as patriots took up arms to oppose the British army in the Revolutionary War.
(earlyamerica.com)

Posted by BEAUTIFUL PAINTINGS at 11:36 PM No comments: