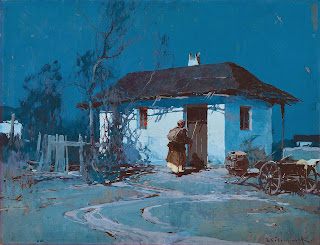 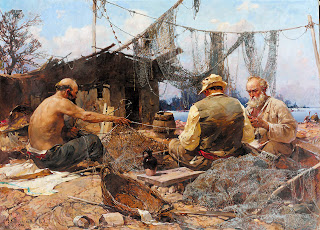 Night in Ukraine
From bukowskis.com
Kolesnikov was born in the Ukraine and, after studying at the Odessa Art School, he entered the Imperial Academy of Fine Arts in 1903 without having to pass exams, such was his talent. Here he was taught by Ilya Yefimovich Repin (1844-1930) and Vladimir Makovsky (1846-1920). The influence of the Russian Realist tradition established by these artists’ can be seen in the present work. Repin’s masterpiece Barge Haulers on the Volga, for instance, also portrays the everyday struggles and hardships of the poor.
Kolesnikov won praise from his teachers and the public alike and was one of the favorite artists of Tsar Nicolas II, who once gave the painter an engraved cigarette-case as a personal gift. After the Russian revolution, however, he moved to Yugoslavia though he continued to paint and exhibit throughout Europe. Kolesnikov was gifted with a bright individual style, standing out among the most prominent artists of his time. He left a rich and diverse legacy and was equally skilful in genre and landscape as well as in graphic and painting techniques. After emigrating he remained faithful to his Russian subjects, with bright winter landscapes and colorful festivities among his favorite themes.
(masterart.com) 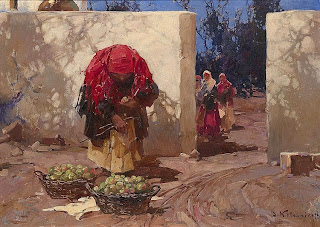 The Apple Seller
From artfact.com 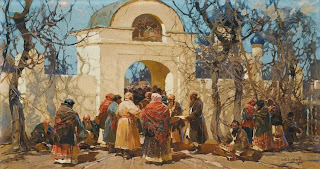 The Russian Sale
From artfact.com 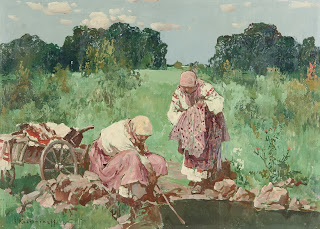 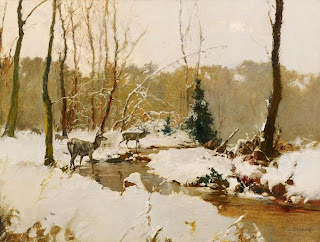 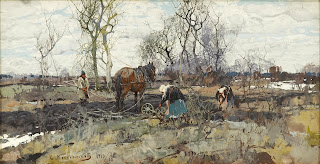 In the Fields
From masterart.com

In this above work, Stepan Feodorovich Kolesnikov depicts the harsh realities of Russian rural life. Three peasants have been trying to plough the boggy field but it seems that the plough itself has broken. One of the women is attempting to fix the axle while the tall muscular horse waits patiently nearby. The landscape is painted in a dreary and muted palette leaving no optimistic sense that there will be a bountiful end product to the workers’ labors. The black soil and stark trees emphasize the unfertile nature of the landscape and the struggle of the figures. The figures are anonymous and Kolesnikov has, therefore, painted a scene that reflects the general hardships of agricultural life in Russia and the conditions that all other farmers must contend with.
(masterart.com) 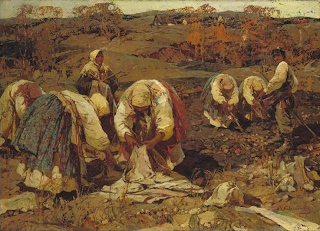 The Potato Harvest in Belorussia
(Private Collection)
From zolotoivek.tumblr.com
Similar themes are explored by Kolesnikov in The Potato Harvest in Belorussia. A group of peasant women labor in the sun to harvest the potato crop, while a male figure watches them work, like In the Fields. The women are bent double, which highlights the backbreaking hardship of their work and again their faces are hidden, so that they represent their kind as a whole. In neither work is the landscape idealized. Rather it represents a barren place where one must toil to reap any sort of reward. In stylistic terms both works exhibit a muted palette and the broad brush strokes which Kolesnikov favored.
(masterart.com)
Posted by BEAUTIFUL PAINTINGS at 11:48 PM No comments: