INTERPLAY OF LIGHT AND SHADOWS 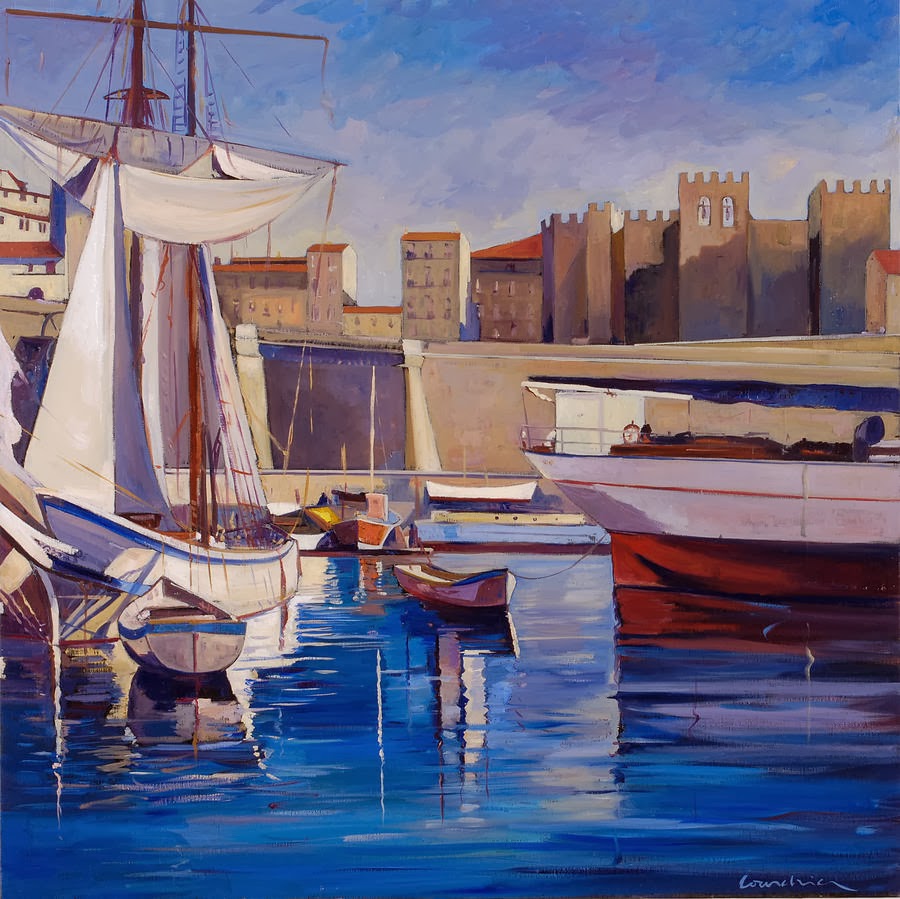 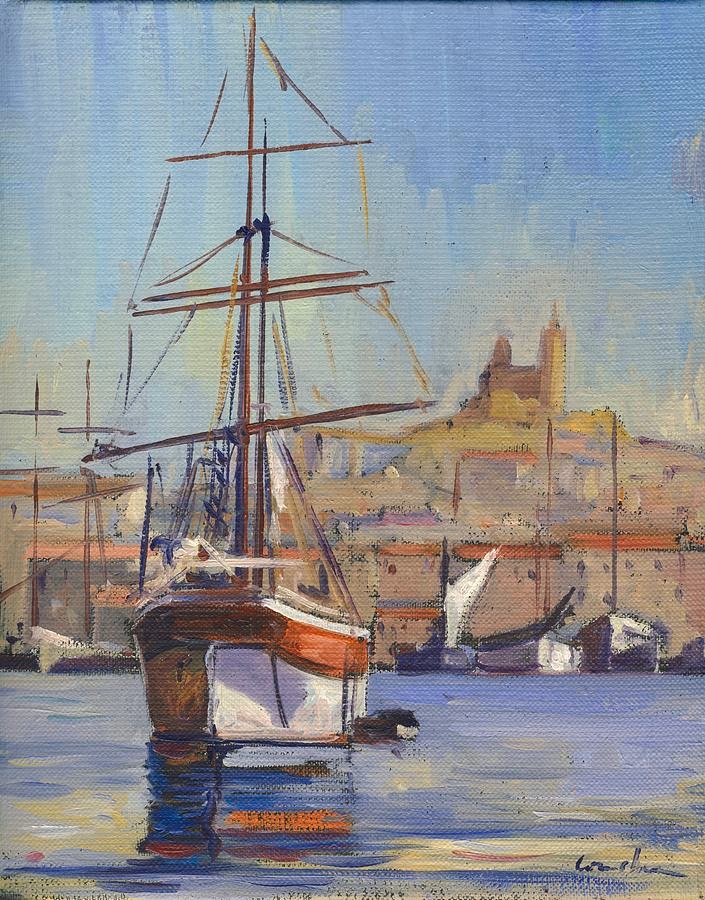 Boat in the port
Images from fineartamerica.com

Born 1955 in Morocco of French parents, Jean-Paul Courchia moved to the Provence region of France in 1964. Here he began his career as an artist with his first exhibition in 1981. In 1994, the prestigious Jouvene Gallery of Marseille started to represent his works. Jouvene has been associated with some of the finest French painters including Cezanne and Van Gogh. With the addition of Courchia they continue their support of the traditional Provençal landscape painting.
Courchia shares many common features with he best-known Provençal painters. These include a deliberate forcefulness and willful expression of emotional power. the exaggeration of volume, color and line are also manifest in Courchia’s process, often through distortion. His compositions are enhanced by superimposing broad strokes of color and light over scenes of everyday life. His canvases are serene reminders of the past. His simplification of objects into shapes and broad bans of color disguises a complexity of emotion. His dramatic use of shadows and reflections give motion and vitality to his works. The absence of figures does not imply a barren or abandoned landscape devoid of life. The colors and shapes themselves are the life of Courchia’s paintings and they are as striking and animated as any human figure, if not more so.
Gallery Revel, New York began their relationship with the artist in 1998, bringing the painting of Provence to the Americas. In June of 1999 and again in 2005, the National Arts Club in New York hosted a one-man show for Courchia. His work has great appeal, bringing the warm sunshine and leisurely life style of Provence alive on the canvas. Thematically his paintings concentrate on the subjects most associated with the region, i.e. the cafes, the hidden gardens, the harbor and the magnificent views. What typically attracts the viewer is the contrast between the simplicity of style and the complexity of emotion.
(mdhfinearts.com) 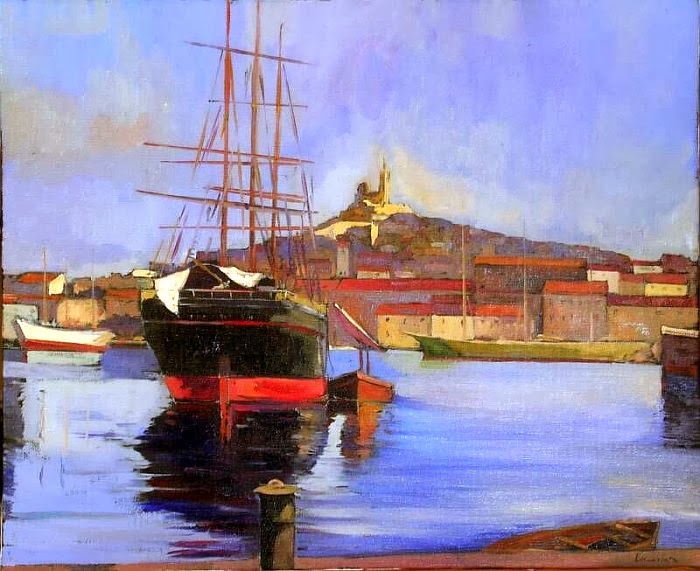 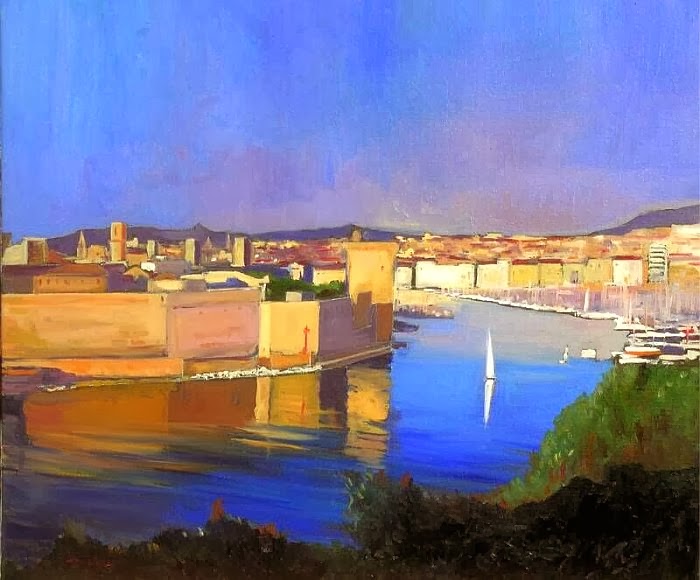 Jean-Paul Courchia is a highly successful painter both in Europe and in America. His oils on canvas were displayed in Marseille in the famous Provençal Gallery Jouvène, which Van Gogh and Cezanne called home for their artwork. Her Highness Queen Paola of Belgium, Madame Nobutaka Shinomiya, wife of the Consul of Japan in Marseille, and Mr. Aldon James, president of the National Arts Club in New-York, are avid collectors of his work.
Jean-Paul Courchia is also a unique speaker, able to explain through a simple approach the way we see art. He is a physician and a world renowned artist painter. He splits his life among his office, his studio and the department of ophthalmology where his two passions merge: he works on the relationship between art and the brain by analyzing eye’s movements.
(fineartamerica.com) 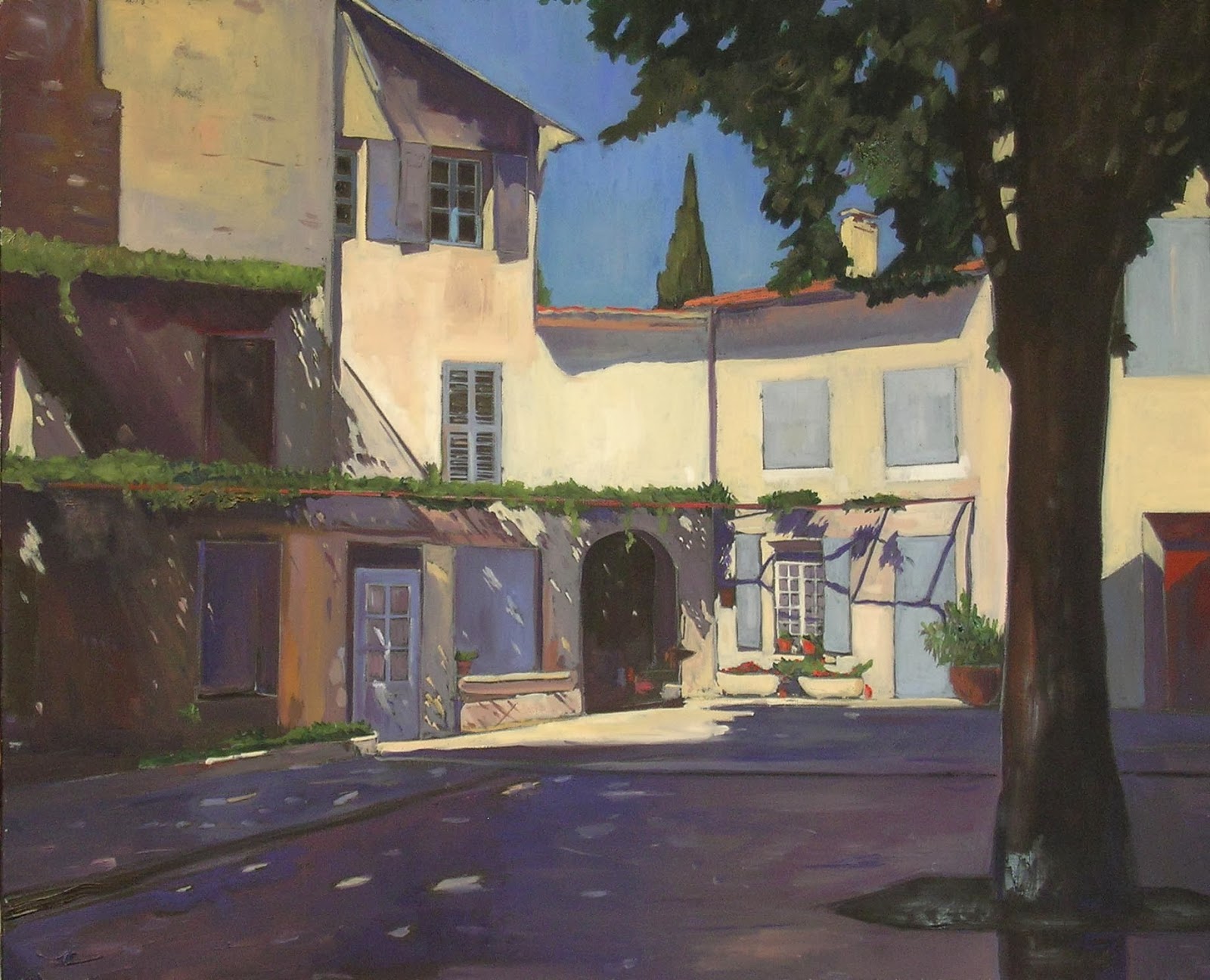 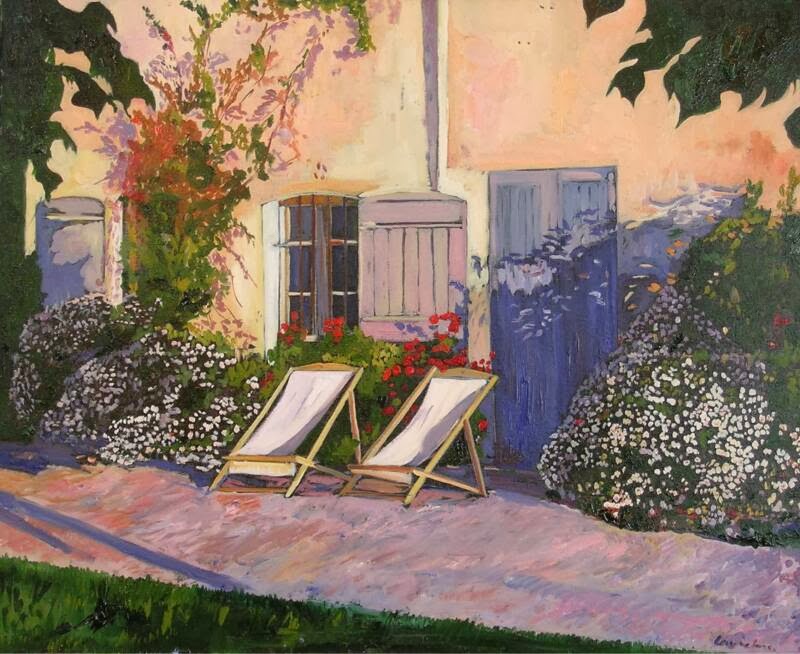 Posted by BEAUTIFUL PAINTINGS at 1:48 PM No comments: 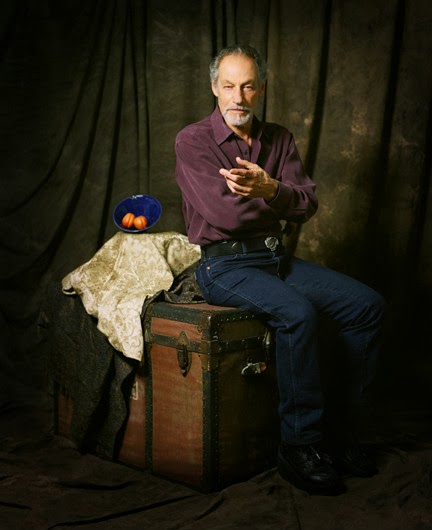 David A. Leffel
Portrait by Donna Granata - 2008
From focusonthemasters.com 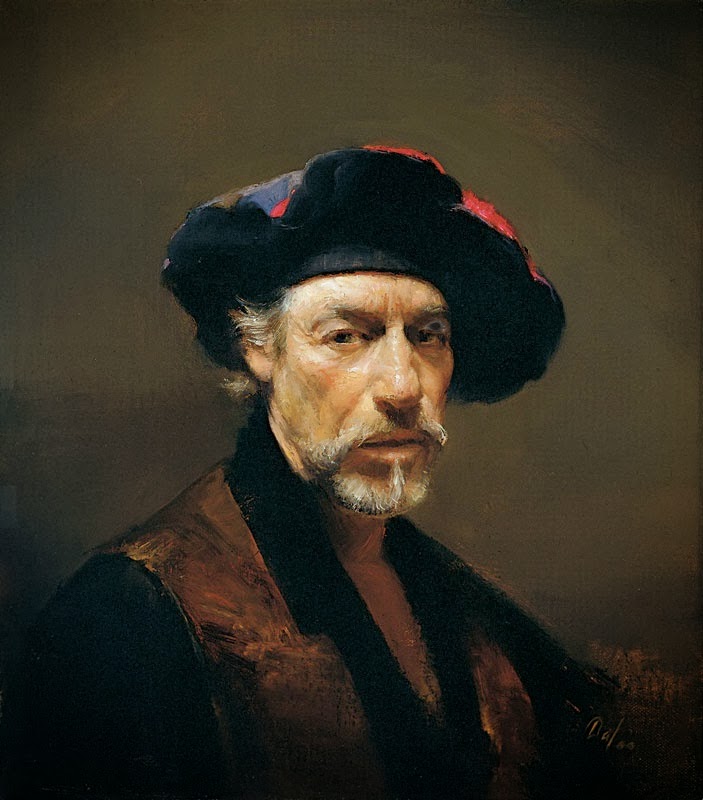 Self Portrait
From pinterest.com 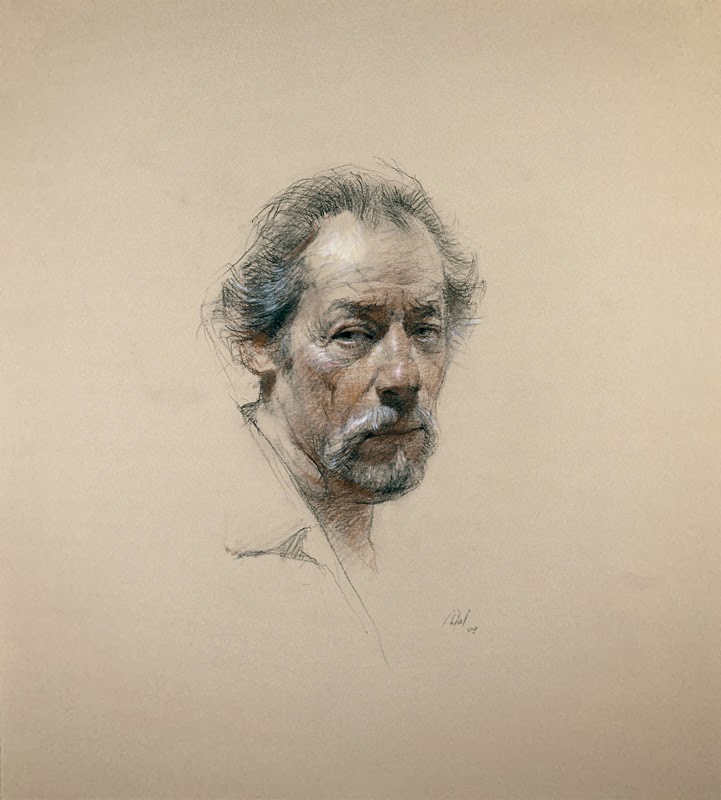 Self Portrait drawing
From freeblueprints.net

Born in Brooklyn in 1931, the distinguished painter David A. Leffel spent eleven years of his childhood battling a bone disease in various hospitals. He used this time to hone his drawing abilities. This passion eventually led him to enroll in Parsons School of Design, as well as Fordham University. At the Art Students League of New York, he flourished under Frank Mason and ultimately taught there for 25 years.
In 1992 Leffel and his partner, the distinguished painter Sherrie McGraw, moved to Taos, where their studios overlook the Sangre de Cristo Mountains. Well-known to art students worldwide through his bestselling books and videos, Leffel conducts workshops throughout the country and launched his own annual awards program for excellence in painting.
(Excerpts from the article “David A Leffel: The Elegance of Paradox” by Rachel Wolf, Fine Art Conoisseur, October 2011) 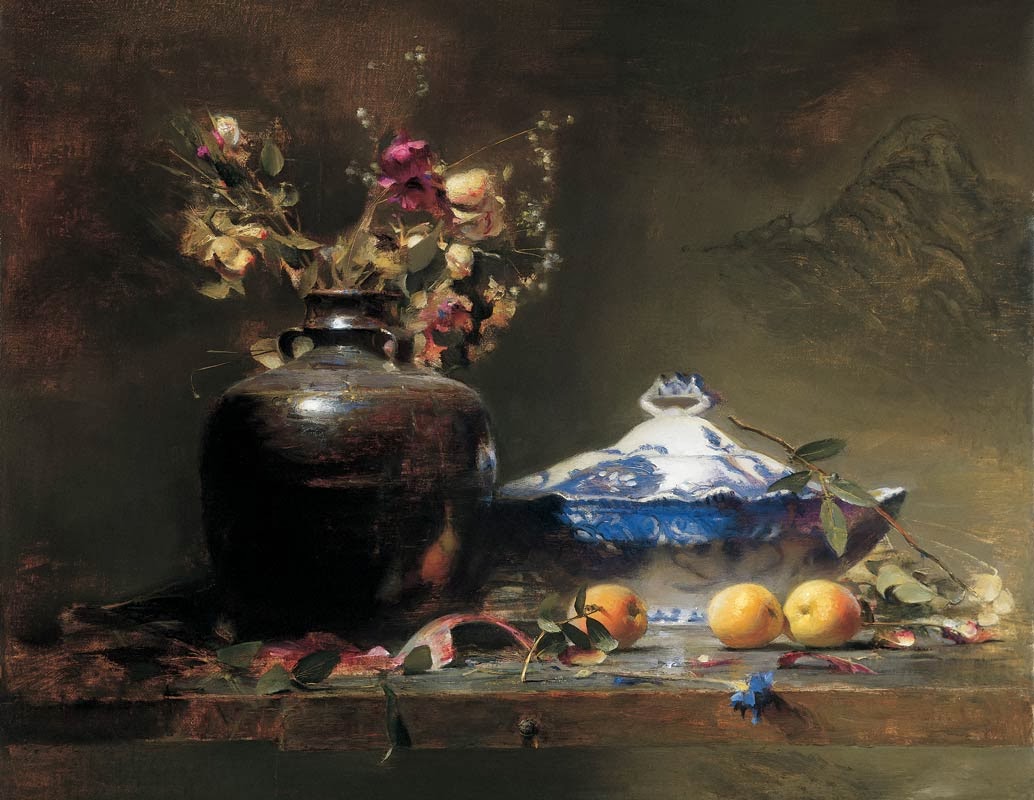 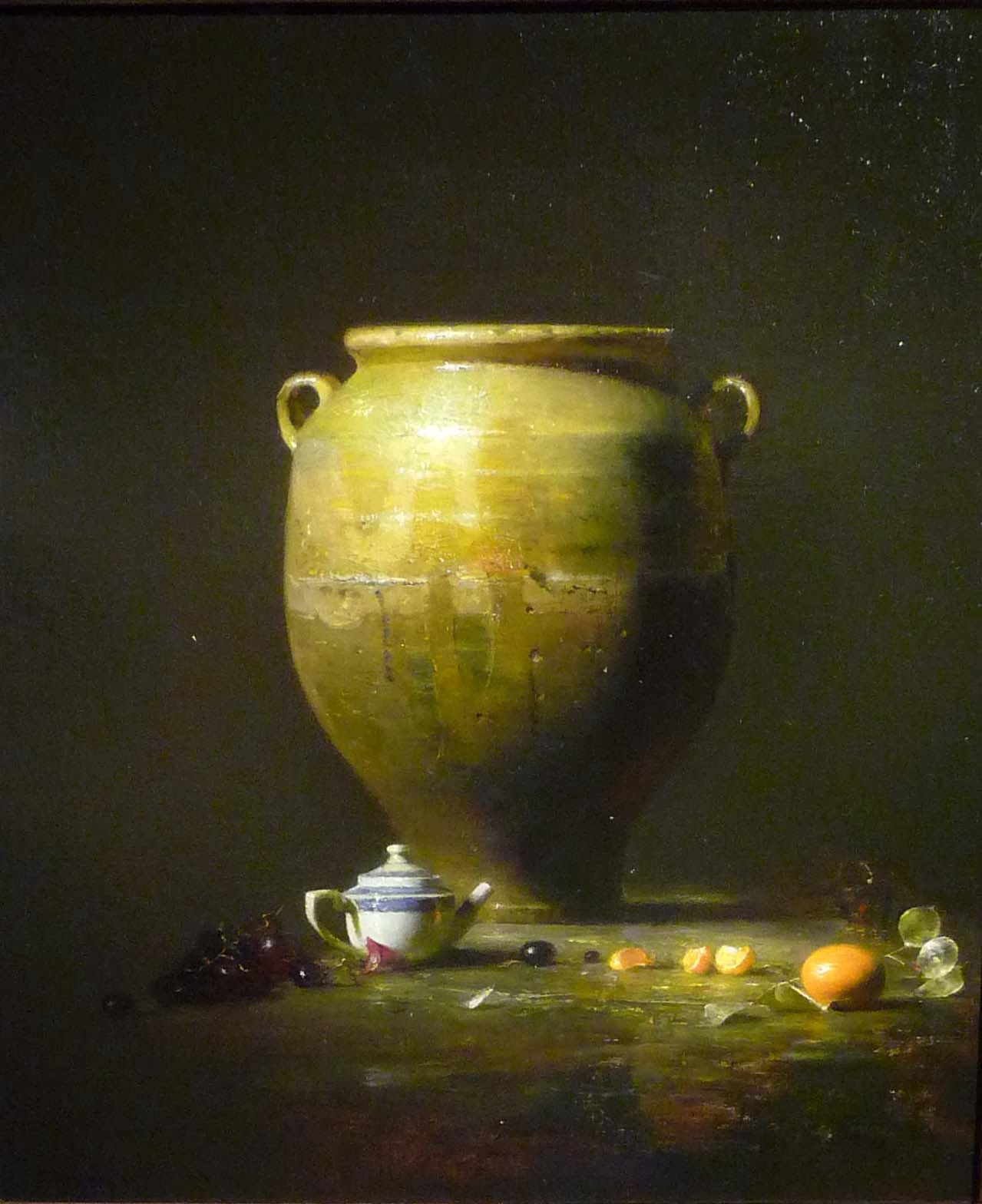 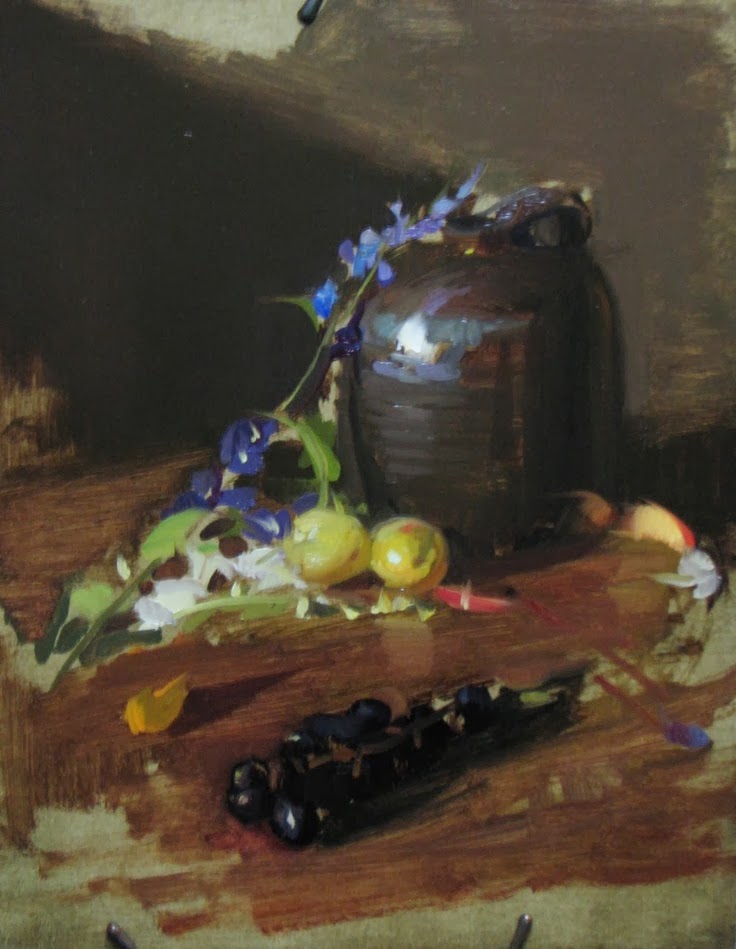 In 1959-1960, Leffel studied at the Art Student's League in New York City. There he developed the chiaroscuro technique that has led to his frequent tribute as a "20th-century old master."
In 1972 Leffel returned to the Art Students League as an instructor. Under the influence of the great 17th-century Dutch masters, especially Rembrandt, Leffel's work reflects a personal belief that a painting must convey a sense of mystery and beauty. Throughout the interplay of light and shadow, through texture and shape and color, Leffel transforms the simple and ubiquitous objects of everyday life into rich creations of enigma and presence. Although he concentrates much of his efforts on still lifes and portraits, Leffel has done more landscape paintings with strong skies, dark clouds, and a magnificent shaft of light. For the self-described light and shadow painter, the canvas presents the challenge to create "beauty and simplicity through colors, textures, shapes, lights, and darks, as they are the tools of the artist. If he can see."
(americanartinvitational.com) 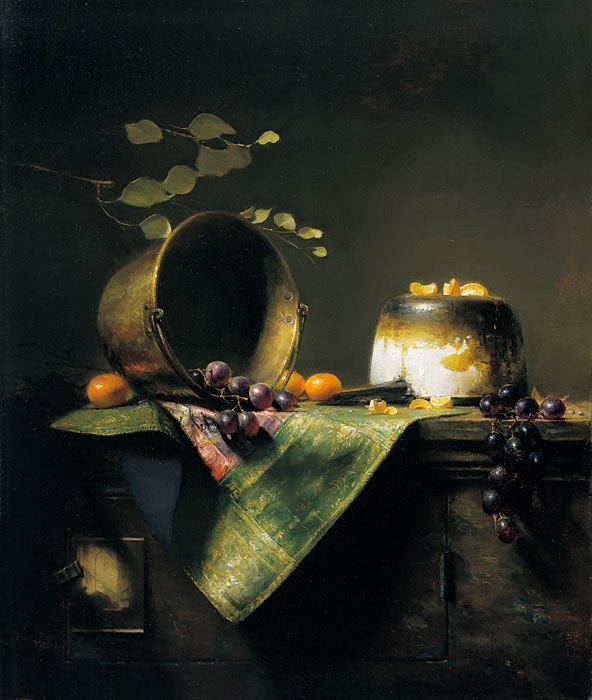 Love For Three Oranges
From brightlightfineart.com 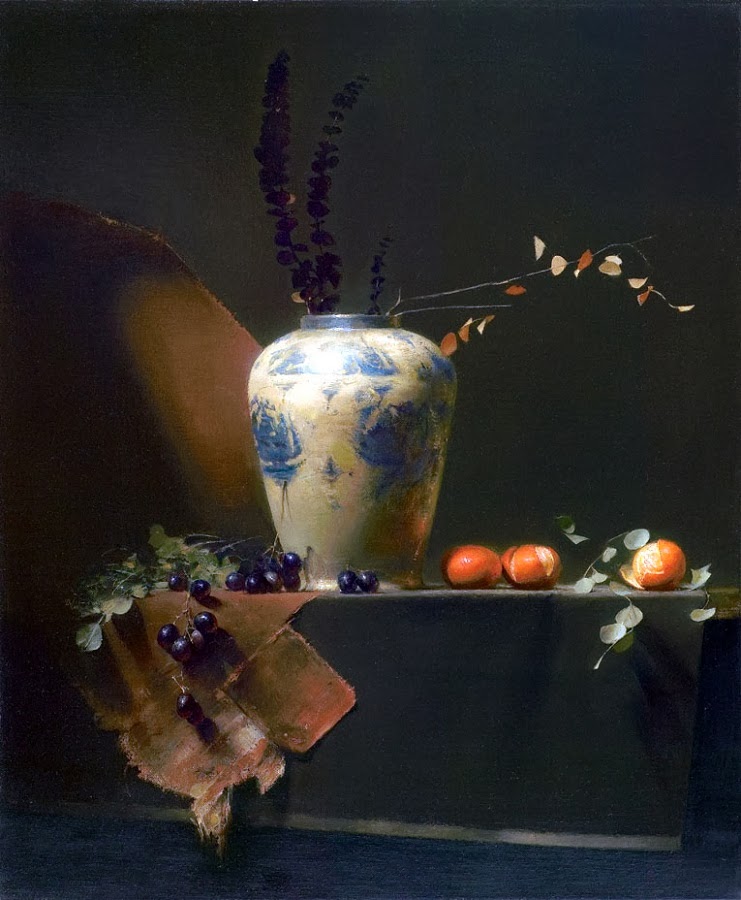 Love For Three Oranges
From aaronoz.com

David A. Leffel is a twentieth-century artist who paints in the classic Flemish/Dutch old master style, much in the manner of Rembrandt or Chardin. His subject matter is still-lifes, landscapes, portraits and figures, but the real subject of his work is how light affects everything, as it gently drifts from one object to another. Light is, in fact, what Leffel calls "the concept" of the painting.
For David, beauty is absolute, perfect and universal. He believes the goal of the artist is to understand beauty and to translate its essence upon the canvas. His art reflects this constant striving to expand this understanding, and, his artistic application of the knowledge. Since beauty is absolute, and not relative to the artist, art is therefore timeless. Although the art of Leffel is reminiscent of the Dutch Baroque painters, he is a master of light and shadow. When Leffel paints, even the simplest still lifes are dramatic, and fill the observer with a profound sense of awe. Viewers must appreciate the art of David A. Leffel on its own terms, and not try to apply stylistic associations to his work. The beauty Leffel conveys on canvas testifies to his understanding and talent.
(frankmkamer.com)

David Leffel’s works have been exhibited in major museums and private collections, and he has received three gold medals at the National Academy of Western Art, as well as a gold medal from the Hudson Valley Art Association and Allied Artists of America. He has also been featured in a number of publications including American Artist Magazine, Artists of the Rockies and the Golden West, Southwest Art, American Artists of Renown, and American Society of Portrait Artists. An instructional painting book on Leffel’s teachings was written by Linda Cateura, Oil Painting Secrets from a Master (Watson Guptill, 1984). It continues to instruct new generations of painters. Internationally recognized as a “20th Century Old Master,” David Leffel illuminates his paintings with a light that seems to fall from deepest memory.
Yet while the figures of 17th Century Dutch Masters—most notably Rembrandt—cast powerful shadows on Leffel’s work, it is not only the shades of history, but the artist’s immediacy, that awaken us to brilliance. Perhaps in this way more than any other, David Leffel proves himself a true master of chiaroscuro—not only with shadow and light, but with past and present. In An Artist Teaches: Reflections on the Art of Painting, we discover the revolutionary approach that Leffel brings to the classical tradition of painting.
(brightlightpublishing.com) 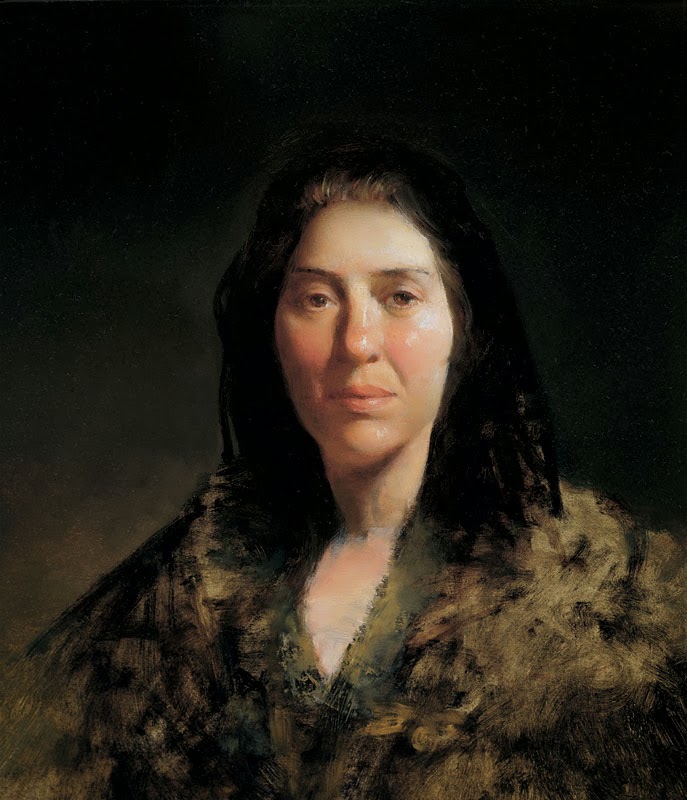 Although he concentrates much of his efforts on still life and portraits, since his move to New Mexico in 1992, Leffel has done more landscape paintings with strong skies, dark clouds, and a magnificent shaft of light. For the self-described light and shadow painter, the canvas presents the challenge to create "beauty and simplicity through colors, textures, shapes, lights, and darks, as they are the tools of the artist. If he can see…"
(whistlepik.com)