TORNADOES, TWISTERS AND A JERK IN A ROAD

For three years John Brosio accompanied storm chasers in the Midwest, gathering actual sensory information and taking enough photographs to fuel his decades-long relationship with the All-American twister. His early tornado paintings almost seem a pretense for his unabashed love of surface and intense color.
In “Edge Of Town” Brosio paints an eerily deserted street in the kind of small town where nothing ever happens--except very, very bad weather. One silhouetted, seemingly unconcerned pedestrian crosses the street nonchalantly unaware, or perhaps in denial, of the black, snake-like cloud of destruction inexorably approaching. The palpable and strange disconnect between the ominous impending twister and almost certain devastation in its path, contrasted with the calm of the pedestrian, begs a question: Is it human proclivity to ignore what we cannot control? Is it a paralysis of helplessness that leads us to pretend that our houses will protect us against flood, earthquake, fires, volcano’s, and yes, tornados? Is it hubris that we continue to build on cliffs, in canyons, on riverbanks, in forests and at the feet of volcanoes, almost daring nature to dislodge us?
Brosio is a master of the frozen moment right before the dreadful is about to happen. We become a witness, but are just rubbernecking, powerless to affect the outcome. We are stuck in this dangerous, unpredictable netherland--a place of eerie unreality--like a bad dream. Not unlike Chauncey Gardiner, in the 1979 film “Being There,” we “like to watch.” Brosio’s works are an ode to the human capacity for self-deception and inaction.
(JOHN BROSIO by Nancy Kay Turner at artscenecal.com) 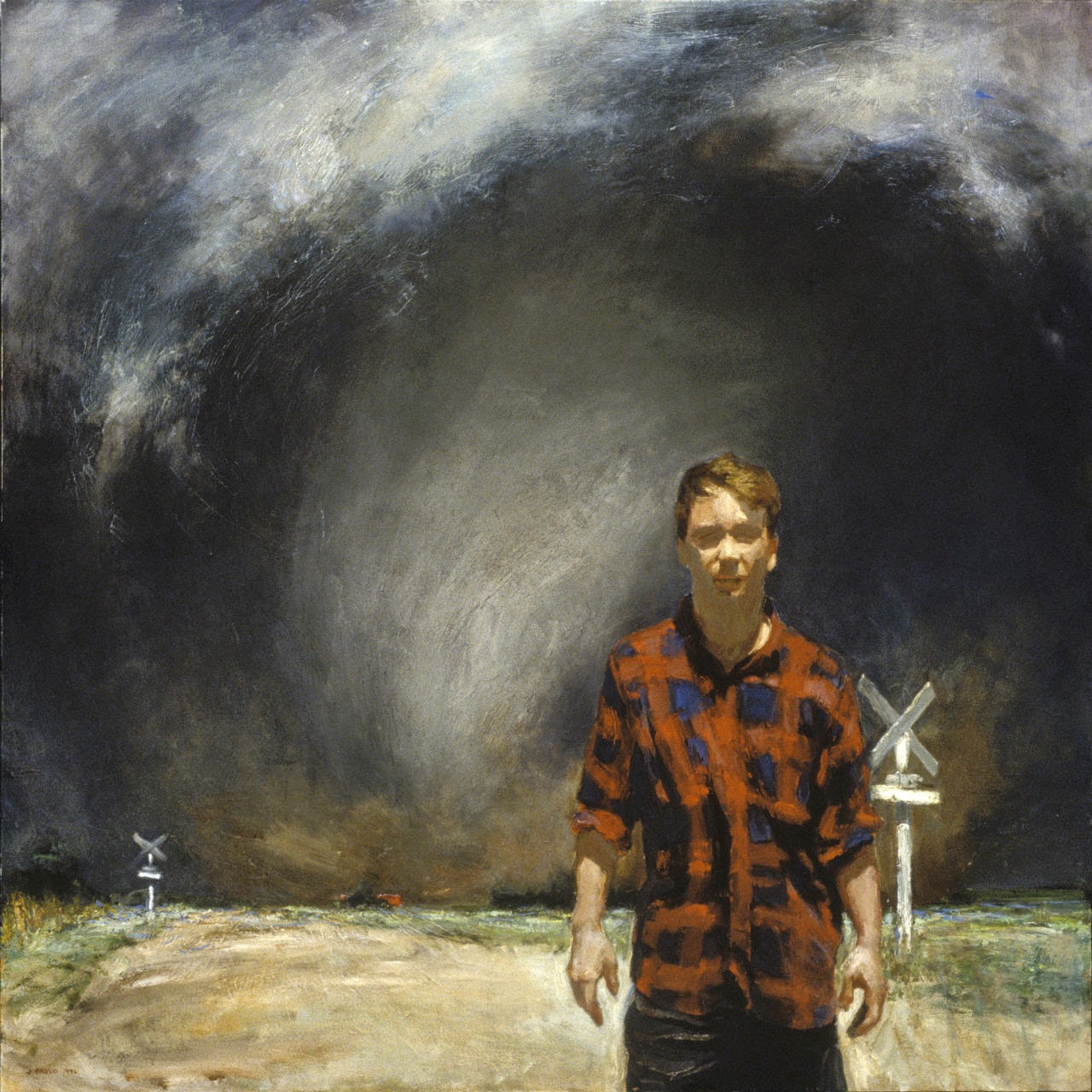 Harbinger (Self-Portrait)
From 444.hu John
Brosio was born in Pasadena, California and received a BFA from University of California at Davis. Earlier to that he attended Art Center College of Design in Pasadena.
The tornado in his work represents a perfect blend of mythology and science. He finds it easy to imagine it being alive and unpredictable, to view it as a god or agent thereof. One sees this mile high banshee choosing certain targets and skipping others like a jittery reaper.
Being witness to the birth, entire life, death, and interim behavior of a tornado was for Brosio witnessing a creature greater than human and hearing the footfall of a giant. And akin to a human, after all the wonder and speculation, it is returned to a mass of animated dust.
(artistaday.com) 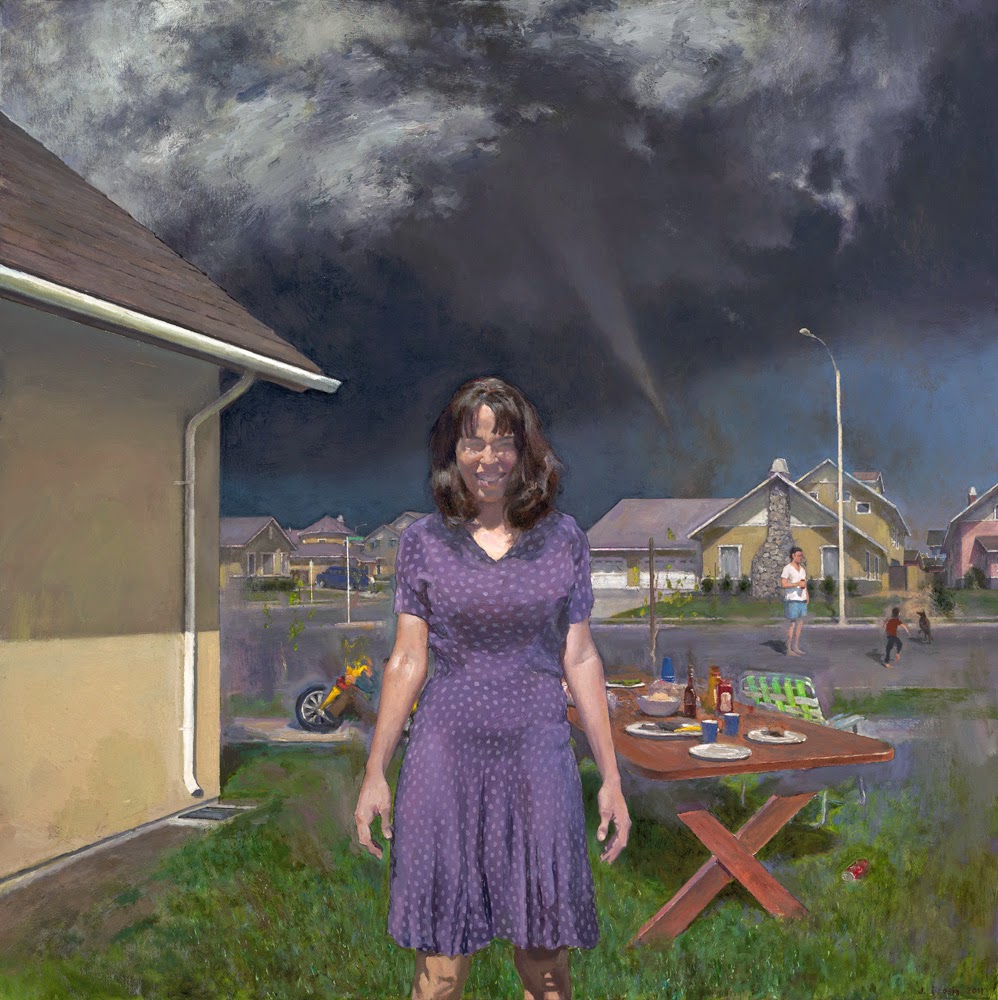 Queen of Suburbia
From portersquare.blogspot.com 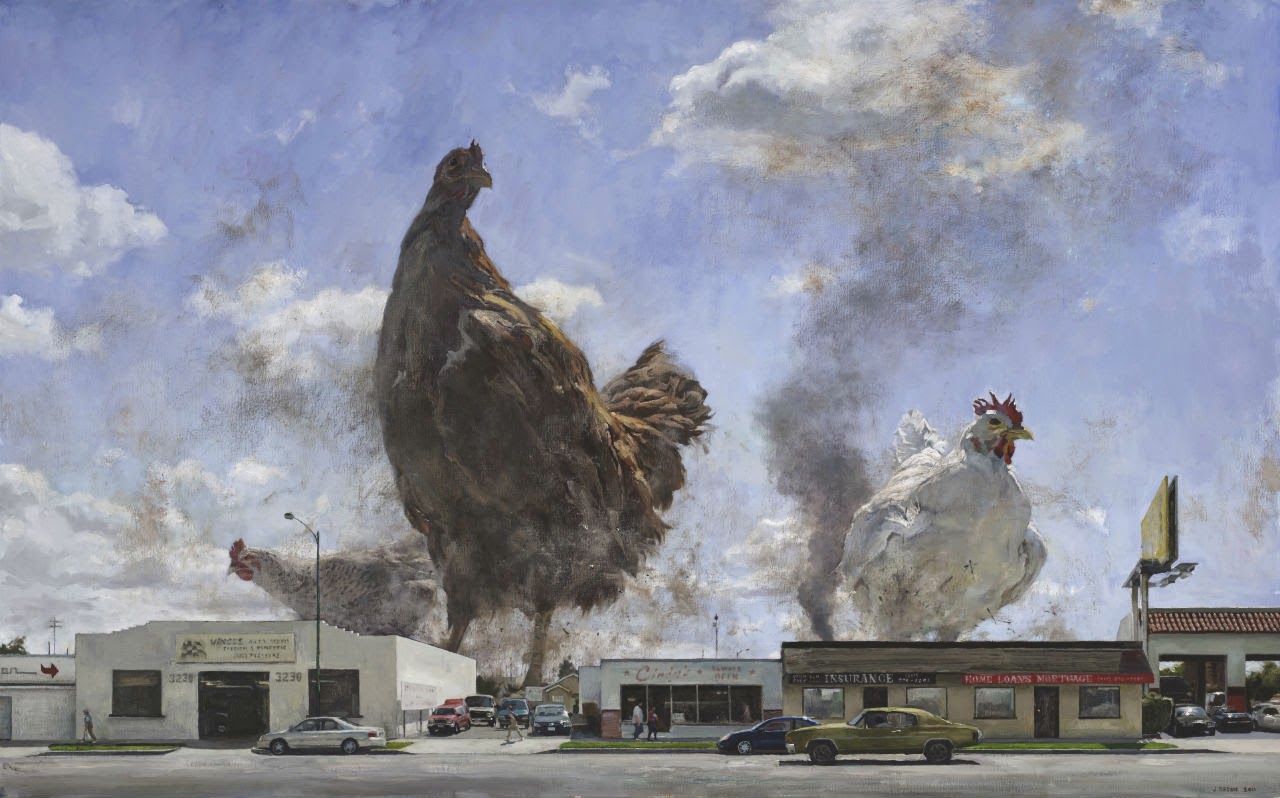 State of the Union Edge of Town
From 444.hu


Ripping through the American landscape genre in much the same way as the actual twisters that serve as the subject matter for these new works, John Brosio brings an innovative sense of drama and tension to a traditional style of depicting scenes from nature.
“For me the tornado represents a perfect blend of mythology and science,” says Brosio. “It is easy to imagine it alive and unpredictable, to view it as a god or agent thereof. One sees this mile-high banshee choosing certain targets and skipping others like a jittery reaper with sound and mannerisms so evocative of a living entity.
” Brosio’s handle on the twisters he depicts comes from a deep understanding of the subject gained from doing field research as an actual storm chaser and watching the ebb and flow of these destructive forces as they make their way across the American prairie.
“Witnessing its birth, entire life, death and interim behavior leaves me feeling privy to the life of an animal greater than us—the footfall of a giant,” says Brosio. “And, after all the wonder and speculation, it is in the end, like me, just a mass of animated dust.”
However, it’s not just the drama of the scenes that attracts Brosio to the subject matter. For him, the paintings still maintain a very high degree of technical possibilities that need to be understood to fully delve into these new works. “The inspiration for this particular set of twister paintings is derived from an exploration of the figure/ground relationship, a dynamic that pervades all art,” says Brosio. “In these images, moving almost 180 degrees from the more diorama-like depictions of American scenery, I looked to painters like Mark Rothko and Albert Pinkham Ryder. Prior to this point, the paintings were evocative of artists like Edward Hopper.”
(gcgallery.com) 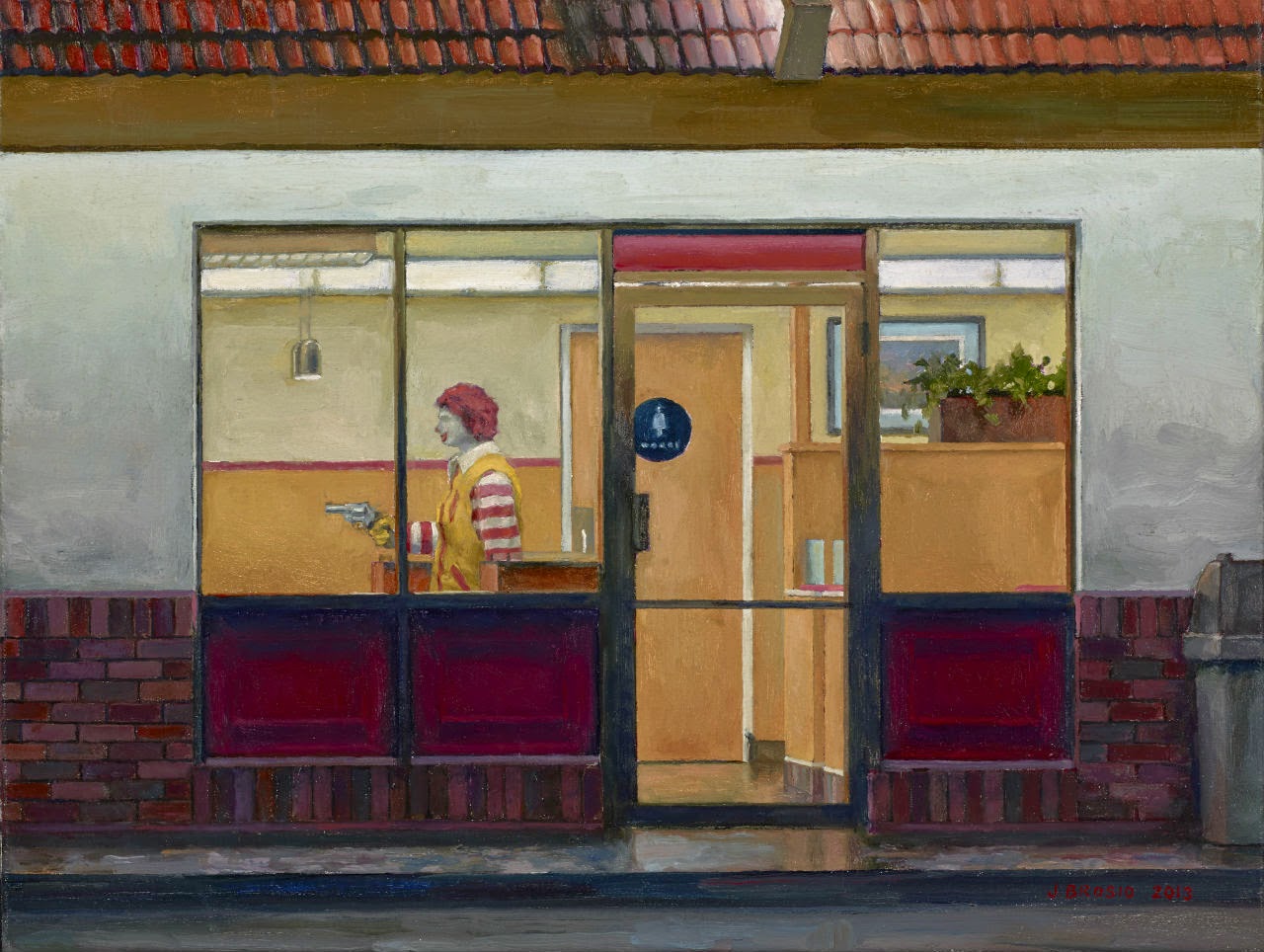 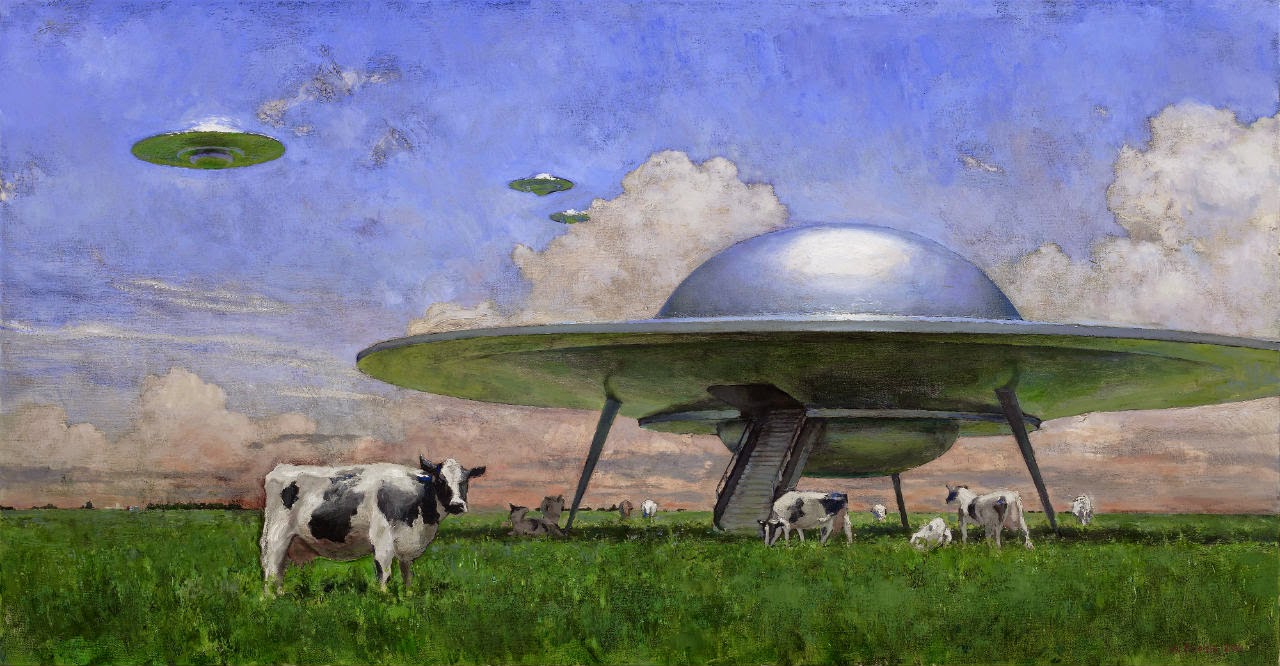 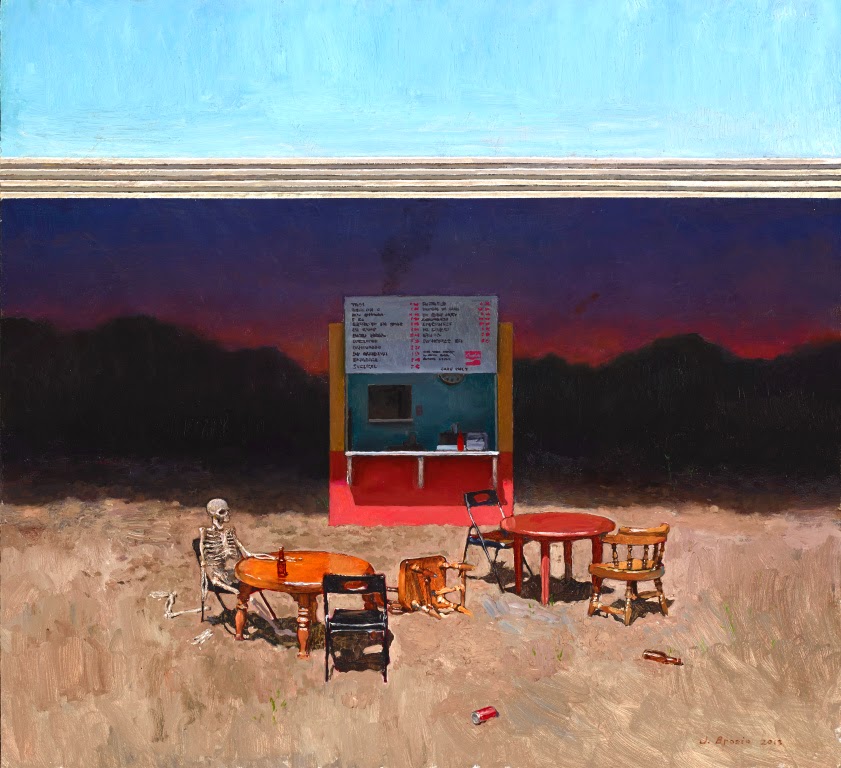 
When John Brosio wants to relax, he sometimes heads to a historic ocean liner called the Queen Mary and climbs aboard. These days the giant vessel is docked in Long Beach, CA, and has been transformed into a hotel with art deco appointments and remnants from the grand ship’s glory days. Yet it’s not the elaborate style that attracts Brosio rather, it’s the vessel’s sheer size. It’s 1,000 feet long and once carried more than 3,000 passengers and crew across the Atlantic Ocean. The Southern California painter enjoys the feeling of being dwarfed by something larger and more forceful than himself, he says. And that, in fact, is a central theme in his paintings.
The obvious question for viewers is, why tornadoes? On this particular day Brosio is ruminating on the question from a bench on Balboa Island and sipping a cup of steaming coffee. It’s dusk, and across a narrow waterway an old-fashioned Ferris wheel spins on nearby Balboa Peninsula. The carnival ride looms large on the landscape and looks very much like the one depicted in Brosio’s painting Rides except that today there is no ominous black plume lurking in the background.
For Brosio the experience of being dwarfed by a tornado is an exhilarating one, he says in an effort to explain his attraction to storms. “Witnessing a tornado’s birth, behavior, and death leaves me feeling privy to the life of an animal greater than us—it’s the footfall of a giant,” he says.
Today he continues to paint twisters in his Los Angeles area studio, but he is also percolating ideas related to mythology, another of his passions. He says these future works will be inspired by Virgil’s Aeneid, which he read in high school and can’t forget. “But I don’t see tornadoes stopping. Although I may take a break,” he says. “I have been into rattlesnakes lately they’re so gorgeous and dangerous.”
Brosio is represented by Tirage Gallery, Pasadena, CA; Arcadia Gallery, New York, NY; and Diane Nelson Fine Art, Laguna Beach, CA. (John Brosio, A Terrible Beauty by Bonnie Gangelhoff at southwestart.com, Featured in January 2003)
Posted by BEAUTIFUL PAINTINGS at 11:41 AM No comments:

Walter Elmer Schofield was a landscape painter associated with the Pennsylvania impressionists. Known for his virile, or vigorously masculine, style of painting, Schofield specialized in snow scenes, painted in Bucks County and other locales in the Delaware River Valley, as well as marine landscapes often painted in Cornwall, England. A strapping outdoorsman who stood 6'4", Schofield generally painted outdoors, en plein air, savoring even the bitterest winter weather.
Although Schofield's early landscapes were soft and romantic, featuring muted greens, grays, and browns in a tonalist manner, his mature work was characterized by bold realism and impressionism. These paintings are vibrant, exulting in the energy of coursing, frosty streams, while showing bold colors, and broad, thick, heavy brushstrokes. Schofield divided his time between the United States, where he was based in the Philadelphia area, and Cornwall, in England, where his wife Muriel and their children resided. Schofield descended from an illustriously creative family; his mother, Mary Wollstonecraft Schofield, was the grand-niece of Mary Wollstonecraft Shelley, the author of Frankenstein.
( The James A. Michener Art Museum)

Trained at the Pennsylvania Academy of Fine Arts in Philadelphia, PA from 1889 to 1892, Schofield studied with Thomas Anshutz, the famous student of Thomas Eakins. Schofield became associated with the circle of the American realists including artists such as Edward Redfield, Everett Shinn, Robert Henri, George Luks, and others. Additionally, Schofield attended the weekly meetings of the Robert Henri studio as well as studied abroad.
Schofield studied art at the Academie Julian in Paris and later, after marrying his British born wife Muriel Redmayne, settled in the artist colony of St. Ives, Cornwall, England. This art colony was known for following the tradition of plein aire landscape painting. Schofield produced American landscape paintings in and around New Hope, PA and he was acquainted with the members of the New Hope artist colony. His most well known American landscape paintings are those which were produced in the region of the Delaware River and Canal from circa 1925 to 1940.
His best known English landscape paintings were produced from about 1901 to 1940.
(drloriv.com) 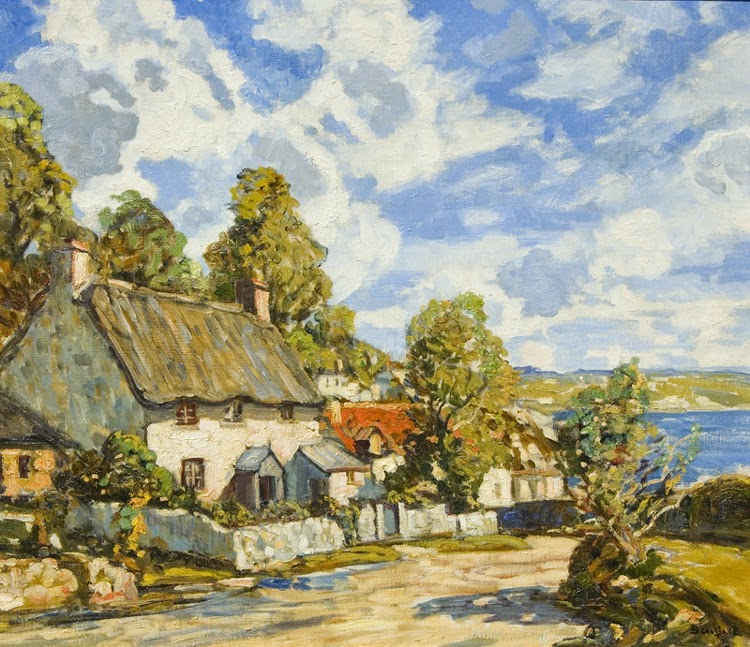 The Clearing Storm
From ajkollar.com 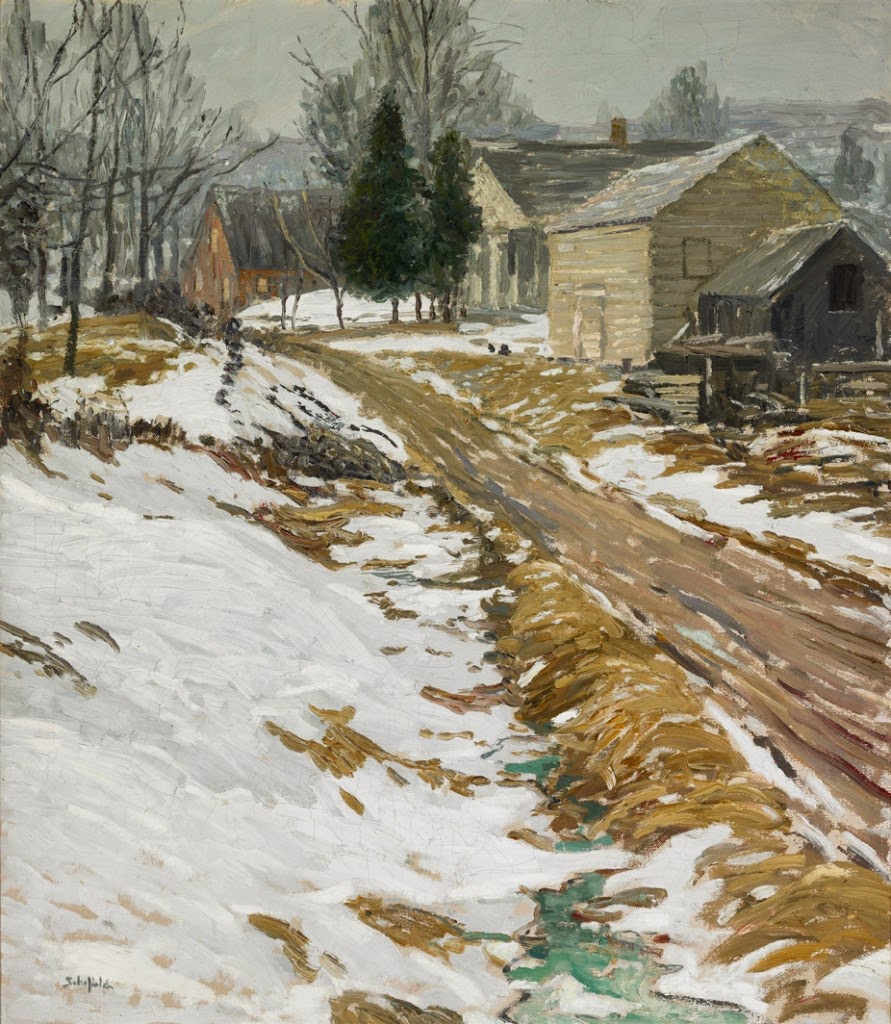 Schofield won many awards during his lifetime, including two gold medals from the Pennsylvania Academy of the Fine Arts, three awards from the National Academy of Design, and the National Arts Club among many others.
His work is in the permanent collections of some of the worlds most prestigious institutions including the Metropolitan Museum of Art, Corcoran Gallery of Art, the Pennsylvania Academy of the Fine Arts, the Luxembourg Museum in Paris, James A. Michener Art Museum and the National Museum of American Art at the Smithsonian Institute, among others. (gratzgallery.com)
Posted by BEAUTIFUL PAINTINGS at 11:04 PM No comments: