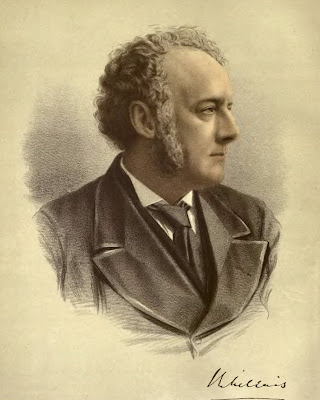 Self portrait
From Wikipedia, the free encyclopedia 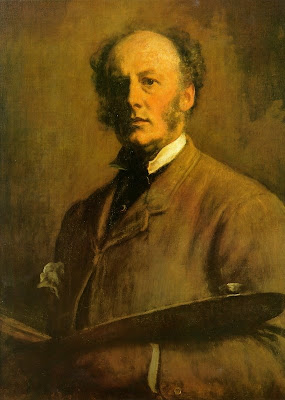 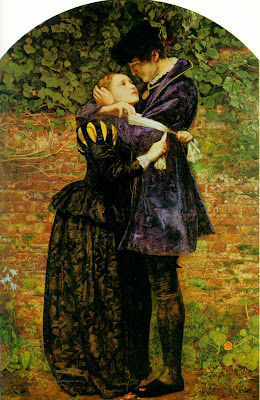 A Huguenot (1852)
From Wikipedia, the free encyclopedia

"Glory is in love with him" - wrote contemporaries about John Everett Millais. Neither English artists was so succeeded during his life, but he. Whether he was in Pre-Raphaelites' rows or drew sentimental genre pictures or representative portraits the crowd followed him. But it was he, who was called "Fallen Angel of Arts", and there is no analogy of this fall in the history of arts.
He was born in Jersey in very careful prosperous family of saddlers (they were distant relatives of Francois Millais). He was handsome and gifted boy. After the brief period at the Henry Sass's private art school, he was accepted into the of Royal Academy Schools, its youngest-ever student (he was 11). In 1846 he made his debut at the Royal Academy exhibition with the history paiting " Pizzaro Seizing the Inca of Peru", London, Victoria & Albert Museum) and won the golden medal in 1847 for the " Tribe of Benjamin Seizing the Daughters of Shiloh" ( London, Private coll.). Being a student he became friendly with his fellow student William Holman Hunt, who in his turn introduced Dante Gabriel Rossetti. In 1848 they founded the " Pre-Raphaelite Brotherhood".
(From libfl.ru/pre-raph/Millais)
Millais achieved popular success with A Huguenot (1852), which depicts a young couple about to be separated because of religious conflicts. He repeated this theme in many later works.
All these early works were painted with great attention to detail, often concentrating on the beauty and complexity of the natural world. In paintings such as Ophelia (1852) Millais created dense and elaborate pictorial surfaces based on the integration of naturalistic elements. This approach has been described as a kind of "pictorial eco-system". 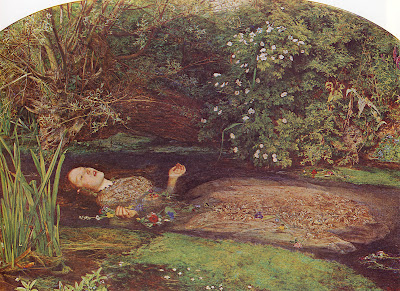 Ophelia (1852)
From Wikipedia, the free encyclopedia

Ophelia was part of the original Henry Tate Gift in 1894 and remains one of the most popular Pre-Raphaelite works in the Tate's collection. Shakespeare was a frequent source of inspiration for Victorian painters. Millais's image of the tragic death of Ophelia, as she falls into the stream and drowns, is one of the best-known illustrations from Shakespeare's play Hamlet.
John Everett Millais, William Holman Hunt and Dante Gabriel Rossetti were the founding members of a group of artists called the Pre-Raphaelites formed in 1848. They rejected the art of the Renaissance in favour of art before Raphael, Michelangelo and Leonardo (15-16 centuries). The Pre-Raphaelites focused on serious and significant subjects and were best known for painting subjects from modern life and literature often using historical costumes. They painted directly from nature itself, as truthfully as possible and with incredible attention to detail. They were inspired by the advice of John Ruskin, the English critic and art theorist in Modern Painters (1843-60). He encouraged artists to 'go to Nature in all singleness of heart.rejecting nothing, selecting nothing, and scorning nothing.'
The Pre-Raphaelites developed techniques to exploit the luminosity of pure colour and define forms in their quest for achieving 'truth to nature'. They strongly believed that respectable divine art could only be achieved if the artist focused on the truth and what was real in the natural world.
(From tate.org.uk)
Millais' friendship with Ruskin introduced him to Ruskin's wife Effie. Soon after they met she modelled for his painting The Order of Release. 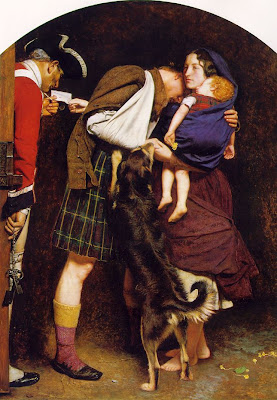 The Order of Release
1853
From Wikipedia, the free encyclopedia

As Millais painted Effie they fell in love. Despite having been married to Ruskin for several years, Effie was still a virgin. Her parents realized something was wrong and she filed for an annulment. In 1856, after her marriage to Ruskin was annulled, Effie and John Millais married. He and Effie eventually had eight children including John Guille Millais, a notable naturalist and wildlife artist. 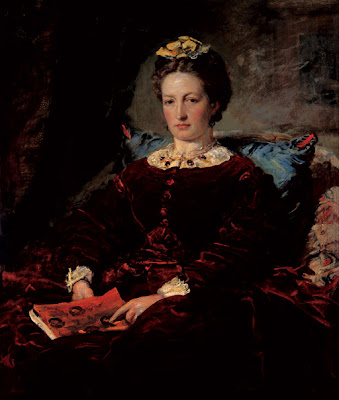 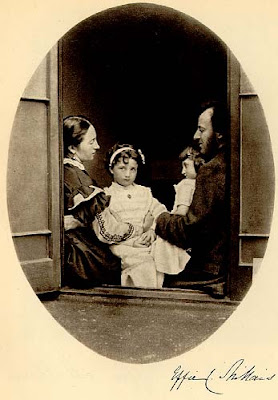 After his marriage, Millais began to paint in a broader style, which was condemned by Ruskin as "a catastrophe". It has been argued that this change of style resulted from Millais' need to increase his output to support his growing family. Unsympathetic critics such as William Morris accused him of "selling out" to achieve popularity and wealth. His admirers, in contrast, pointed to the artist's connections with Whistler and Albert Moore, and influence on John Singer Sargent. Millais himself argued that as he grew more confident as an artist, he could paint with greater boldness. In his article "Thoughts on our art of Today" (1888) he recommended Velázquez and Rembrandt as models for artists to follow.
Later works, from the 1870s onwards demonstrate Millais' reverence for old masters such as Joshua Reynolds and Velázquez. Many of these paintings were of an historical theme and were further examples of Millais' talent. Notable among these are The Two Princes Edward and Richard in the Tower (1878) depicting the Princes in the Tower, The Northwest Passage (1874) and the Boyhood of Raleigh (1871). Such paintings indicate Millais' interest in subjects connected to Britain's history and expanding empire. Millais also achieved great popularity with his paintings of children, notably Bubbles (1886) – famous, or perhaps notorious, for being used in the advertising of Pears soap – and Cherry Ripe. 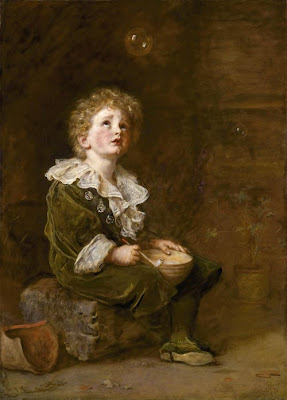 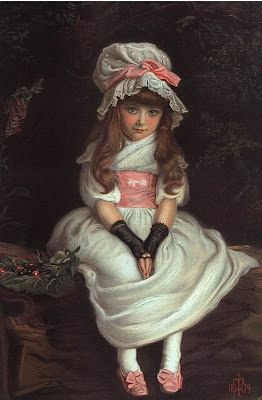 The Graphic's chromolithograph of Cherry Ripe
1879
From Wikipedia, the free encyclopedia

His last project (1896) was to be a painting entitled The Last Trek based on his illustration for his Son's book, depicted a white hunter lying dead in the African veldt, his body contemplated by two indifferent Africans. 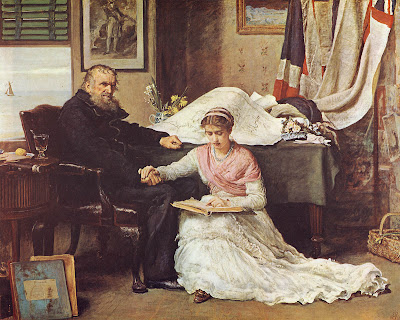 Such paintings indicate Millais' interest in subjects connected to Britain's history and expanding empire. Millais also achieved great popularity with his paintings of children, notably Bubbles (1886) – famous, or perhaps notorious, for being used in the advertising of Pears soap – and Cherry Ripe.His last project (1896) was to be a painting entitled The Last Trek based on his illustration for his Son's book, depicted a white hunter lying dead in the African veldt, his body contemplated by two indifferent Africans.
Millias was elected as an associate member of the Royal Academy of Arts in 1853, and was soon elected as a full member of the Academy, in which he was a prominent and active participant. He was granted a baronetcy in 1885, the first artist to be honoured with a hereditary title. After the death of Frederic Leighton in 1896, Millais was elected President of the Royal Academy, but he died later in the same year from throat cancer.

-Text from Wikipedia, the free encyclopedia, unless otherwise stated.

Posted by BEAUTIFUL PAINTINGS at 11:39 PM