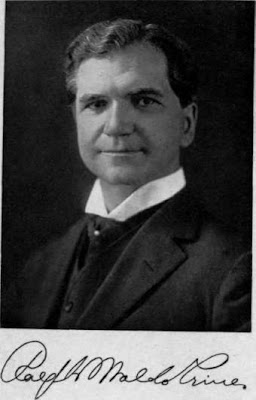 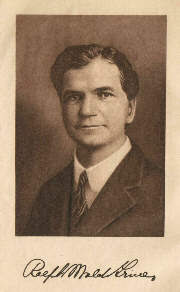 Ralph Waldo Trine was a philosopher, mystic, teacher and author of many books, and was one of the early mentors of the New Thought Movement. His writings had a great influence on many of his contemporaries including Ernest Holmes, founder of Religious Science. He was a true pioneer in the area of life-transforming thought. No other New Thought author has sold more books than he, his writings reaching far beyond New Thought circles out to the general public, which has bought and read Trine's books without ever knowing that they were New Thought.
Trine was born on 6th September, 1866, in Mount Morris, northern Illinois. He was educated at Carthage College Academy, Knox College, A.B. 1891; and studied at the University of Winsconsin and later at John Hopkins University in the fields of history and political science. He was much interested in social and economic problems, having won a $100 prize for an essay on "The Effects of Human Education on the Prevention of Crime." After spending some time as a graduate student at the latter University, Ralph was a special correspondent for The Boston Daily Evening Transcript. Whilst working in this capacity, he built himself a little cabin on the edge of a pine grove - testament to the peace and simplicity of the man. He married a graduate of the School of Expression (which became Curry College) who became Grace Hyde Trine, an author and poetess in her own right, and together they had a son, Robert. Trine lived for years at Mt. Airy, New York, and was deeply involved in the metaphysical seminars at Oscawana.
He began his writing career in his early 30s. He was much influenced by the writings of Fitche, Emerson and the Scottish scientist, Henry Drummond, his "What All the World's A-Seeking" expanding on a number of the themes covered in Drummond's inspirational classic, "The Greatest Thing in the World." His remarkable seminal book, "In Tune with the Infinite" was launched in 1897 and went on to sell over 2 million copies, and has stood the test of time for over a century. It was read by such luminaries as Queen Victoria, Janet Gaynor and Henry Ford. It is interesting that Henry Ford, pioneer of mass produced automobiles, attributed his success directly to having read "In Tune with the Infinite." After reading the book, Ford ordered it on mass, and distributed copies freely to high profile industrialists. It's a true mark of how powerful the book was and still is!
From New Thought Library 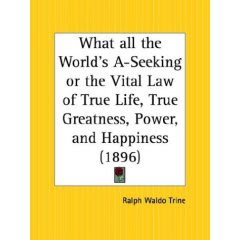 Posted by BEAUTIFUL PAINTINGS at 12:26 PM