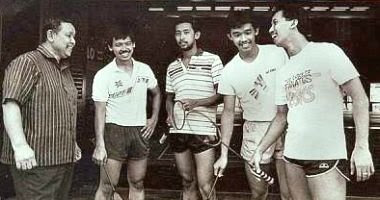 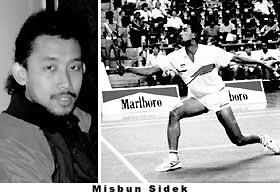 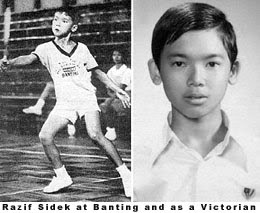 Younger days...
All Images from The V.I. Image Gallery

The father of Malaysia’s most famous badminton-playing family, Datuk Sidek Abdullah Kamar, passed away on Oct 16, 2005 after a long battle against illness. He left behind wife Bangaton Rasman, six sons (Misbun, Razif, Jalani, Rahman, Rashid and Mohd Shahrezan), two daughters (Rozhita and Zamaliah) and 19 grandchildren. All his children except for Mohd Sharezan and Rozhita had donned national colours.
It was his sons who played the biggest roles to take Malaysia out of the doldrums in world badminton, culminating in the success to regain the Thomas Cup after a lapse of 25 years in 1992. Sidek is no more but his legacy will live on for a long time. 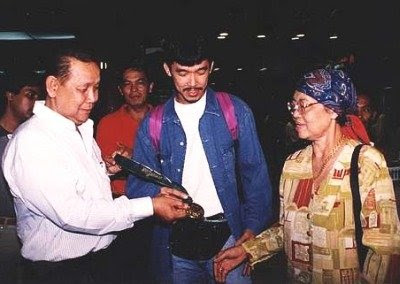 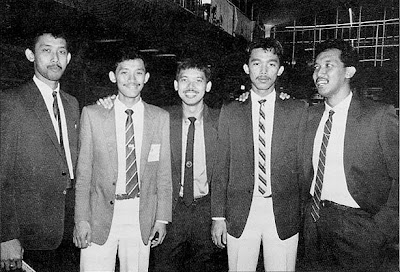 The Sidek Brothers dominated the national badminton scene in the eighties and nineties and won many international titles as well. Misbun was the Swedish Open Champion and beat the formidable Liem Swie King at the Jakarta SEA Games. Razif and Jalani won the 1982 All-England Doubles crown. All except Rahman, who was a reserve, played for Malaysia in the Thomas Cup tournament
(The V.I. Image Gallery) 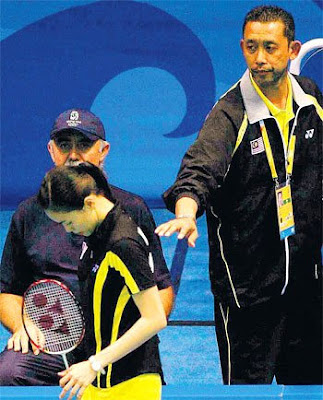 Mohamed Razif Mohamad Sidek (Nickname: Ajib) was born May 29, 1962 in Banting, Selangor. He is the second younger brother after Misbun who has also involved in badminton. He reached the All England semi-final, with his younger brother, Jalani, in 1980, at the age 17. He won All England Championship title in 1982 with Jalani after beating the Scottish pairs, Billy Gilliland and Dan Travers at that time. During his career with Jalani, they won several titles from local championship and also all over the world.
He was a member of the squad to bring back Thomas Cup for Malaysia after 25 years, a 3-2 victory over Indonesia at National Stadium in 1992. He created history for Malaysia by becoming the first athlete to have won a medal in Olympic Games which was held in Barcelona in 1992. They won the bronze medal for Malaysia after reaching the semi-final, but lost to a Korean pair, Park Joo-Bong and Kim Moon-Soo. (NationMaster.com 2003-5)

Abdul Rashid Mohamed Sidek (Nickname: Adul) was born on July 8, 1968 in Kanchong Darat, Banting, Selangor was a prominent world-class single player in the 1990s. He is the youngest of the five Sidek Brothers. He and his siblings were all actively involved in the national badminton scene. He became the youngest player to win the National Junior Badminton Championship in 1980 at the age of 12. He won the bronze medal in badminton for men's singles at the 1996 Summer Olympics held in Atlanta after beating the reigning World Champion from Indonesia, Heryanto Arbi. He became the world number one player for the first time in 1997. He currently serves as coach to the back-up players in the Malaysian national badminton team.
(From Wikipedia, the free encyclopedia)

1976 was the year the first of the five Sidek brothers, Mohd. Razif bin Haji Sidek, joined VICTORIA INSTITUTION (V.I) in Kuala Lumpur. The brothers’ story ends, of course, with the famous 1992 Thomas Cup victory. Over the next few years, talent smothered the V.I. badminton courts, talent that would be translated into household names a few years down the line. The onslaught for the 1992 Thomas Cup had started when fourteen-year-old Razif Sidek arrived in 1976 - thanks to Teng Yuen’s efforts - from the Banting Primary School. Razif was put up in the home of Aziz Bokhari, the Secretary General of the BAM, while he attended the V.I. The same year, Kuah Huat Poh, arrived from Teng Yuen's old school in Kuala Selangor. A little later, Razif’s brothers Jalani and Misbun joined Form 1 and Form 4, respectively, in the V.I. (They stayed at the VI hostel.) Then another brother, Rahman, became the next Sidek to walk through the portals of the V.I. into Form 1 and eventually Rashid made the pilgrimage from Banting to complete the V.I. Sidek Five.
Playing for the V.I., young Razif built up an impressive scalp collection from the M.S.S.M. and Dewan Bandaraya championships, while Jalani became the under-15 singles champion in the M.S.S.M. in 1977 and big brother Misbun cornered the under-18 national singles title. (The latter repeated the feat the following year.) By 1979 Misbun was already good enough to be included in the national Thomas Cup squad (it failed to make it to the finals). That same year, Jalani was national under-18 singles and doubles champion and was named Selangor schoolboy athlete of the year. Jalani also participated in the ASEAN schools championship in Jakarta and in internationals against Indonesia and India.
As the eighties rolled in, Misbun became the 1980 under-20 M.S.S.M. champion with Huat Poh as the runner-up. The two partnered each other to win the under-20 doubles championship as well. Jalani and Misbun also achieved successes on the Benson and Hedges national circuit. Jalani was tapped for the Thomas Cup squad and was sent for various championships in Europe to gain experience. Partnering Razif to form the youngest ever pair, he made it into the quarter-finals in the all-England doubles championship.
Misbun Sidek, at his peak as a player in the eighties, carved his name beyond the V.I. His achievements locally and overseas would fill a small book. To name a few: In 1979, at the SEA Games in Manila, playing in the team event, he had the satisfaction of beating Indonesia’s Lim Swie King, the reigning world singles champion at that time. Misbun was national champion without a break from 1981 to 1986 and was selected for the Thomas Cup squads of 1981 and 1985 which were unsuccessful in their bid to bring back the Trophy. In 1981 Misbun won a gold for Malaysia in SEA Games. Over a span of seven years he won the open championships in Sweden, Canada and Taiwan and was runner-up in the World open championship (1982), All-England open championships (1986), China open championship (1986), and World Grand Prix championship (1988).
The other Victorians, too, were cutting their badminton teeth after leaving the V.I. In 1982, Razif, pairing with Jalani, bagged the doubles gold at the All-England championship and the 1982 Commonwealth Games in Brisbane.
The Sidek brothers were a dedicated yet humble lot, the result of the right values and attitudes drummed in by their father. Even when competition training coincided with their Hari Raya break, they would be back in their Banting home town to visit relatives by day, and by the evening they would be back in Kuala Lumpur for their workouts. Even while watching TV, they would be exercising with light weights or be kneading hard rubber balls in their hands to strengthen their racket grip. When they were hungry, the brothers would walk to the Jalan Campbell stalls to snack on some humble noodles. No fancy restaurants for them.
The moment of truth arrived in 1992. For the six Victorians on the Thomas Cup Squad, all the school, state and national championships fought and won in the years prior to this were merely milestones on the long road to this final destination. The Malaysian Thomas Cup squad stormed its way into the finals to meet Indonesia on May 16 in the supercharged atmosphere of the National Stadium. First, Rashid Sidek beat Ardy Wiranata; then Razif and Jalani lost to Eddy Hartono and Gunawan in three sets, tying the two countries 1-1. Next, Foo Kok Keong beat Alan Budi Kesuma in straight sets and when Soo Beng Kiang partnered Cheah Soon Kit to overcome Rexy Mainaky and Ricky Subagja, the Thomas Cup was back in Malaysia again. (It didn’t matter that Kwan Yoke Meng lost to Joko Suprianto in the fifth match). The whole nation (and their old School) swooned with joy and worshipped their heroes.
(Chung Chee Min at The V.I. Web Page) 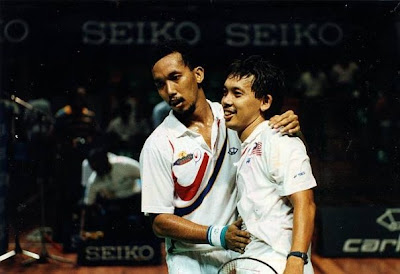 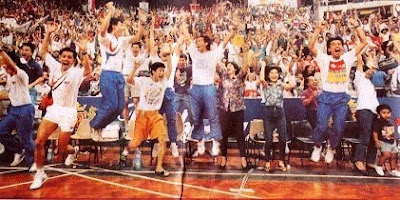 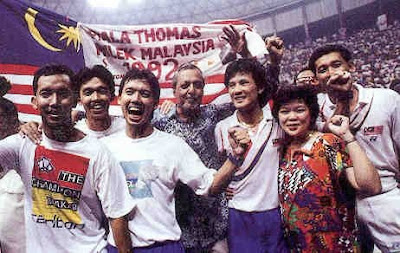 Posted by BEAUTIFUL PAINTINGS at 3:44 PM