THE MOST ACCLAIMED AMERICAN ARTIST OF HIS GENERATION 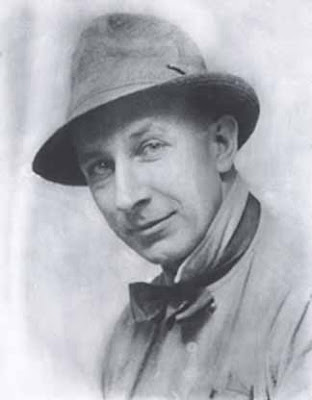 George Wesley Bellows
From americanart.si.edu
George Wesley Bellows (August 12 or August 19, 1882 - January 8, 1925) was an American realist painter, known for his bold depictions of urban life in New York City, becoming, according to the Columbus Museum of Art, "the most acclaimed American artist of his generation".
(WIKIPEDIA)
Bellows grew up in Columbus, Ohio, the son of a devout and solidly Republican building contractor. He always felt deeply ambivalent about his father, noting at the time of his death that, "He was a wonderfully fine man, yet being fifty-five when I appeared, his point of view, his character even, belonged to so remote a past that I look upon many of his ideas to this day with amazement and sorrow."
Teased as a sissy by his classmates, George Bellows quickly learned to defend himself with his fists, and compensated for his gangling awkwardness by becoming an outstanding athlete, particularly in baseball.
At Ohio State University, George Bellows proved a spirited extrovert, excelling in baseball as well as in the new sport of basketball, singing in theatricals, and producing drawings of Gibson-like girls for the university's magazine. Bellows's athletic prowess almost diverted him from a career in art, but in 1904 he decided to turn down a professional baseball contract and move to New York City to study painting.
(Dr. Henry Adams, Professor of American Art, Case Western Reserve University at georgebellows.com) 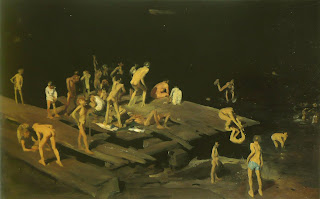 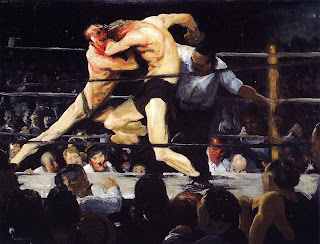 Stag at Sharkey’s
From artgalleryartist.com 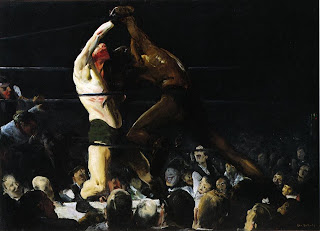 Both Members of This Club
Source the-athenaeum.org
From en.wikipedia.org
Bellows attended Ohio State University before moving in 1904 to New York City, where he studied at the New York School of Art under Robert Henri, leader of the group of American realist painters called The Eight. Bellows’s early works show the influence of Henri in their dark, tonal palette, vigorous brushwork, and urban subject matter; typical of this period is Forty-Two Kids (1907), a painting of slum children swimming and diving in the East River. Bellows’s dramatic, evocative paintings of prizefights, such as Stag at Sharkey’s and Both Members of This Club (both 1909), date from this period as well; they remain among his most famous works.
(Encyclopædia Britannica)
Although Bellows’ talents were diverse and not limited to sports-related art, his depictions of boxing matches are quite famous. Before 1910, boxing was illegal in New York but nonetheless attracted huge crowds at private matches. People from all walks of life would attend these fights, just like the fighters themselves were of various racial and ethnic groups.
In such paintings as Both Members of This Club, Bellows showed a fierce battle between two boxers along with the almost bloodthirsty eagerness of the spectators around them. Bellows was also merging classical methods with an excellent knowledge of human physiology to vividly capture the happenings of his own time.
(Artist George Wesley Bellows: Illustrator and Painter of Boxing Matches and American Scenes by Meg Nola at suite101.com)
Bellows' series of paintings portraying amateur boxing matches were arguably his signature contribution to art history. These paintings are characterized by dark atmospheres, through which the bright, roughly lain brushstrokes of the human figures vividly strike with a strong sense of motion and direction.
(WIKIPEDIA) 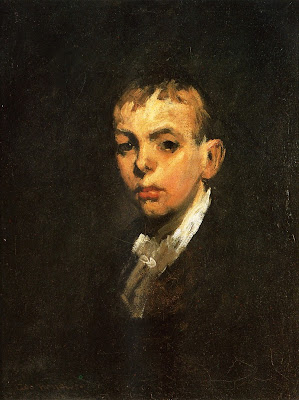 Head of a boy
Gray Boy
Oil on canvas, 1905
From boyarts.net
Bellows first achieved notice in 1908, when he and other pupils of Henri organized an exhibition of mostly urban studies. While many critics considered these to be crudely painted, others found them welcomely audacious and a step beyond the work of his teacher. Bellows taught at the Art Students League of New York in 1909, although he was more interested in pursuing a career as a painter. His fame grew as he contributed to other nationally recognized juried shows.

(WIKIPEDIA)
In 1909 Bellows was elected an associate member of the National Academy of Design; he gained full membership in 1913. From 1910 he taught at the Art Students League in New York. Between 1912 and 1917 he contributed illustrations to the socialist magazine The Masses.
(Encyclopædia Britannica) 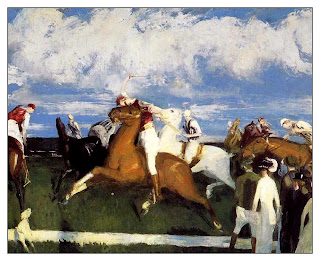 Polo, 1910
From istanbulsanatevi.com
Blue Snow the Battery, 1910
From Wikipedia 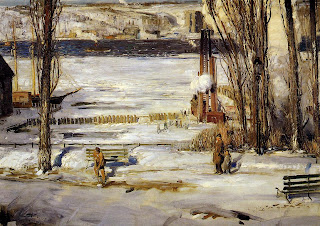 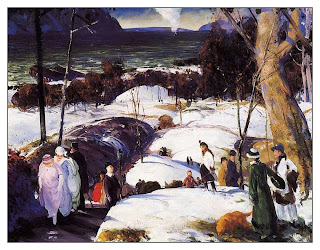 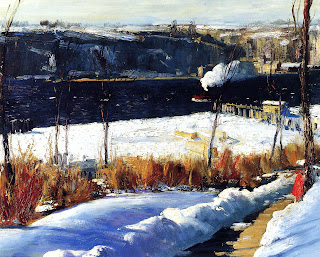 Winter Afternoon
Norton Museum of Art (United States)
From the-athenaeum.org
Bellows' urban New York scenes depicted the crudity and chaos of working-class people and neighborhoods, and also satirized the upper classes. From 1907 through 1915, he executed a series of paintings depicting New York City under snowfall. These paintings were the main testing ground in which Bellows developed his strong sense of light and visual texture. These exhibited a stark contrast between the blue and white expanses of snow and the rough and grimy surfaces of city structures, and created an aesthetically ironic image of the equally rough and grimy men struggling to clear away the nuisance of the pure snow.
(WIKIPEDIA) 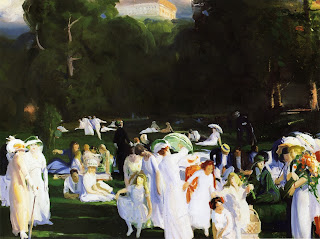 A Day in June
Painting - oil on canvas, 1913
Detroit Institute of the Arts (United States)
From the-athenaeum.org 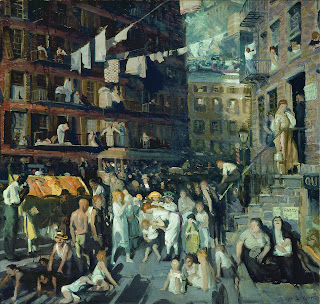 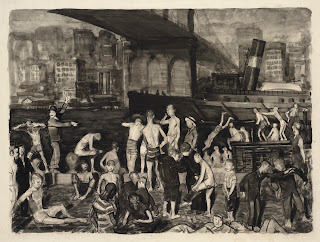 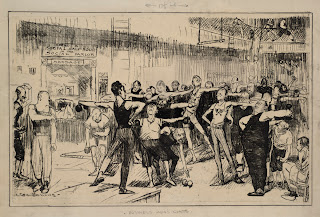 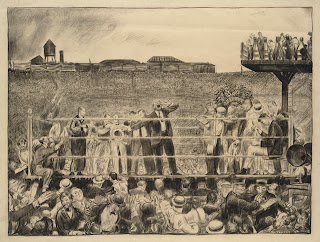 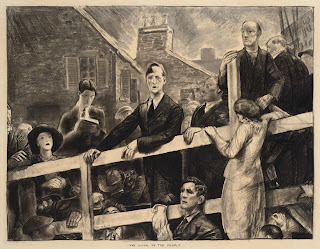 The Appeal to the People, 1923
Graphite, crayon, and chalk on card stock
Boston Public Library, Print Department
Boston Public Library at flickr.com
George Bellows was introduced to fine art lithography by Albert Sterner in 1916. George Bellows was a quick study and soon became the leading printmaker of the Ashcan school. As he became more proficient in lithography, George Bellows employed the services of master lithographic printers, George C. Miller and later, Bolton Brown. George Bellows' daughter Jean recalls that Bellows would work until dawn with his printers to achieve the desired pictorial effects, often destroying lithographs that did not meet his exacting standards.
Many drawings and lithographs were unsigned at the time of George Bellows death at age 43. At first the artist's widow, Emma S. Bellows, signed the remaining lifetime impressions of his works with the artist's name followed by her initials (ESB). After Emma Bellows' death, her daughter Jean Bellows Booth continued to sign these lifetime impressions of the original lithographs and drawings with the artist’s name followed by her initials (JBB)."
(georgebellows.com) 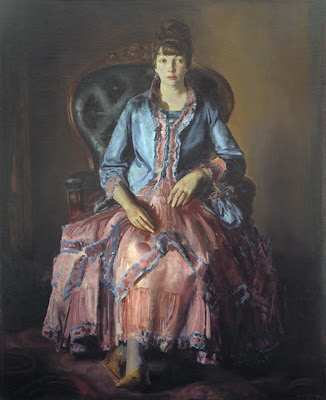 Emma in a Purple Dress, 1920-23
Dallas Museum of Art
From Wikipedia 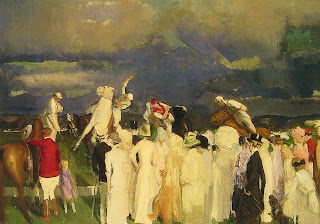 Polo Crowd (1910)
Oil on canvas
From ARC at artrenewal.org 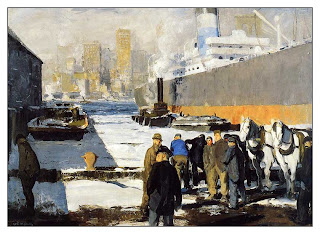 Men of the Docks
From istanbulsanatevi.com

In December 1999, Polo Crowd, a 1910 painting, sold for U.S. $27.5 million to billionaire Bill Gates. In November 2008, Bellows's Men of the Docks, a 1912 painting of the Brooklyn docks spanning the East River and depicting the Manhattan skyline in the background, was to be auctioned at Christie's in New York. It was expected to set the record for an American painting sold at auction with an estimate of $25–35 million. The painting's sale however was a source of controversy at Randolph College because it was the first masterpiece purchased for the Maier Museum of Art by students and locals who scraped together $2,500 to purchase it in 1920. Due to a series of lawsuits and the deflated art market; the painting remains unsold and in limbo.
(WIKIPEDIA)
Sadly, George Bellows died of appendicitis, at the height of his fame and artistic prowess, at the early age of forty-three. Later that year a great memorial exhibition of his work was held at the Metropolitan Museum of Art in New York. At the opening, Bellows' teacher, Robert Henri squired his widow, Emma, through the opening, and when it was over, he turned to her in tears. "I always gave him my most severe criticism," he commented, "because I thought he was my best pupil. Now I am sure of it."
(Dr. Henry Adams, Professor of American Art, Case Western Reserve University at georgebellows.com)
Posted by BEAUTIFUL PAINTINGS at 9:21 PM