ALLA PRIMA, EVERYTHING I KNOW ABOUT PAINTING 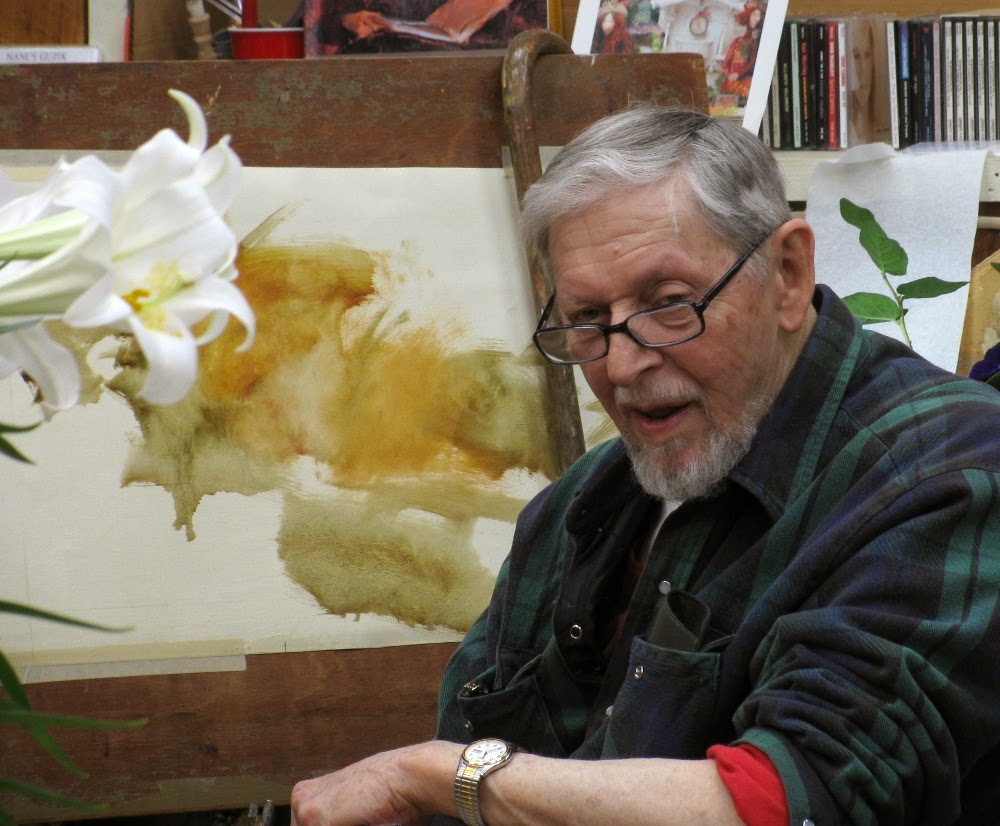 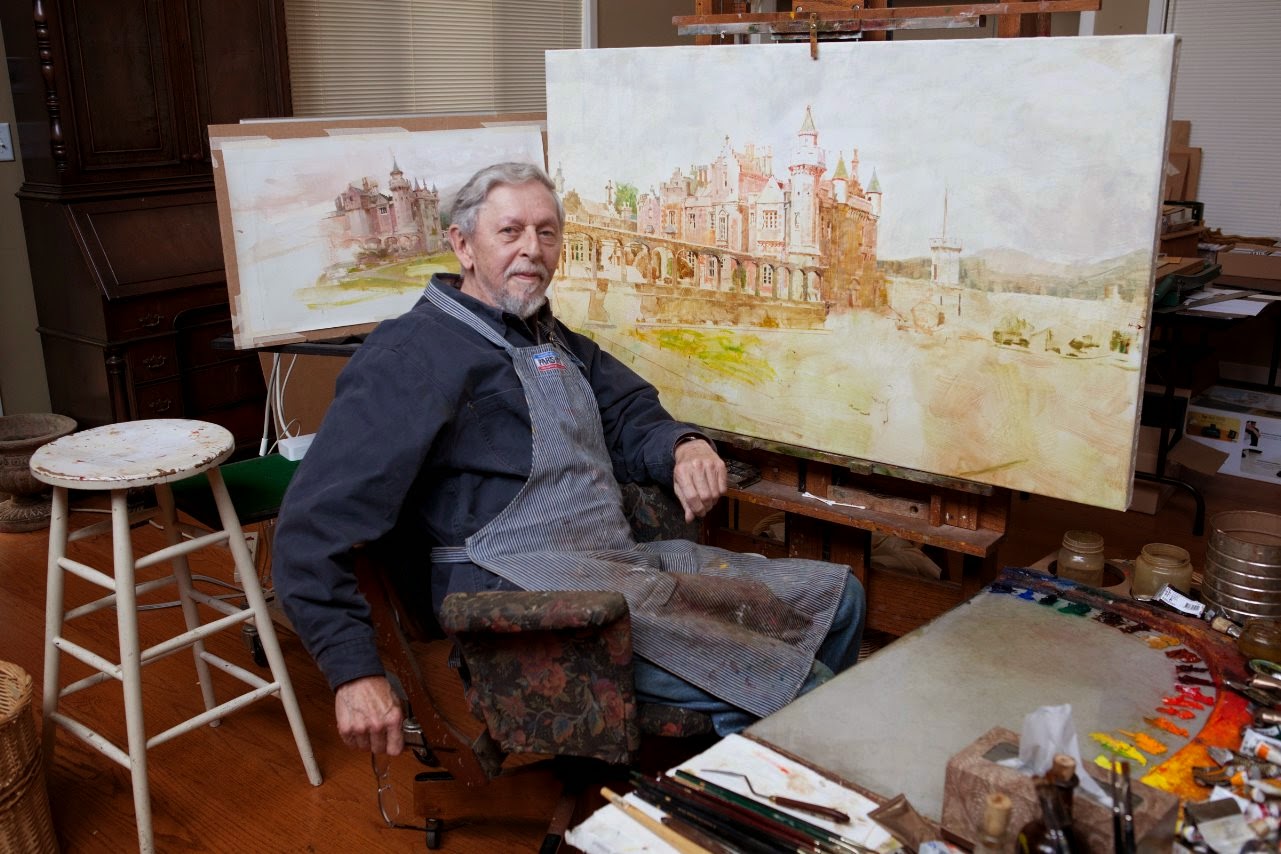 Richard Schmid in his studio
Abbotsford House, Scotland
From underpaintings.blogspot.com
Richard Schmid has promoted art education through his books, articles, workshops, seminars, and television presentations. He travels widely for his subjects, and currently lives in New Hampshire with his wife, the painter Nancy Guzik.
Richard holds a Doctorate in Fine Art and is a recipient of The John Singer Sargent Medal for Lifetime Achievement. Since the publication of his landmark book on landscape painting in 2009, Richard has been involved in two major projects. The first, in 2011, was a very large painting of Abbotsford House, the Manor home of Sir Walter Scott in Scotland, which won a viewing and praise from HRH Queen Elizabeth during grand re-openning ceremonies of the house and visitors center. The second project, begun in 2011, was the new expanded edition of Alla Prima, ALLA PRIMA II, completed in 2013, and now in its second printing. Additionally, exhibitions of Richard’s art were mounted at the National Academy of Science on Cape Cod, and Wellesley College in Boston. Throughout his distinguished career as a painter, author, and teacher, Richard Schmid has been a candid spokesman for what is known as the Grand Manner—a certain mingling of virtuosity and unrestrained joy in art.
(richardschmid.com) 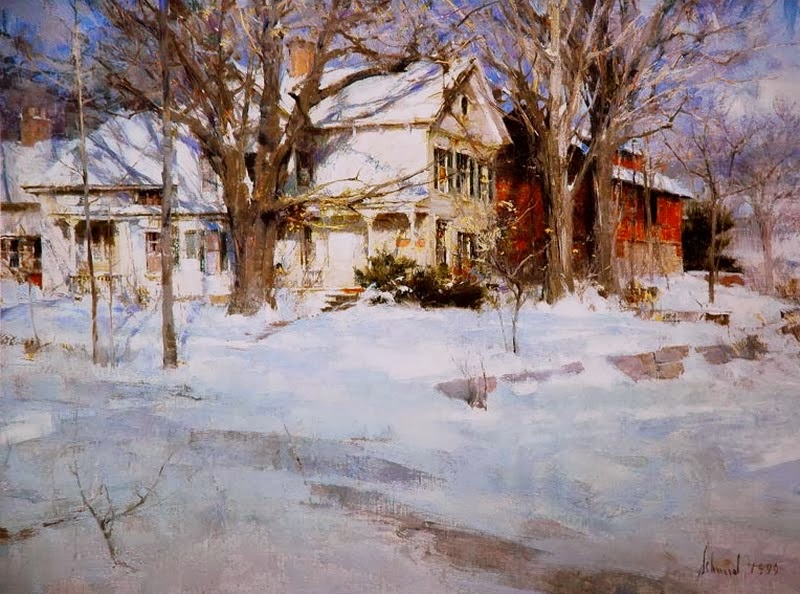 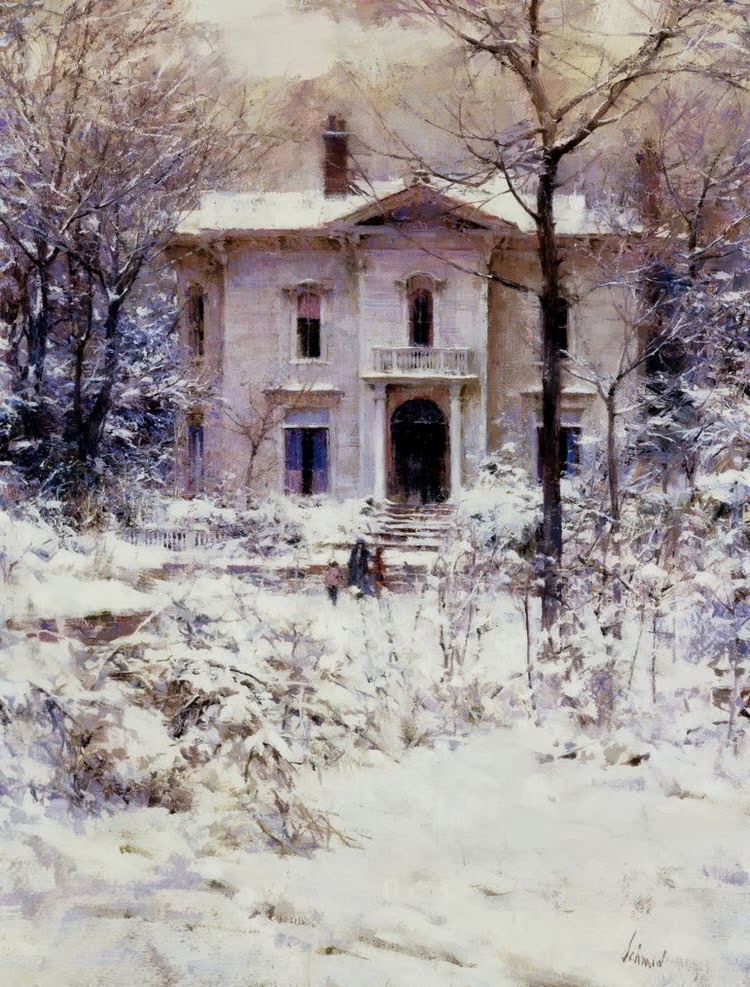 Victorian Winter
All images from tuttartpitturasculturapoesiamusica.com
In his book and videos, Schmid emphasizes some fundamentals that are often glossed over, but are worth being reminded of. One in particular is “doing the charts”; a process that young art students often think is onerous busywork, but seasoned painters know is as invaluable to a painter as practicing scales is to a musician. This is the process of painting your own color charts, in which you mix a value scale of each color, and then value scales of each color in combination with each of the other colors in your basic palette. It is a process that gives you more color mixing knowledge than a truckload of color mixing books and preprinted charts could ever begin to provide.
It is this kind of adherence to the time tested painting fundamentals, which work and have been successful for representational painters through history, which is the basis for both Schmid’s teaching and his beautifully economical and lyrically poetic paintings.
(linesandcolors.com) 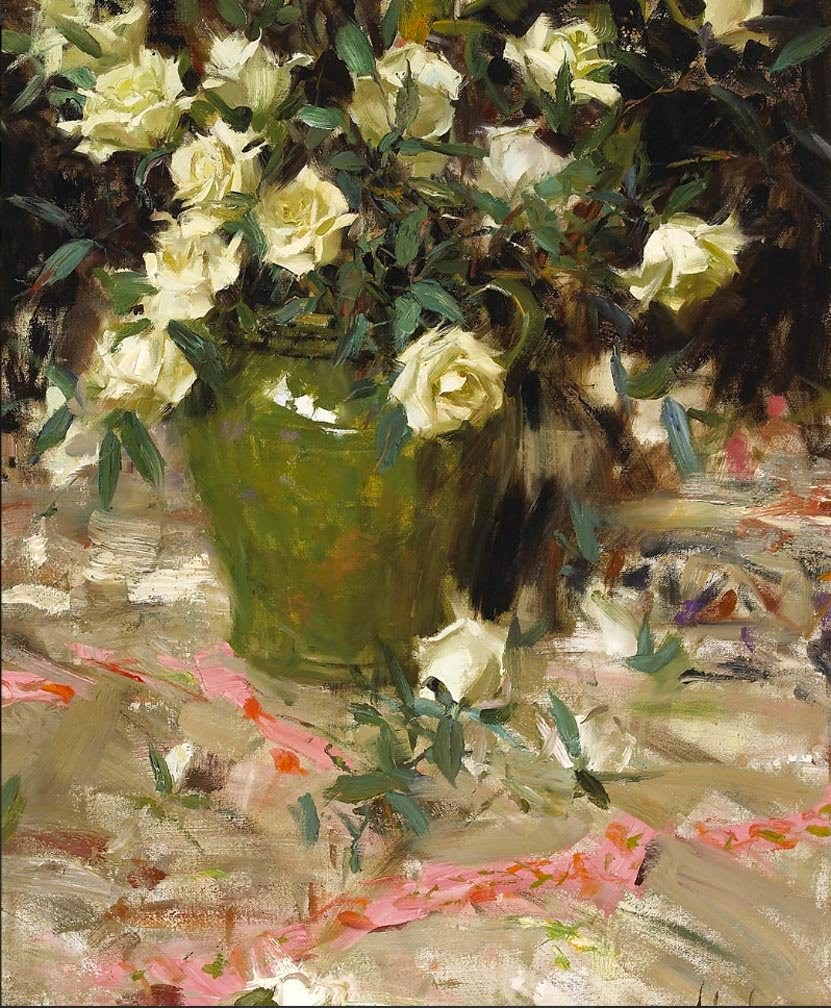 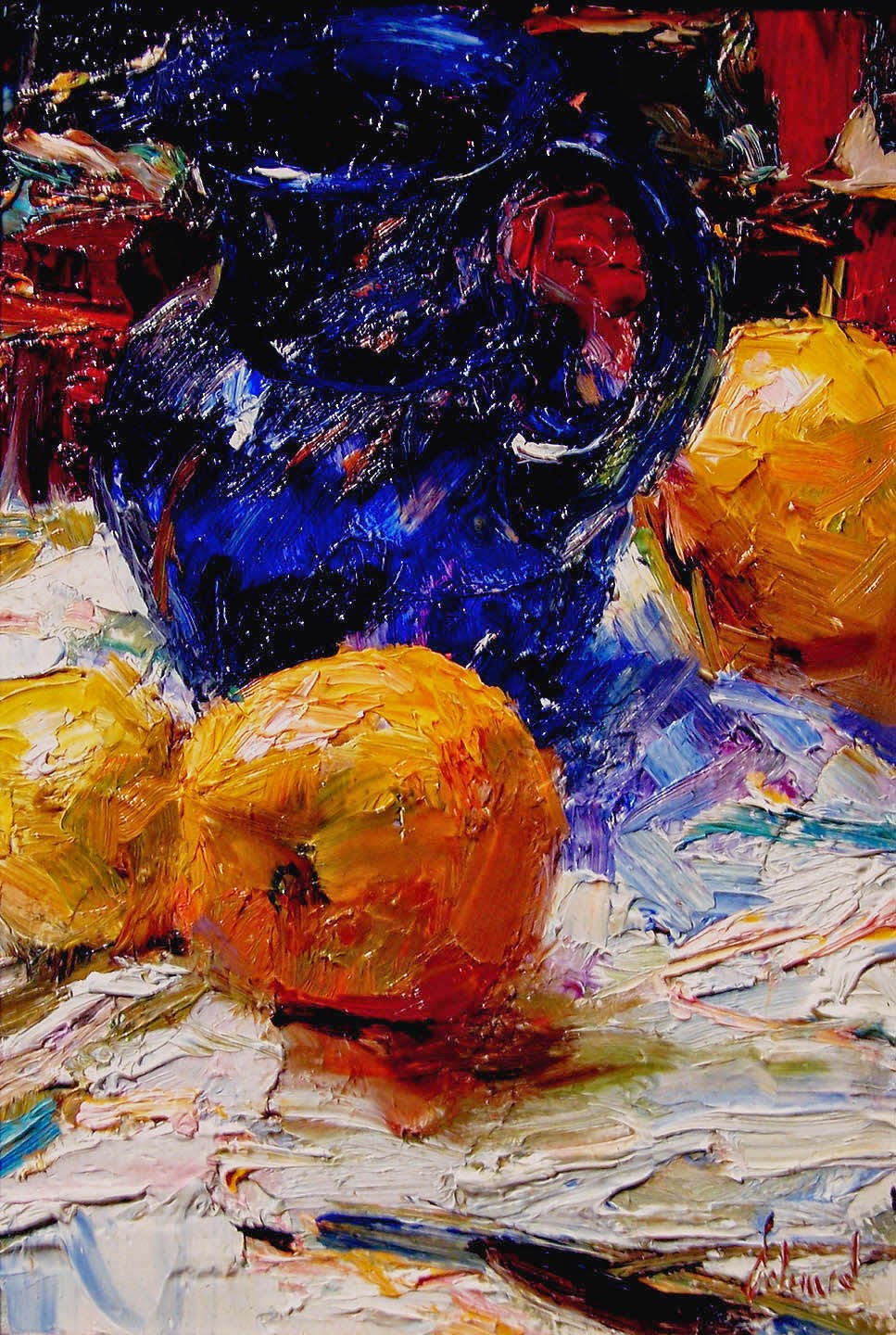 Still Life
From gbtate.com
Impressionistic, realistic, classical, romantic...while people don’t always agree on how to describe the art of Richard Schmid, there is no mistaking it. Painterly brushstrokes, meticulous composition, subtle tonality and use of luxurious, luminous color set his works distinctly apart. Schmid prefers to paint all prima, completing a work of extreme accuracy in just one sitting. The first brushstrokes blend with the last, conveying the excitement of the artist calls "immediate intimacy."
Schmid, born in Chicago in 1934, has spent many years sketching and painting throughout North America, Europe, South America and the Caribbean. His roving nature also applies to his subject matter; restlessly, he captures everything in sight, composing landscapes, nudes, wildlife, still lifes and children’s portraits. Schmid credits his instructors the landscape painter Gianni Cilfone and Professor William Mosby of Chicago’s American Academy of Art for much of his success. (greenwichworkshop.com)
Mosby, a graduate of the Belgian Royal Academy in Brussels and the Superior Institute in Antwerp, was an expert on European and American realism. Studies with him involved working exclusively from life, at first using the conceptual and technical methods of the Flemish, Dutch, and Spanish masters, and eventually incorporating methods from all of the late 19th century European and American painters.
The emphasis in each period was on Alla Prima (e.g., Direct Painting) systems of the various periods. Building upon this foundation, Schmid’s individual style and the content of his work developed along personal lines.
(artmatch4u.com)

Morning light
From flickr.com
Schmid also acknowledges a debt to the great masters, among them the Spanish portraitists Goya and Velasquez and the Impressionists Cassatt and Manet. His work has been widely acclaimed. He has won the Allied Artists of America Gold Medal, the American Watercolor Society Gold Medal, and won the top award in the 1987 National Parks Academy. He has had no less than 41 one-man shows and his work has been exhibited at the National Academy of Design, the Smithsonian, the Gilcrease Institute and the Beijing Exhibition Center in China.
(greenwichworkshop.com) 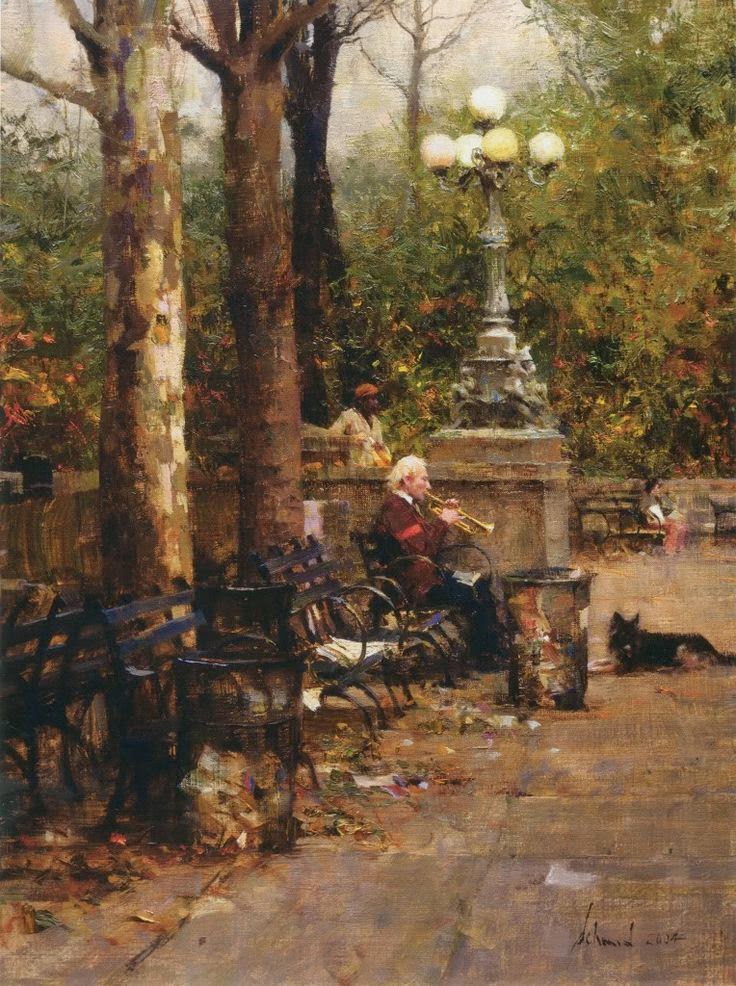 No Title
From pinterest.com
Richard Schmid’s life’s work has had a major impact on the art world. In addition to spending time creating his own works of art, he generously shares his time, knowledge and resources promoting excellence in fine art. His public appearances include workshops, charity events, lectures, and media interviews.
In January 1989, Richard Schmid launched his independent publishing company, Stove Prairie Press, LLC, with the printing of his instructional book, Alla Prima, Everything I Know About Painting. He has written and self published several art books and produced numerous instructional DVDs.
(artmatch4u.com) 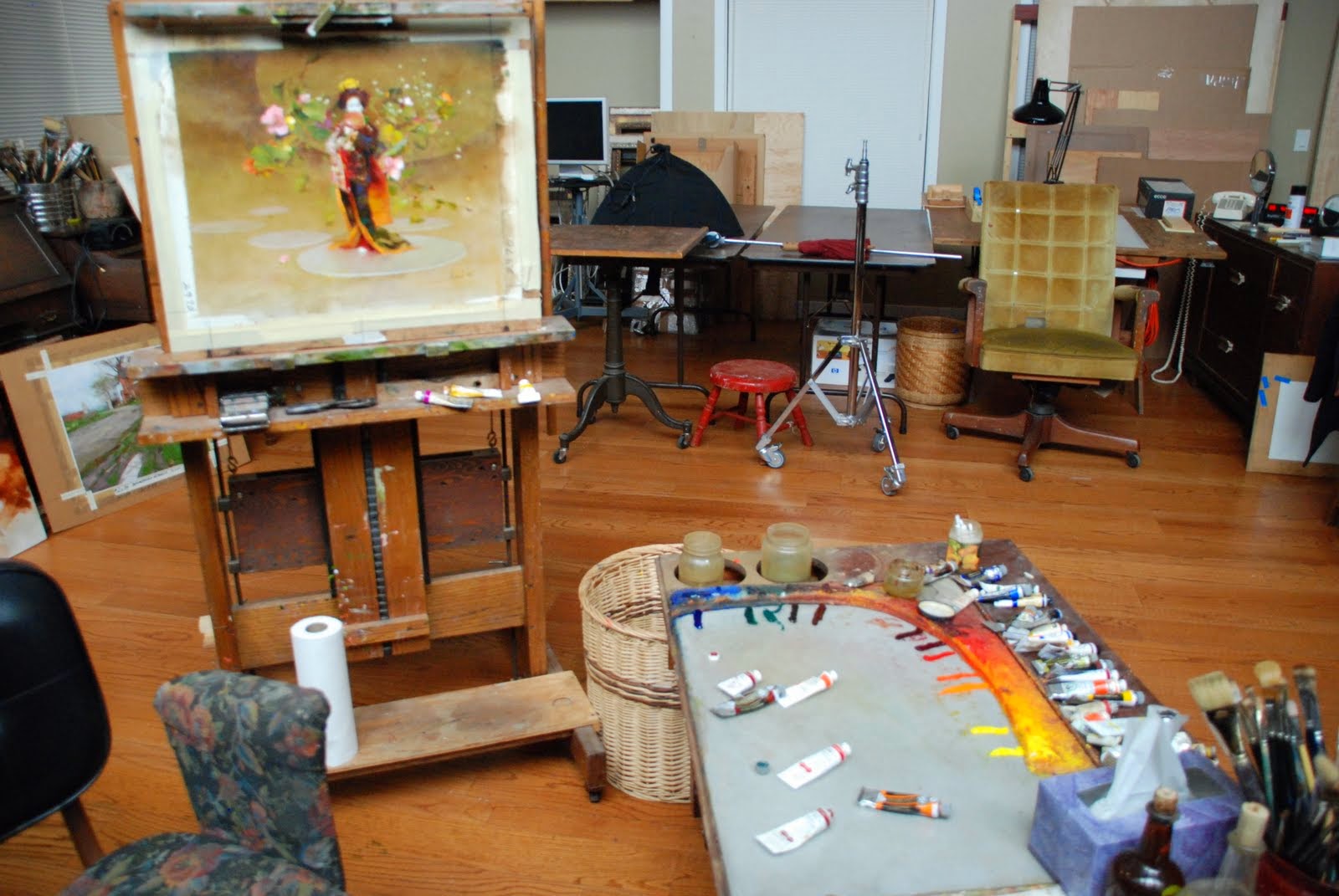 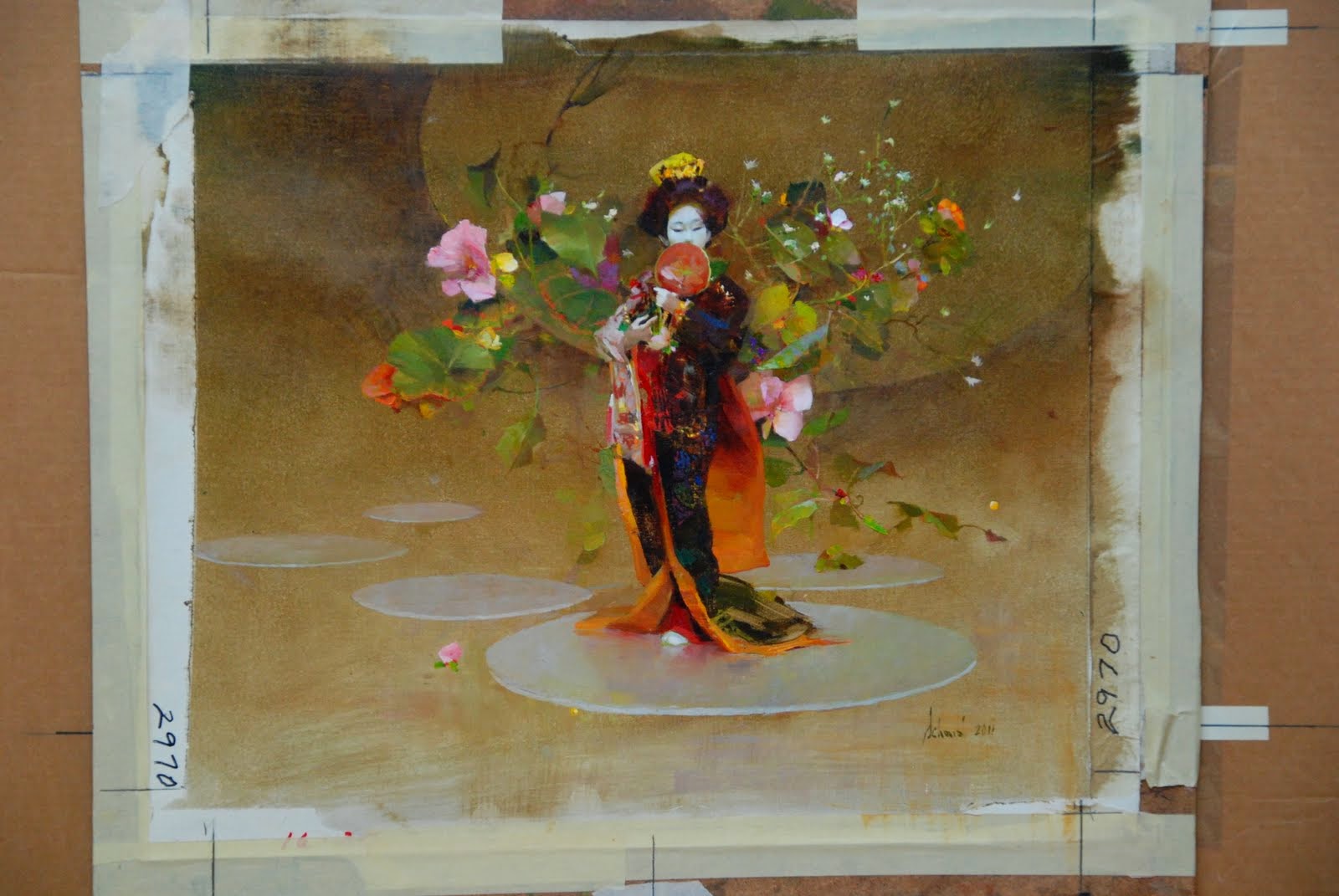 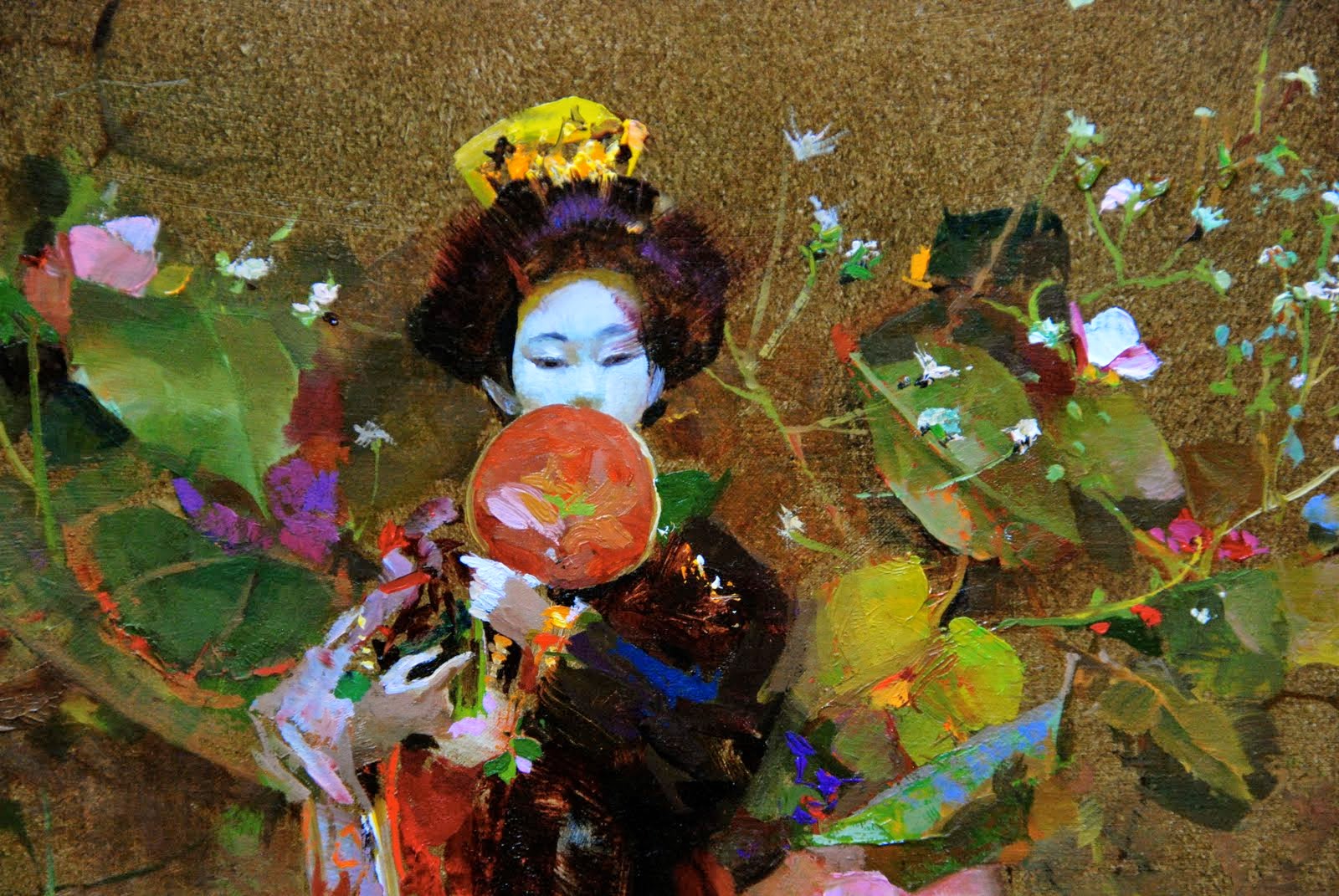 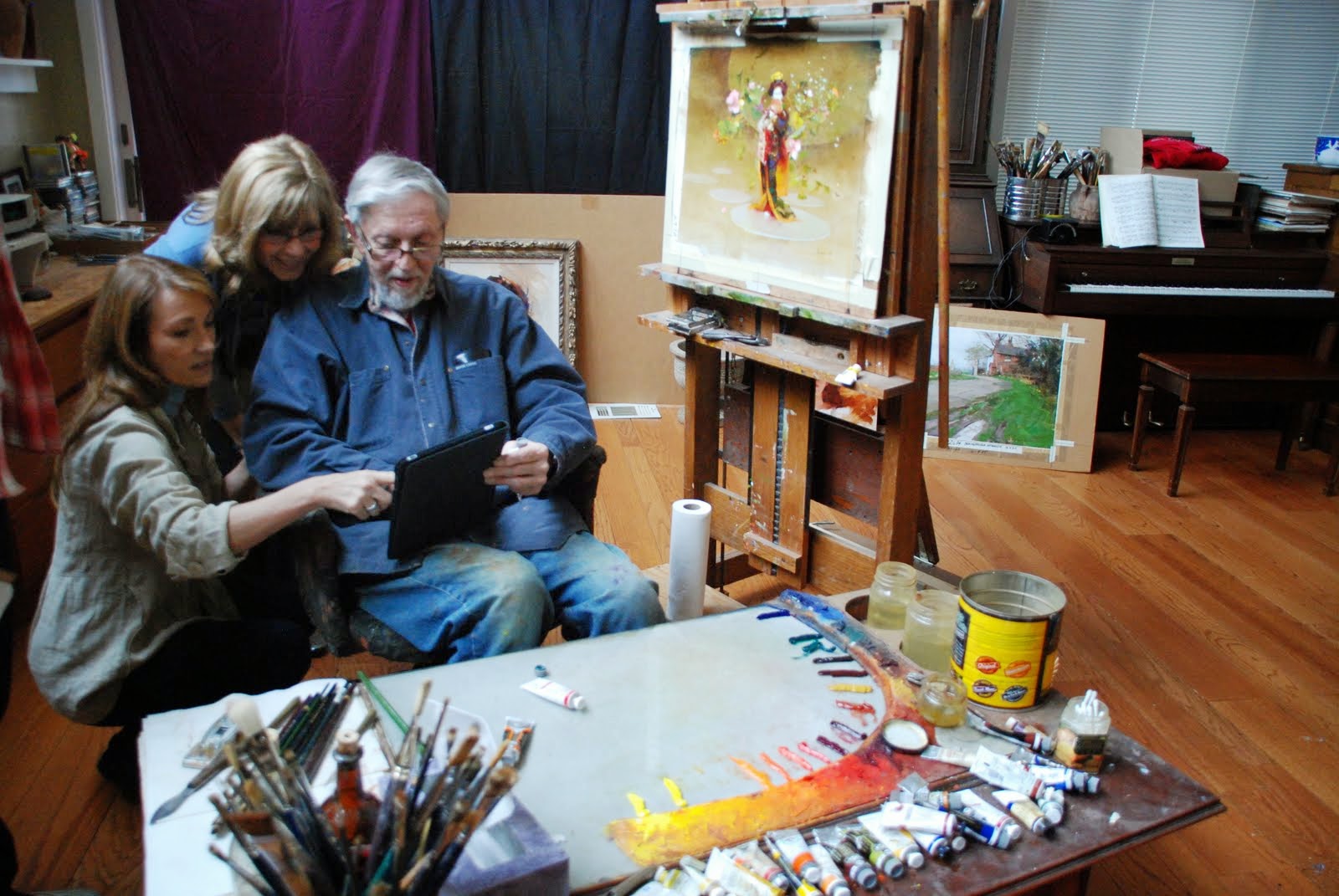 Richard Schmid studio and palette
All images from michelledunawayartist.blogspot.com
Richard Schmid's work has been represented in the following:
The Smithsonian Institution
The National Academy of Sciences
The Pennsylvania Academy of Fine Arts
The Art Institute of Chicago
The Harvard Club
The Connecticut Academy of Fine Arts
The National Academy of Design
The American Watercolor Society
The Thomas Gilcrease Museum
The Frye Museum
The Allied Artists of America The Colorado Historical Society
The Butler Institute of American Art
The Holter Museum The St. Louis Artist’s Guild
The Colorado Springs Fine Arts Center
The Salmagundi Club
The Tucson Museum of Art
The Albuquerque Museum of Art
The Loveland Museum
The Beijing Exhibition Center, China
(richardschmid.com)
Posted by BEAUTIFUL PAINTINGS at 1:30 AM No comments: