Born Zhao Kalin in Bengbu 1961, the artist has become an important Chinese master of contemporary realism. At an early age, Kailin understood that he wanted to be involved in the arts. "By eight, I knew I wanted to be a painter," Zhao relates. "It was my second grade teacher in elementary school who taught me basic painting skills and encouraged and challenged me. Most important, she taught me how to soar with imaginary wings through the secret world of art." Under her tutelage, Zhao's painting abilities matured, so much so that his work began appearing in juried shows in Bengbu.
(odonwagnergallery.com) 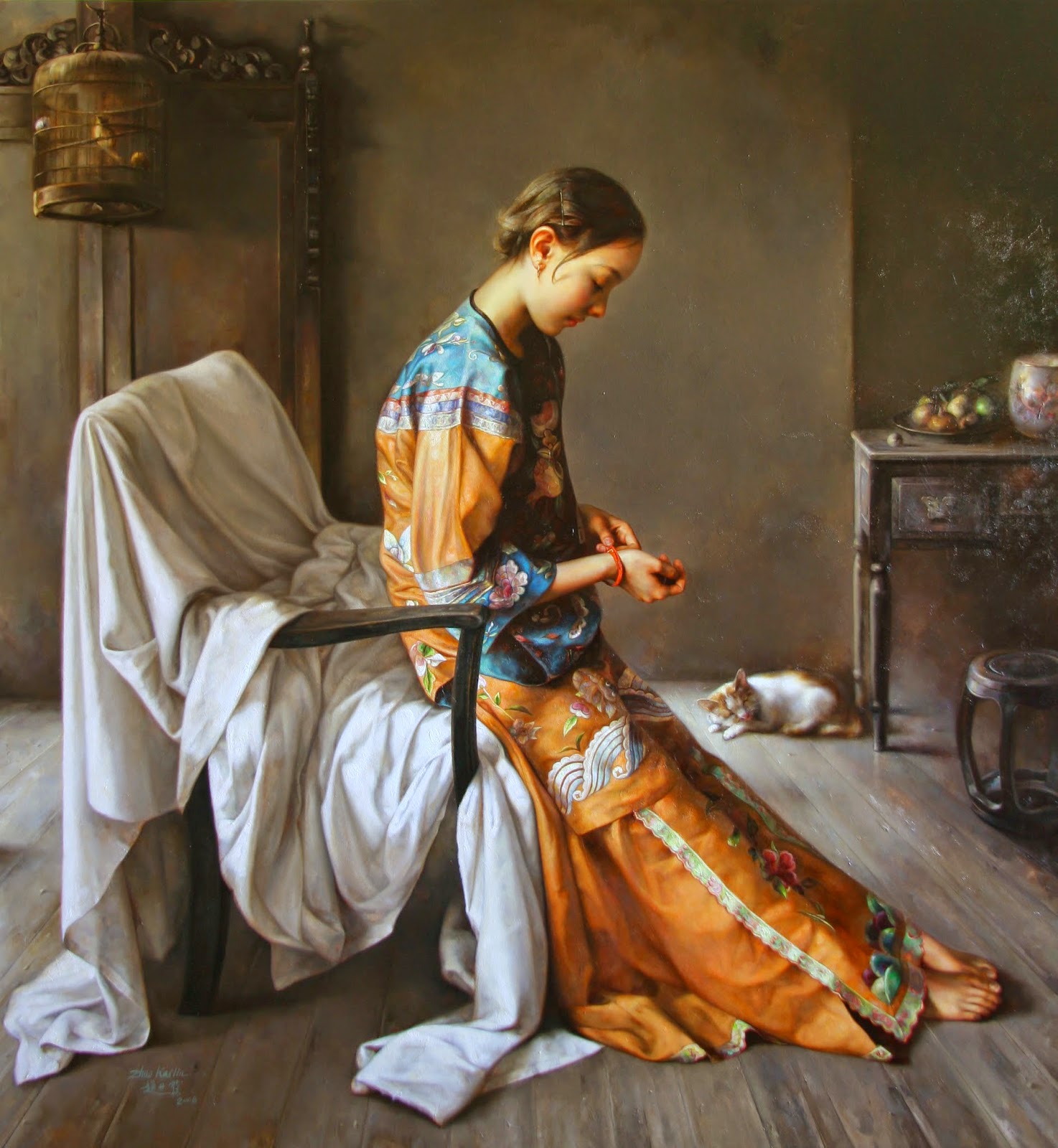 Return to My Hometown 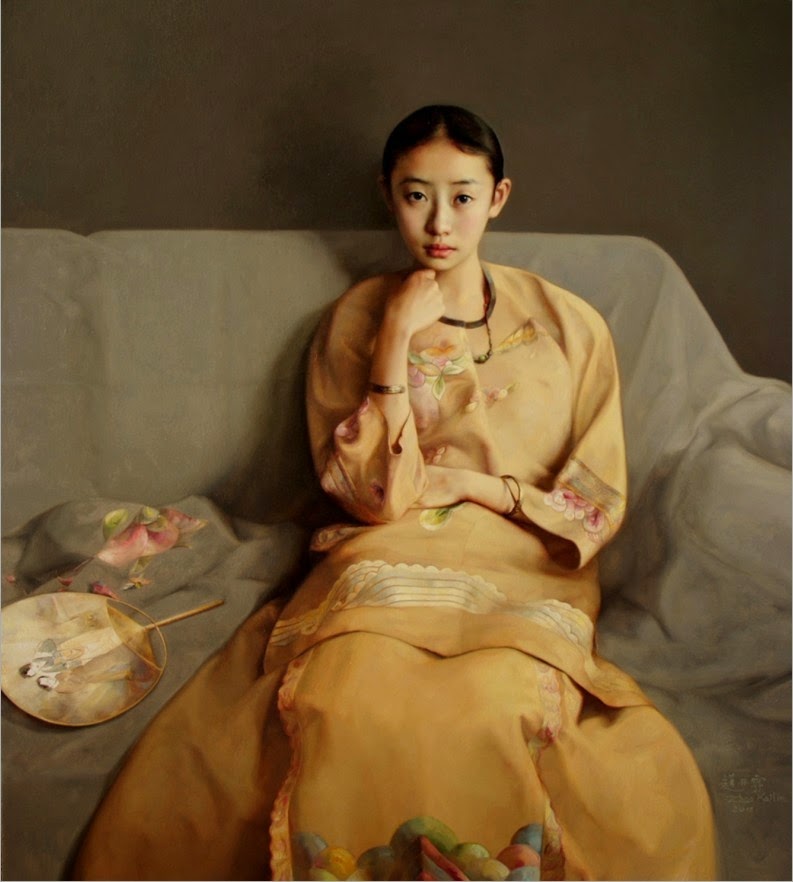 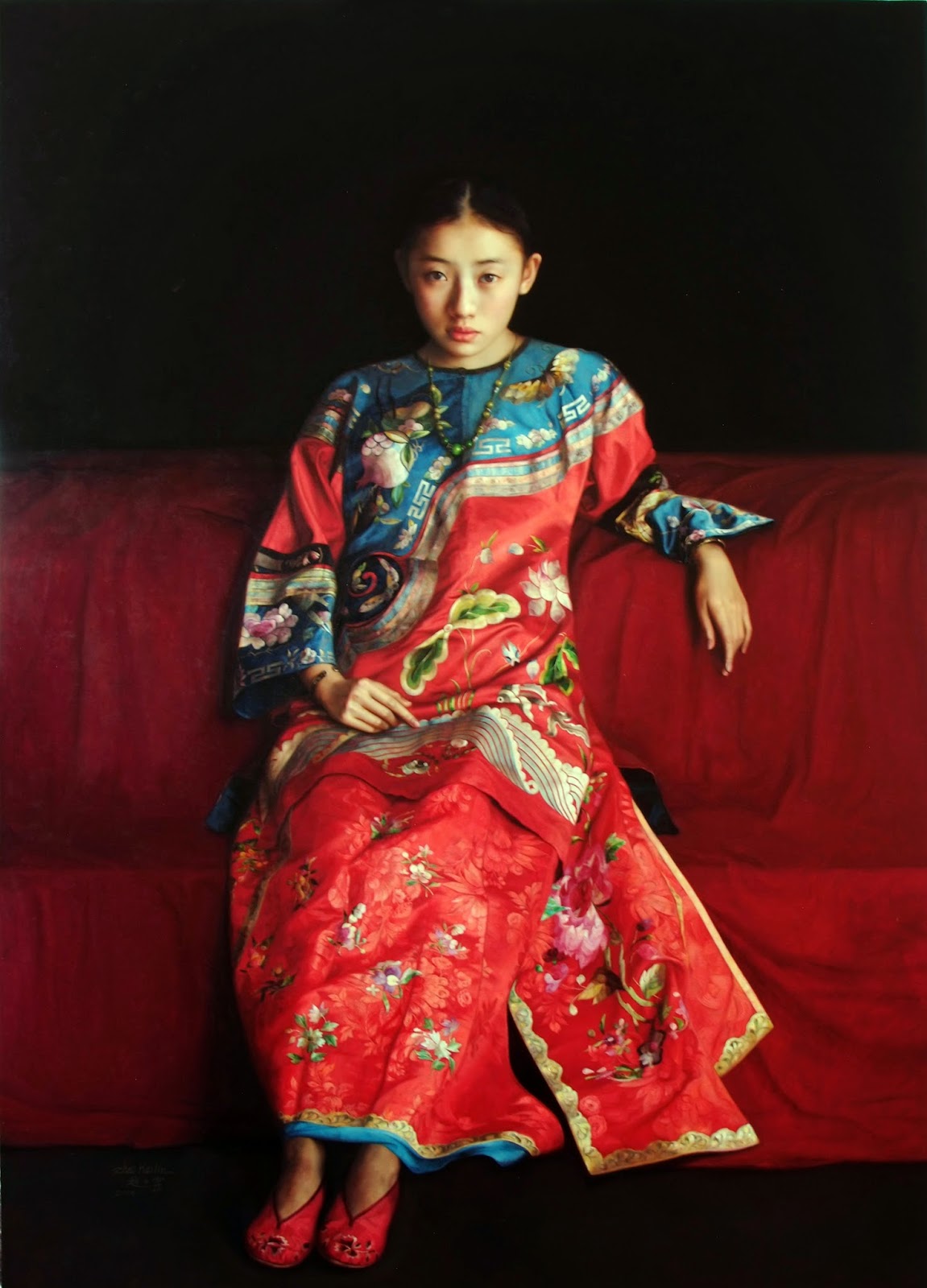 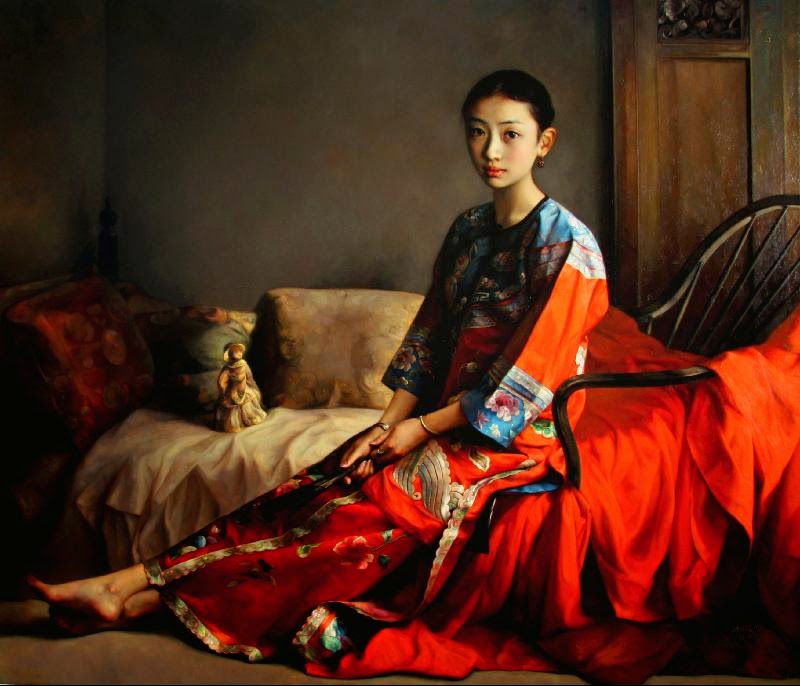 Memories of My Youth
From artadoo.com 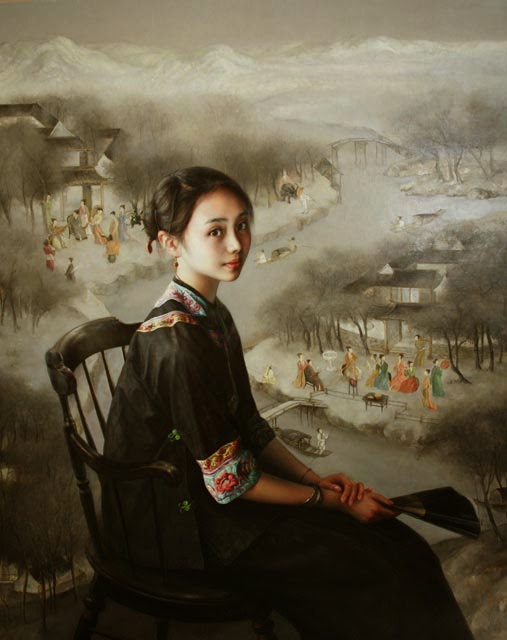 The title,"Beautiful Memory of Qiuxiang ", pays homage to an opera based on a legend about Tang Bohu .......During a trip to the West Lake, gifted scholar Tang Bohu falls in love at first sight with Qiuxiang, a maid in the residence of Hua Hongshan, a ranking official. For Qiuxiang's sake, Tang forgoes his noble status to serve as an attendant in Hua's residence. There he unfortunately meets his cousin sister and ex-lover Feng Yulan. An emotional entanglement among Tang, Qiuxiang and Yulan evolves. Eventually, however, Yulan gives way to enable her cousin brother to marry his true love, Qiuxiang.
Zhao Kailin's choice to place this portrait of a sitting beauty in the foreground among the great painting styles of Song Dynasty Emperor/Painter Ji, Zhao and the great Ming painter Bohu, Tang is evidence of Kailin's admiration for his pedigree, for his cultural roots and for his rich heritage. The beautiful young women in Kailin's composition is a direct descendent and a symbol of the lineage that is the Great history of China
(contemporarychinesefineart.com) 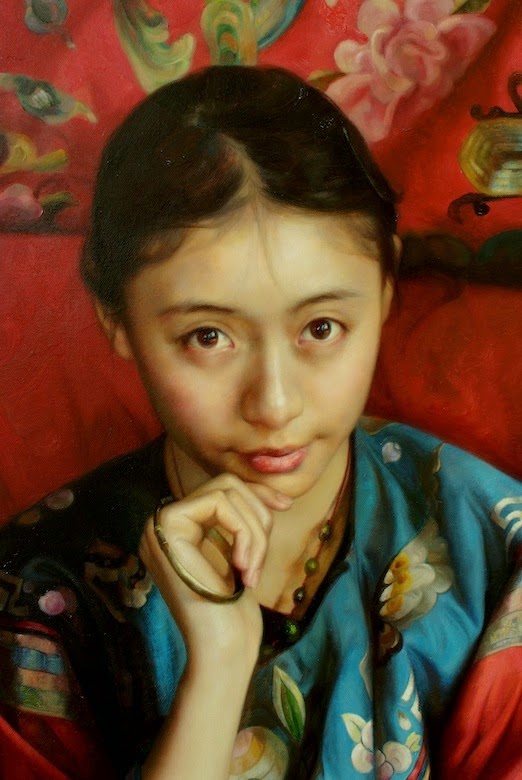 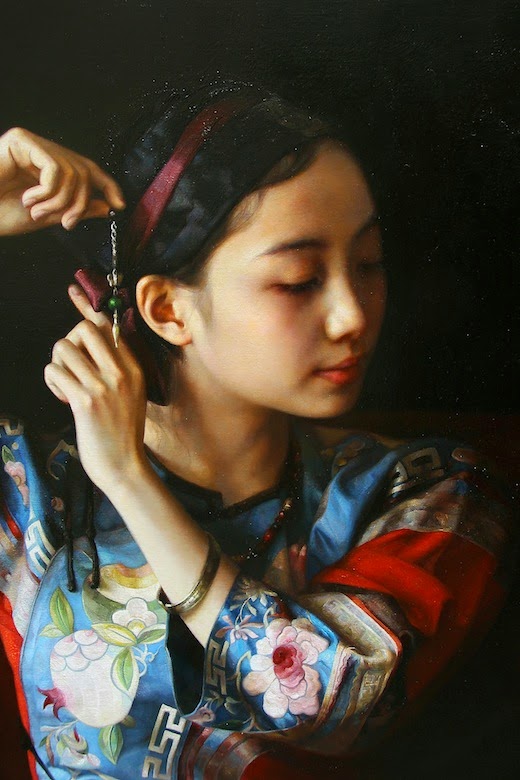 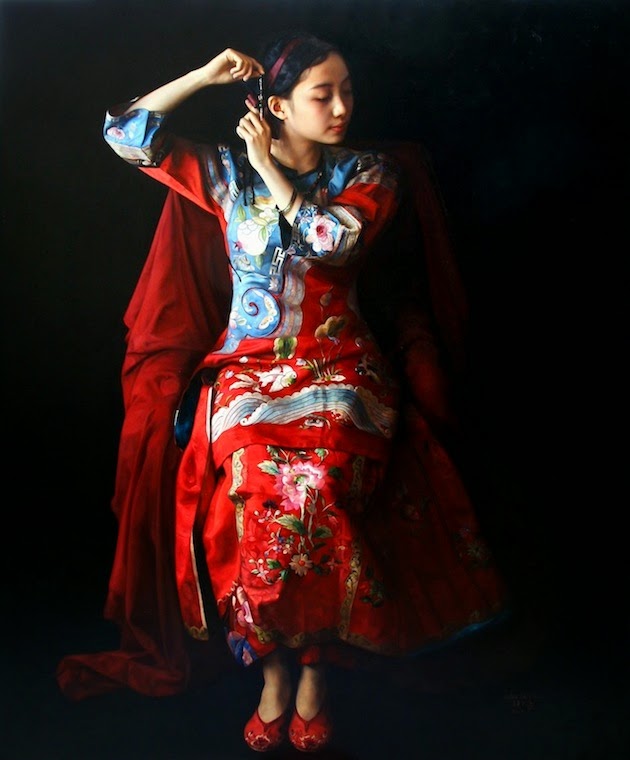 In 1988, Zhao Kailin was accepted for graduate studies at the prestigious oil painting department of Beijing's Central Academy of Fine Arts, China's most illustrious and rigorous fine arts institution. "From 1988 to 1990, I studied there and learned traditional western-style oil painting," states Zhao. "It was the most important period of art studies in my life."
During this period of intensive training, Zhao was exposed to the galvanizing portraits of Dutch Renaissance master Rembrandt Harmenszoon van Rijn (1606-1669) and was immediately taken with the work's luxuriant brushwork, jewel-like color and commanding manipulation of light and shadow inspired by Italian Renaissance painter Carravagio (1573-1610). It was during this same time that Zhao also became enamoured of the elegantly voluptuous society portraiture of American painter John Singer Sargent (1856-1925). Sargent's Madame X (1884), a full-figure portrait of a mysterious porcelain-skinned woman dressed in a long black dress that scandalized Paris's Salon of 1884, most certainly has left its silky mark on many of Zhao Kailin's portrait paintings.
More recently, Zhao's work has concentrated on depicting beautiful, introspective young women, most of whom are Asian and dressed in traditional Chinese attire. Several of the latest pieces feature females with musical instruments. These paintings capture the essential aura of young women suspended between the innocence of childhood and the smoldering sexuality of womanhood, evoking a sense of longing, dreams and desire.
"Every painting I do involves personal stories and memories," Zhao explains. "I am always striving to communicate not only the beauty and unspoken personal narratives of these women, but also the inherent beauty of Chinese culture and life."
Zhao Kailin's work has been shown in numerous solo and group exhibitions throughout Asia, Europe and the U.S. and is a part of notable public and private art collections. Winner of a number of awards for his work, and has been an influential mentor to a number of other painters currently represented exclusively by Contemporary Chinese Fine Art in Laguna Beach, California.
(contemporarychinesefineart.com) 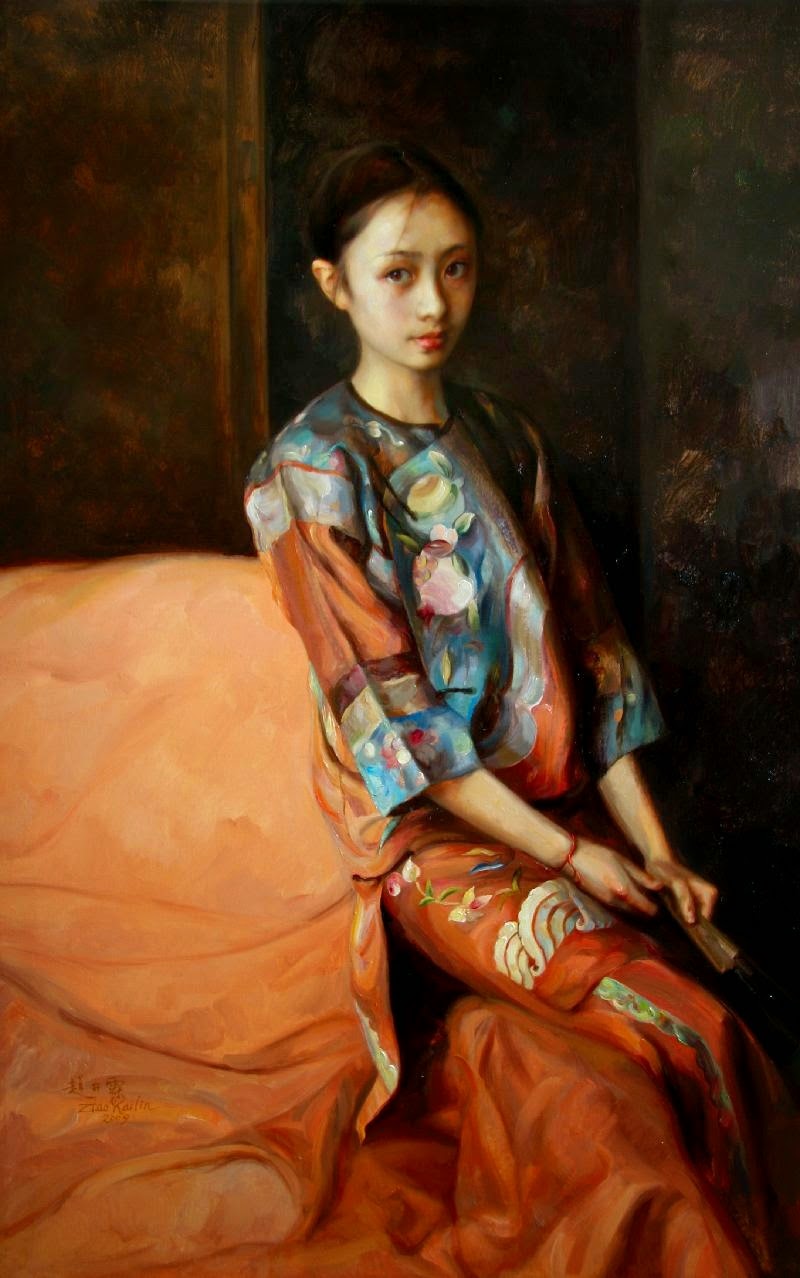 An Old Story of China
Images from absolutearts.com

Posted by BEAUTIFUL PAINTINGS at 12:16 PM No comments: